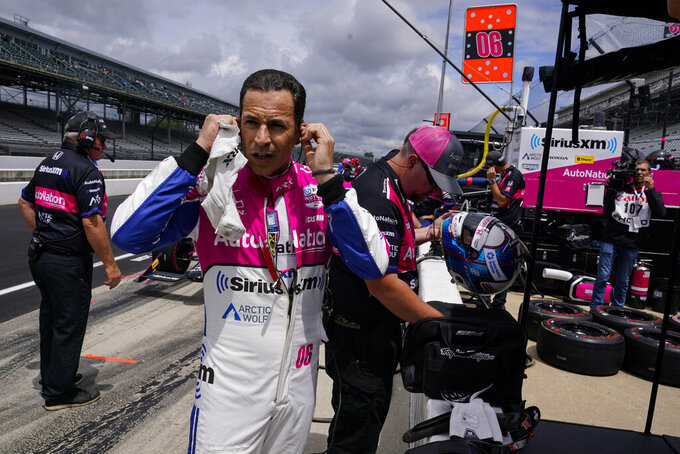 Helio Castroneves, of Brazil, prepares to drive before the final practice for the Indianapolis 500 auto race at Indianapolis Motor Speedway in Indianapolis, Friday, May 27, 2022. (AP Photo/Michael Conroy)

Justin Marks' own mother heard the rumor and texted her son, the owner of Trackhouse Racing, to find out if Helio Castroneves will be running the Daytona 500 for the NASCAR team.

That would be the logical spot for the four-time Indianapolis 500 winner who has longed to give NASCAR a shot. Don Hawk, the first-year CEO of the Superstar Racing Experience, told Castroneves that if he won one of the summer all-star series races, Hawk would help Castroneves get a NASCAR start.

Well, Castroneves won the SRX opener last Saturday night, and Hawk has been burning up the phone lines since.

“My side job is representing Mr. Castroneves,” Hawk said. “Phone calls have been taking place, the ball is rolling. We’re not ready to say a whole lot publicly. But the ball is rolling. It all depends on how this thing rolls out, whether we’re going to look at more than one race or optional races.

"The intention originally was he really wanted to run in the Daytona 500, it was a crown jewel. And so we’re really going to try to make the Daytona 500 work.”

Because of the Trackhouse program, speculation instantly turned to Project91 as the landing spot for Castroneves. He's won Indianapolis four times, the Rolex 24 at Daytona twice and an IMSA sports car championship, but could never convince Roger Penske to give him a shot in NASCAR.

Marks told The Associated Press that he has not spoken to Hawk about Castroneves, but “my mom texted me and asked ‘Are you talking to Helio?’”

Castroneves doesn't know what deals Hawk might be working, but he's very serious about getting into next year's Daytona 500. He will be 47 years old when “The Great American Race” rolls around next February and now drives for Meyer Shank Racing in IndyCar, a team that does not prohibit him from extracurricular racing.

"I know it will be tough, but hey, who knows, in racing you never expect how things could be surprising. Hopefully I’m going to get into it with Don and be in the Daytona 500 for sure.”

Part of Tony Stewart's hope in creating SRX last year was that it would help drivers find other opportunities and it worked in its inaugural season. Ernie Francis Jr., a seven-time class champion in the Trans Am Series, caught Penske's eye when he won the SRX race in Indianapolis, and it led to a full-time ride this year in the Indy Lights Series.

He was already on the plane headed to Pensacola last Friday night when it was discovered SRX did not know he was coming. SRX had available cars — the premise of the series is that all the cars are equally prepared for star drivers from multiple formulas of racing — and had one ready for Castroneves when he arrived.

“It shows you that the 16 cars we prepared are really what we say they are, they’re equal cars. That car was not even going to be raced and it won," Hawk said. "He started scratch on the field and he won. There’s so many things that went in the right direction. We had four spare cars, any one of them you could just put your seat insert in and we’re good to go.”

SRX races this Saturday night live on CBS at South Boston Speedway in Virginia. Peyton Sellers, a native of Danville, Virginia, and and six-time South Boston track champion, is the weekly “ringer” entered in the field.