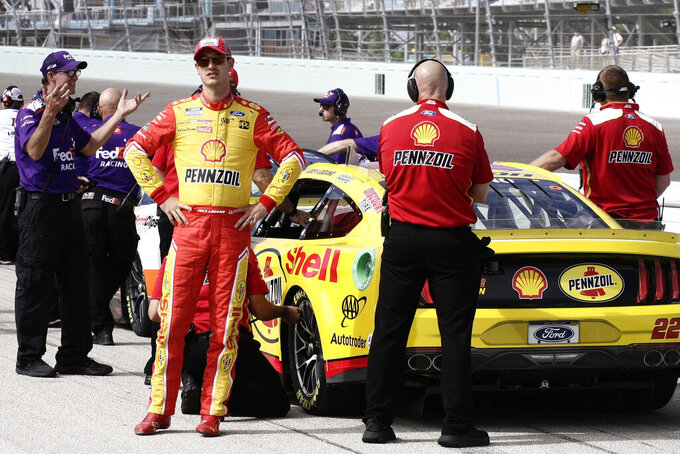 Ryan Blaney gets his crew chief back for the most important weekend of his NASCAR season after an untimely suspension. The first task for Jonathan Hassler? Get his driver a strong starting spot in the last race to qualify for the championship.

There are three spots up for grab at Martinsville Speedway on Sunday race, and Joey Logano is the only driver qualified for next week's winner-take-all final four at Phoenix Raceway.

Seven drivers are vying for the final three positions and starting position will be critical. The spring stop at the paperclip-shaped 0.526-mile short track was a passing nightmare with only five lead changes and four cautions — two of which were for stage breaks.

Blaney was one of four drivers to lead, but his Ford was out front for a measly five laps in a race dominated by winner William Byron and Hendrick Motorsports teammate Chase Elliott. They combined to lead all but six of the 403 laps.

Denny Hamlin, Blaney, Christopher Bell and Chase Briscoe are all below the cutline headed into Sunday, with Bell and Briscoe essentially needing a victory to make the final four. Ross Chastain, Elliott and Byron are above the cutline, and only 32 points separate Chastain in second from Blaney in sixth.

Blaney is hopeful a June test at Martinsville helped Goodyear develop a better-performing tire that will make this weekend's race more competitive. He also noted that “it's going to be warmer this weekend than it was in the spring.”

And if the product isn't any better? Well, Blaney predicts the remaining playoff drivers will get desperate toward the end of the race for every possible position.

“If you get some cautions toward the end of this thing, then pandemonium ensues," Blaney said. "You've seen that, especially in this race, when its the last chance for guys to get into the (finale). If they're in position, they're going to be aggressive.

“Almost always if you get cautions at the end of one of these playoff races, at short tracks, you're going to have some pretty hard racing and a bunch of contact. So tighten your belts and hope you are on the giving end of it and not the receiving end.”

As for the return of Hassler — one of many crew chiefs to receive four-race suspensions this season for loose wheels on the new Next Gen car — Blaney hopes it gets him into victory lane for his first points-paying win this season. He won the All-Star race but it didn't count in the standings, where he's hovered in the top three almost the entire season.

It began to unravel, literally, when Blaney's Team Penske crew allowed a wheel to roll off the No. 12 at Bristol in September to draw the automatic four-race suspensions, which began at Talladega Superspeedway at the start of October. Blaney managed a second-place finish there, but was 26th at Charlotte in the final race of the second round of the playoffs.

Blaney opened the third round with a 28th-place finish at Las Vegas, and after contending at Homestead-Miami Speedway for most of last week's race, he spun coming off of pit road and finished 17th.

“Those situations at Vegas and Homestead are all on me,” Blaney said. “There’s no ifs, ands, or buts or ways around it. It’s all on me making mistakes and (Hassler) gets it. The biggest thing we talk about is we win or lose as a team. ... The past couple of weeks they’ve brought really good cars and I’ve just let them down. So he and I talked about it really quickly, and then it’s just full shift. You get over that. Learn from it."

In just his first season with Trackhouse Racing and second full season in the Cup Series, Chastain finds himself on the verge of racing for a championship.

The eighth-generation Florida watermelon farmer scored the first two Cup wins of his career this season, but has also irked fellow competitors with aggressive driving and unneeded moves.

Chastain had to change his approach to close in on a spot in the final four, and it showed the last two races as he settled for back-to-back runner-up finishes rather than trying to move the leader to earn the automatic berth into the finale.

“I had to stop living in the moment of each lap and definitely race with a mindset of a broader look across the whole season and see that the entire body of work will get me a lot farther than one pass," Chastain said. "Just putting a lot at risk for, like, seventh, and why did that really matter?

“Then, when we get in those positions to win or to go for that spot late, it becomes a whole lot easier when you have just done it a better way than two months before. These guys have incredible memories, and as I have evolved and learned, it’s been easier to race, and that has been nice.”

Elliott is the Martinsville favorite, per FanDuel Sportsbook. ... The winner of Martinsville has gone one to win the championship seven times, most recently Chase Elliott in 2020. ... The worst finish in a playoff race at Martinsville by a driver that went on to win the title was 33rd by Kevin Harvick in 2014. ... Keith Rhodden was named crew chief for Austin Dillon for 2023 at Richard Childress Racing. Rodden most recently worked on the motorsports competition NASCAR strategy group at General Motors. Rodden is a former crew chief noted for his time with Kasey Kahne at Hendrick Motorsports. ... Petty GMS Motorsports has hired crew chief Luke Lambert to move with driver Noah Gragson from JR Motorsports to the No. 42 Cup car next season. Gragson and Lambert will race for the Xfinity Series championship next weekend.