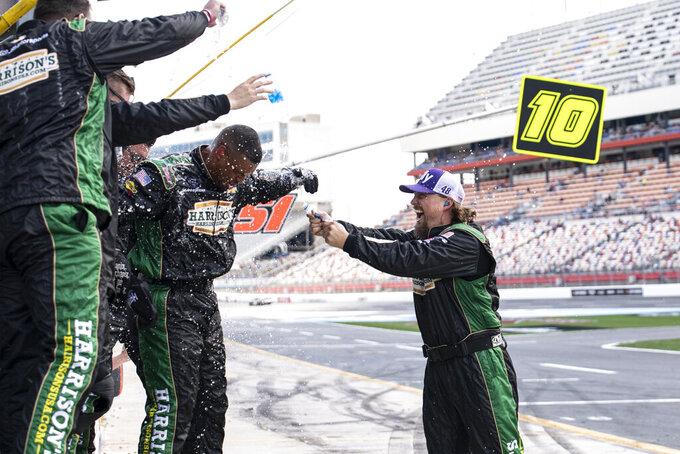 Berry took the lead with 22 laps to go when Allgaier got loose and brushed the outside wall in Turn 1. Berry slowly pulled away and won by more than 18 seconds while Allgaier finished seventh after experiencing a leaky tire.

Berry led 89 laps. He has won four career Xfinity races in 47 starts, including a victory earlier this year at Dover.

JR Motorsports has won 63 Xfinity Series races and two Trucks races, but this was the first win at CMS. Berry said it was rewarding to get that monkey off the company's back.

“I have been an employee at Junior Motorsports since 2010 and I've seen them struggle a lot at Charlotte,” Berry said. “We all knew this was going to be a great benchmark. I think I can speak for everybody there saying I think this exceeded our expectations.”

Berry and Allgaier raced neck and neck for most of the second half of the race on a sunny afternoon.

“It’s kind of how it has been all year,” Berry said. “We find ourselves racing each other. It seems like more than not it has been me and Justin.”

Allgaier led 63 laps, but his chances of winning ended after he hit the wall. That ended any chance of a dramatic finish after the two cars had been steadily racing more than 15 seconds ahead of the rest of the pack.

With Allgaier out of the picture, it was smooth sailing for Berry.

“After the first contact I felt like the tire was going soft and I had to pit,” Allgaier said. “... We laid it all on the table and neither of us were going to give an edge."

There were eight cautions in the race.

Berry emerged as the Stage 1 winner, even though Noah Gragson led 32 of the race's first 40 laps. Allgaier won the second stage.

Xfinity Series leader A.J. Allmendinger lost air in his tire in the second half of the race, costing him a chance at a win. He finished in 19th place.

Austin Dillon was involved in a crash on Lap 110 that took out four other cars after his tire went down and sent him careening into the outside wall. Among those caught up in the wreck were Ryan Seig, Stefan Parsons, Joe Graf Jr. and Anthony Alfredo.

“There was nowhere to go and we got hit from all four sides, or at least it felt like it,” Alfredo said.

Nicholas Sanchez, who started 31st, lost a lap when he left the pits with a tire jack stuck under the right side of his black No. 99 Chevy. He ran an entire lap with the jack sticking out from underneath the car before having to pit again.