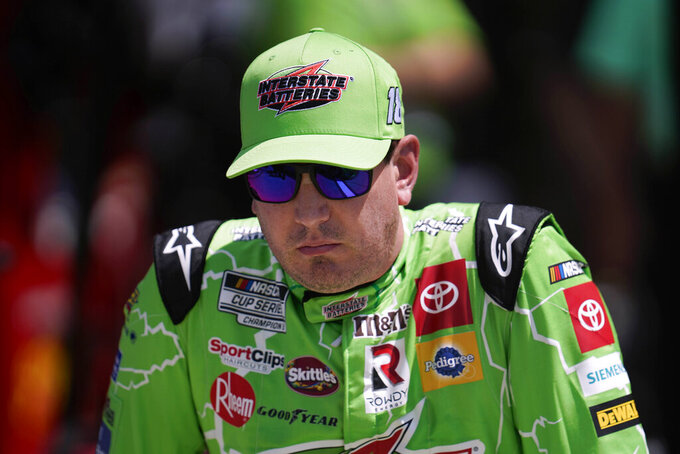 Busch, his wife and their two children escaped the Mall of America in Minnesota after shots were fired, three days before racing at Michigan International Speedway.

“If you look at that dark cloud that’s over me lately, hence the other day, we’re in the wrong place at the wrong time a lot of times," Busch said Saturday.

When shots were fired Thursday, Busch and his son Brexton were waiting in line to ride a roller coaster while his wife, Samantha, and their daughter, Lennix, were shopping elsewhere in the largest mall in the country.

“It’s a lot to process as an adult but really hard as a parent to explain to your child what happened," Samantha wrote in a post on Instagram.

Bloomington Police Chief Booker T. Hodges said no one was struck by the gunfire, adding on Friday that the department was still searching for two people involved in the shooting.

The harrowing experience, though, did not appear to give Busch a newfound perspective on his life and career. A two-time NASCR champion, he does not have a contract for next season and that appears to be his chief concern.

“This is a performance-based business," said Busch, who will start third in the FireKeepers Casino 400 on Sunday. “So it is life-or-death fear if you’ve either got a job and you’re working and you’re making a living, or you’re at home figuring out what your next steps are.

“I’ve kind of thought about that like, `OK, what are my next steps? What do I do if I don’t continue to race? And I have no idea. I have no clue."

Busch, the 2015 and 2019 NASCAR champion and winner of 60 career Cup races, has one victory this year and is ranked 11th in points.

Over the last seven races, Busch has failed to finish within the top 10. That stretch includes a 36th-place finish at Pocono two weeks ago after he and Joe Gibbs Racing teammate Denny Hamlin, who won the race, were disqualified because their Toyotas failed inspections.

“It’s a matter of luck, and there is absolutely none following the 18 car right now,” Busch said.

Bubba Wallace won his first career pole Saturday, becoming the only driver to break 190 mph in the Next Gen car during qualifying this season. Wallace also gave 23XI Racing, formed by Charlotte Hornets owner Michael Jordan and Denny Hamlin in 2020, its first pole.

“With the speed that we have, there’s no reason that we can’t go out and win," said Wallace, who became the second Black driver to win a Cup race 10 months ago at Talladega Superspeedway.

Four races remain in the regular season, creating a sense of urgency to qualify for the playoffs. That's true even for some drivers who have won a race.

NASCAR has had 14 different Cup winners this season, closing in on the playoff-era record of 16 set last year. If a new mark is made and there are three new winners over the next four races, one driver with a victory would be eliminated from the 16-car playoff with a tiebreaker based on points.

Chase Briscoe, who has one victory and is No. 12 in points, is confident his postseason bid is safe if there is not a new winner at MIS, though he would love to seal a spot on his own.

“Another win would be the easiest way to take the pressure off 100%,” said Briscoe, who will start 23rd in the 37-car field in the No. 14 Ford for Stewart-Haas Racing.

Ford is hoping its previous success on the track in its backyard will provide a much-needed boost.

The manufacture has won seven straight Cup races, including last year with Ryan Blaney, on the two-mile oval about 50 miles west of its world headquarters in the Motor City.

This season, though, Ford has gone two months without a victory since Joey Logano won his second race in 2022.

“If you’re not the one making the move, a move is going to be put on you,” he said.

Toyota has the top three starting positions, including Christopher Bell, who was second in qualifying. ... Kevin Harvick has not won since Sept. 19, 2020 but does lead all active drivers with five wins at Michigan. ... Kurt Busch is missing his third straight race with concussion-like symptoms after crashing July 23 in qualifying at Pocono Raceway. Ty Gibbs is filling in for him in the No. 45 Toyota for 23XI Racing. ... Austin Hill is making his Cup debut for Richard Childress Racing. ... Kyle Busch is a 6-1 favorite to win, per FanDuel Sportsbook.