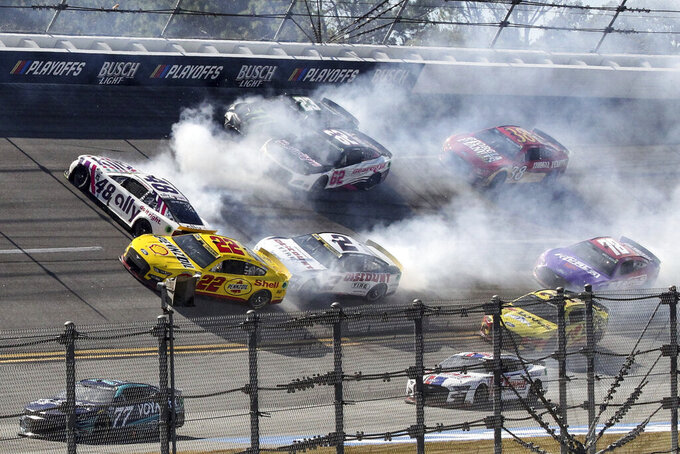 LAS VEGAS (AP) — NASCAR held a second consecutive meeting with its Cup drivers to discuss their safety concerns with the new Next Gen car and promised to continue the sessions for the remaining month of the season.

Saturday's meeting at Las Vegas Motor Speedway lasted 75 minutes, the same length as last week's contentious session at Charlotte Motor Speedway. NASCAR had a lengthy slide presentation for the drivers since the one at Charlotte was halted when the meeting deteriorated into an emotional confrontation between drivers and NASCAR leadership.

Several drivers last week likened the Charlotte meeting to an episode of “Seinfeld” as it became “an airing of grievances.” The Las Vegas meeting was much calmer and NASCAR was able to complete presentation, which was expanded to include information from questions raised by the drivers at Charlotte.

Kurt Busch and Alex Bowman both suffered concussions in what should have been routine crashes. Both drivers were injured when the rear of their car hit the wall.

Because the Next Gen was built to be durable, drivers have complained the rear is way too stiff and the drivers are absorbing far too much energy from impacts. Bowman has missed two races already and said he'll be out at least the next three, while Busch said Saturday after missing 13 consecutive races he will be stepping away from full time racing.

NASCAR thinks it has a fix for the rigidness of the rear of the Next Gen, with changes possible by the start of next season.

Corey LaJoie, who has sided with NASCAR in its development of the Next Gen, said NASCAR told the drivers at Charlotte that design changes it tested “takes about 50% of the G-load away on a rear impact.”

“You can always say we should have done it faster,” LaJoie said on his podcast “Stacking Pennies."

“But this stuff takes time. It’s not like NASCAR is just sitting on its hands, waiting for another guy to get hurt. Nobody is at more of a risk or detriments to seeing their competitors hurt than NASCAR is. When we were designing this car, safety was above and beyond every other checkpoint.”

There are four races remaining this season with the Next Gen — including Sunday at Las Vegas to open the third round of the playoffs.