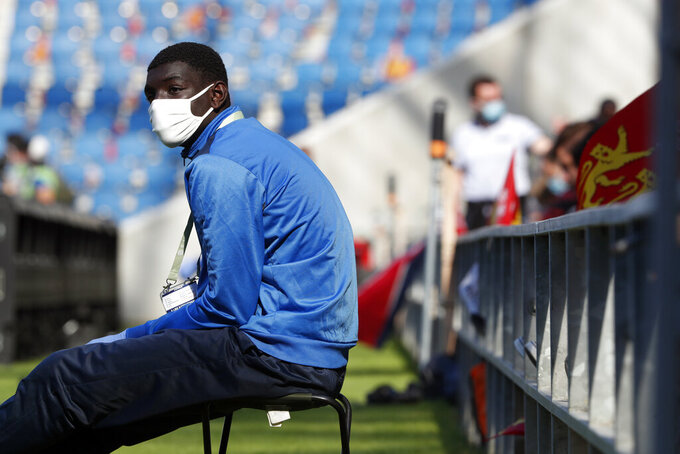 A ball carrier wears a face mask prior to the friendly soccer match between Paris Saint Germain and Le Havre, in Le Havre, western France, Sunday, July 12, 2020. For the first time since the coronavirus shut down sports and chased away spectators, Neymar, Kylian Mbappe and other soccer stars are going to play again in front of fans. (AP Photo/Thibault Camus)

AJ Pollock says he considered not playing this season after enduring a bout with COVID-19 and the premature birth of his daughter.

Pollock says he thinks he got the coronavirus while in the hospital with his daughter. He says he had two days of symptoms a month ago that included headache, body aches, congestion and loss of smell.

“Getting coronavirus for me put it into perspective,” he said. “I was staying at home and being careful and got it.”

Pollock had to stay away from his daughter for 14 days while in quarantine. The child is still hospitalized, but doing well. He says she never tested postive for the virus.

Pollock is confident he’ll be ready for the season opener next week. He missed much of the first half of last season after surgery for an elbow infection.

Milwaukee Bucks coach Mike Budenholzer confirmed that Eric Bledsoe tested positive for COVID-19, and remains cautiously optimistic the veteran point guard will be ready for the restart of the season.

“With the virus, you’re never sure,” Budenholzer said Friday. “There are certainly things that you have to kind of clear and cover, but the opener, if it’s two weeks away, then I think most medical, most things and research would say he is going to be available.’’

The Bucks, who have an NBA-leading 53-12 record, face the Boston Celtics on July 31 in their first game since the pandemic-imposed hiatus began in mid-March.

Budenholzer added that the Bucks will “prepare without him and welcome him with open arms when he does come.’’

The coach’s comments came one day after multiple reports indicated that Bledsoe said he had tested positive, but was asymptomatic.

Kansas City Royals pitcher Brad Keller, who had been out the last two weeks after testing positive for COVID-19, returned to the club Friday following a pair of negative tests.

He immediately hit the field for a 30-pitch bullpen session and had no issues.

Keller was the Royals’ starter opening day last year. Danny Duffy will take the ball in next Friday night’s opener in Cleveland.

“I’m feeling great now,” Keller said. “This morning I was cleared about 8:30, so that was probably one of the best phone calls I’ve had. I felt like I got called up to the big leagues or something. It was nuts.”

Earlier in the day, Royals prospects Nick Dini and Daniel Tillo tested positive for the virus. They are now quarantined.

Arizona has three positive coronavirus tests among 83 football players still on campus for voluntary offseason workouts. Two were asymptomatic and all three entered department protocols for self isolation.

Arizona has performed 366 test encounters including PCR, antigen and antibody testing among the players already on campus before the school paused bringing additional student-athletes to campus earlier this month.

None of the 28 staff members who have been on campus to support voluntary workouts have tested positive while on campus.

The Royals will use the stadium of the independent minor league Kansas City T-Bones, which is located across the state line in Kansas, as their secondary training site as the start of baseball’s abbreviated regular season approaches.

The T-Bones are not playing this season due to the coronavirus pandemic. That made their small but modern stadium near Kansas Speedway in Wyandotte County the perfect choice for Royals players to work out when they are not with the team.

The Royals also will use Kauffman Stadium as workout space when the team is playing on the road.

The league, which has teams in Washington, Idaho, Oregon, Montana and Alaska, said schools will be able to make individual decisions on organized practice activities, but no outside competition will be permitted.

The GNAC said it intends to make a decision on competitions beyond Nov. 30 by mid-October. The league also said it’s exploring options for fall sports to have a season, including the possibility of playing in the spring.

The NHRA has revised its schedule yet again, postponing its next two stops until further notice while adding a fourth race in the Indianapolis area.

Series officials announced that the events scheduled for Morrison. Colorado, on Aug. 7-9 and Brainerd, Minnesota, on Aug. 14-16 will not take place because of the COVID-19 pandemic.

The Indianapolis event replaces Morrison on the schedule and will host its third consecutive event with limited spectators, from Aug. 6-9. Qualifying will be broadcast by FS1 with the final round of eliminations airing on FOX. Indy also is scheduled to hold the U.S. Nationals in early September.

The family that owns Bandimere Speedway in Morrison issued a statement saying it was “dedicated” to finding a new date later this season. Brainerd International Speedway owner Kristi Copham offered similar sentiments in her statement.

“We are disappointed that we have to postpone our event,” she said. “But we hope that, by working closely with state and local authorities and NHRA, we can find a way to put on a nationals race later this season, especially for our fans, who deserve to enjoy a great weekend of NHRA drag racing. We appreciate everyone’s patience – our fans, vendors, staff and race teams -- as we try to work through the issues that would allow us to hold the event, and we’re continuing to work hard on it every day.”

Indiana University has put its voluntary football workouts on hold after six participants tested positive for COVID-19 this week.

Athletic department protocols require each person with a positive test to self-isolate until further notice as contract tracing begins. Anyone deemed to be in close contact with someone who has tested positive also will be quarantined.

Coach Tom Allen said earlier this summer that he would mix up the workout groups in an attempt to prevent the spread of the illness. He wanted to keep roommates in the same groups while splitting up position groups to avoid losing too many players.

The University of Michigan and Michigan State have announced has positive COVID-19 tests.

Michigan says 121 tests were conducted those days on athletes, coaches and staff with four positives. To date, the athletic department has reported 635 tests with eight positives. All the positive tests have been on athletes.

Michigan State announced it conducted testing on 38 athletes Monday, with three positives. None of the three people had taken part in workouts in the last two weeks. Three additional athletes will need to quarantine for 14 days, since they are roommates of the positive individuals. There were also 27 athletic department staff members who were tested July 13, with one person testing positive. The school said the staff member does not work with the programs back on campus and had no exposure to athletes.

Southeastern Conference schools will honor the scholarships of athletes who opt not to participate in fall competition because of concerns about COVID-19.

The league announced the decision Friday, saying the athletes will remain in good standing with their team. SEC’s Presidents and Chancellors voted unanimously on the issue based on a recommendation of the league’s athletic directors.

The SEC hasn’t announced plans for football and other fall sports yet. The league said it will determine later if the policy should be extended at least to the spring semester.

USA Diving has canceled the junior world trials after deciding not to send a team to the FINA world championships because of the COVID-19 pandemic.

The organization cited four reasons for making its decision — the health and safety of coaches and athletes, the inability to adequately train because of closed facilities, international travel restrictions and other national federations already announcing they wouldn’t compete.

The championships are scheduled for Nov. 29-Dec. 6 in Kiev, Ukraine

The Cardinals were scheduled to play host to Maine in the Sept. 3 season-opener — before the Black Bears and the Colonial Athletic Association announced they had suspended the fall sports season.

Ball State’s road trips to Indiana and Michigan were canceled last week when the Big Ten opted to conduct a league-only schedule, a move that reportedly will cost the Mid-American Conference school almost $1.7 million in guaranteed money.

If replacement teams cannot be lined up, the Cardinals would now open the season by hosting Wyoming on Sept. 26. Ball State still has eight league games on the schedule, too.

Five more baseball players tested positive for COVID-19 in the past week, raising the total to 80 since testing started in late June.

Major League Baseball and the players’ association said six of 10,548 samples were new positives in the week ending Thursday, a rate of 0.05%. In addition to players, one staff member tested positive.

The week included a five-day span with no new positive tests. Including the initial intake screening that started in late June, 93 of of 21,701 samples have resulted in new positives, a rate of 0.4%. The positives included 80 players and 13 staff members.

Formula One says two people tested positive for the coronavirus in the latest batch of tests carried out before the Hungarian Grand Prix.

No further information was given about the two people who tested positive. They have been removed from the Hungaroring vicinity and isolated.

F1 reported no positive cases from more than 8,000 tests carried out over the previous two races held in Austria at the Red Bull Ring in Spielberg.

Personnel attending the races are tested every five days with results made public every seven days.

There are two scheduled races at the British GP on Aug. 2 and Aug. 9.

The world triathlon championships will be staged this year but it’s unclear where and when.

The worlds were originally scheduled to take place in August at the Edmonton world series grand final but they were canceled in April because of the coronavirus pandemic. The governing body of the sport now says a 2020 worlds can go ahead after recommendations from athletes and coaches and talks with national federations.

World Triathlon says it was forced to scrap two World Cups and three Asian Cups in China scheduled for September and October after the country’s government last week canceled all international sports for the rest of the year.

The conference announced it will try to play those sports in the spring semester, and has agreed to a “look-in” window during September to evaluate whether it is possible to conduct shortened, conference-only seasons in fall sports.

The restart of the Paraguayan soccer league has been called off after three teams came down with cases of the coronavirus.

The soccer association did not say how many players or club staff members have become infected.

The league had been scheduled to resume later in the day after a four-month suspension caused by the pandemic. San Lorenzo was to play General Diaz.

Guarani was scheduled to play Guaireña on Saturday and 12 de Octubre was to play Sol de America.

Club executives are expected to meet later in the day to discuss whether other matches will go forward.

Paraguay has done comparatively well in combating the virus. Only 27 people in the country of almost 7 million residents have died with the virus of about 3,300 infected.

Sporting events in England could be opened up to spectators starting in October.

No fans have been allowed at stadiums since sports resumed in the country in June after a three-month shutdown caused by the coronavirus pandemic.

British Prime Minister Boris Johnson says “from October we intend to bring back audiences in stadia ... in a COVID-secure way subject to the successful outcome of pilots.”