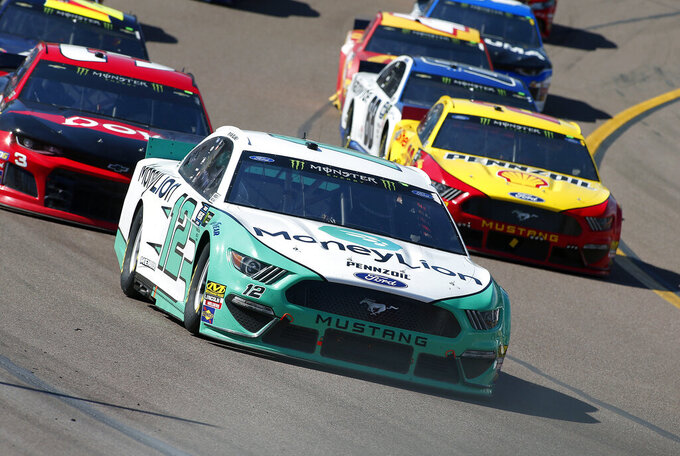 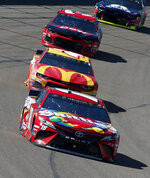 AVONDALE, Ariz. (AP) — Kyle Busch made it a weekend sweep at ISM Raceway in the Arizona desert.

Just like he nearly did last week at Las Vegas.

Busch tracked down Ryan Blaney over a long green-flag run before passing his Team Penske rival for the lead with 16 laps to go, then made his fuel and tires last to the checkered flag to add a victory in the NASCAR Cup Series on Sunday to his triumph in the Xfinity Series race.

"We were going to be right on the verge," Busch said. "You have to go hard first and worry about fuel afterwards. After I got Blaney, I was able to save a little bit and take care of my tires for the rest of the lapped traffic I had to get through."

Busch's latest big weekend gives him 199 wins in NASCAR's top three series, including 52 at the Cup level. He will go for the 200 milestone next weekend at Auto Club Speedway in California.

"It's not for me to worry about. It's for everybody else to discuss and talk about and debate over," he said of its importance. "But for myself and the view I've had, I've been fortunate to be around a lot of great people and a lot of great sponsors."

Busch also won the Xfinity race last weekend at Las Vegas, and he would have hit the 200-mark on Sunday if not for a speeding penalty in the Cup Series race that left him with a third-place finish.

Even after victory outside Phoenix, Busch was still ruing what might have been.

"This makes last weekend feel so much stupider," he said. "I wish we would have swept last weekend, too, with two weekend sweeps in a row. But we'll take what we got today."

Martin Truex Jr. also got around Blaney to finish second, taking advantage of a No. 19 car that kept getting better on longer runs. Blaney wound up third after starting on the pole, and after having to make two stops during the final caution because of a lugnut that would have come loose.

Still, it was a momentum building result for Blaney, who had watched Team Penske teammates Joey Logano and Brad Keselowski reach victory lane the past two weeks. Blaney had been outside the top 20 in each of his first three races this season.

"It definitely was a good weekend after the start of the year we had," Blaney said. "A good day, the day we needed. We've been poised to have days like this and contend for wins and it just hasn't happened this year. This is what we deserve."

Aric Almirola was fourth and Denny Hamlin was fifth, his car also performing better on long green-flag runs. Kyle Larsen drove to sixth from the back of the field after failing to get his money lap in during qualifying before time expired, while Kurt Busch and Jimmie Johnson also had strong runs.

"If you can't win, it's just about maximizing your day," Almirola said, "and we were really close on fuel. I didn't want to run out and finish 20th. I wanted to salvage a top-5 out of the day."

The way Busch has been going lately, it seems as if nobody else can win.

"I'm always leery about all-time when you talk in pro sports," team owner Joe Gibbs said, "because there's been so many great ones. ... Kyle has the determination and drive that is very unusual."

Blaney has won the first stage by regaining the lead when Brad Keselowski brought out a caution, and Busch took the second stage under caution following Alex Bowman's tire problem.

Kevin Harvick had won four of the past five spring races at ISM Raceway, and his nine total Cup Series wins at the mile-long speedway are a record. But he never seemed to have much speed in his No. 4 Ford this weekend, spending most of the race hanging around the top 10. He finished ninth.

Chase Elliott's long, difficult day began when he started on the outside of the front row and the green flag dropped. He was a nose ahead of Blaney at the line and was given a pass-through penalty, and he spent the rest of the first segment working his way back through the field.

In the final segment, Elliott reported a vibration before spinning on the next lap, bringing out a caution. He did manage to keep his No. 9 Chevrolet off the fall and wound up 14th.

Michael McDowell's weekend began with a qualifying scuffle with Daniel Suarez, and it ended early in the final stage when teammate David Ragan knocked him from behind and he ended up in the wall.

"As I got on the back straightaway the throttle pedal was gone. I was just wide open," McDowell said. "I tried to jam on the brakes as hard as I could. ... I was just trying to do everything I could to get it shut off, and yeah, really unfortunate for us today."

The series heads to Fontana, where Truex is the defending race winner.