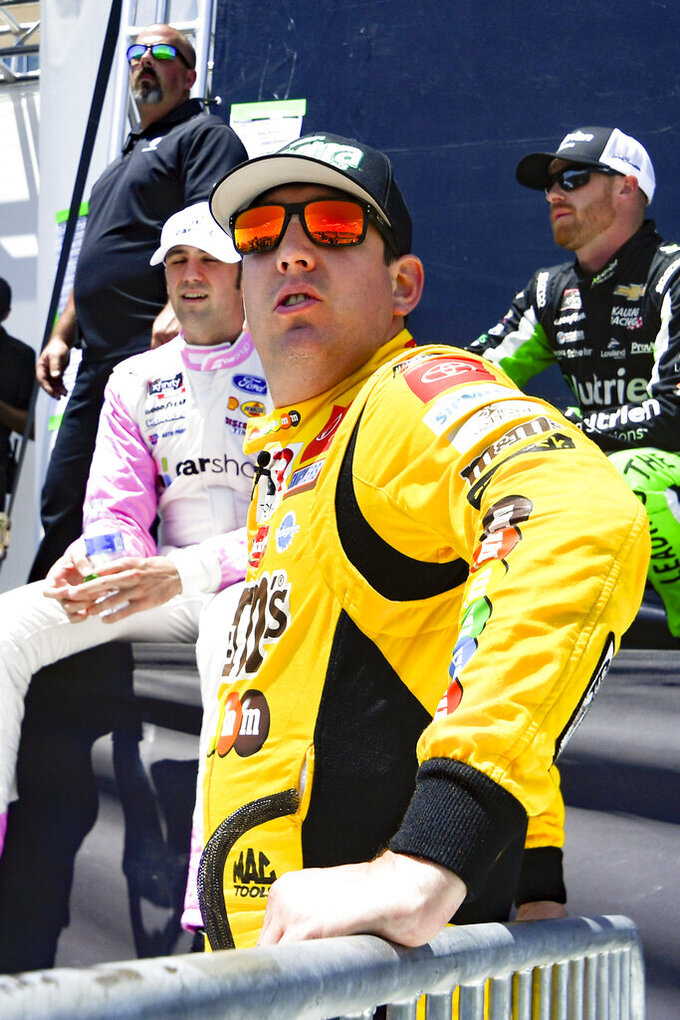 Busch completed a 5-for-5 sweep of what he says will be his final season in the Xfinity Series with a late recovery at Atlanta Motor Speedway on Saturday.

Busch knocked teammate Daniel Hemric from the lead with a late push. That cast a pall on what otherwise would have been an ideal way for Busch to say goodbye to NASCAR's second-tier series.

“It’s not quite the win we were hoping for,” Busch said. “A little bit of a somber win I guess, not just for it being the last one but for the way it kind of happened.”

Busch finished 0.550 seconds ahead of Jeb Burton for his 102nd Xfinity victory and 222nd overall in NASCAR’s three national series.

Busch took the lead after pushing Hemric on a restart with six laps remaining. Busch appeared to be trying to give Hemric, his Joe Gibbs Racing teammate, a helpful push on the restart. Instead, Hemric lost control and hit the wall.

“I just wanted to hit him forward and straight but turned him sideways a little bit,” Busch said.

Busch said he plans for this to be his final Xfinity race, though he left room to change his mind.

“Yeah, this is it,” Busch said. “You never say never, but this was the last one, the last scheduled one. We’ll hang it up and do something else on Saturdays.”

One week after Hemric had a runner-up finish to Busch, he was on the verge of his first career win before spinning on a restart when pushed by Busch with six laps remaining.

Busch said some will say he wrecked his teammate to clear the way for his sweep-clinching victory.

“People would say I did it on purpose, but why would I need to do it on purpose?” he said. “Kid going for his first win. I’m going for 102. I’ve been there, done that. I don’t need it. It would certainly help him a hell of a lot more than it’s going to help me and give the perception that now I have on that.”

Hemric took the lead on the final stage after Busch won the first two stages.

“Unfortunately, that was the position we were in last time we were here and came with a new setup and tried to make things work today and we found ourselves in about the same position or maybe worse,” Cindric said.

Austin Dillon finished 11th as a late fill-in for Michael Annett, who was unable to drive the No. 1 Chevrolet due to a nagging leg injury. Dillon started at the back of the field.

One of Dillon’s first radio communications was a question asking for the name of his spotter and crew chief.

NASCAR only allows Cup Series drivers, including Busch, to compete in five Xfinity and five Truck Series races each year. Atlanta was Busch’s fifth and final Xfinity event — and fifth win — of 2021.

Busch said the scattered turnout by fans shows NASCAR shouldn't be keeping the big names away from the second-tier series.

“I know it's Atlanta, I know it’s 86 degrees out there but those grandstands didn’t look too good today,” he said. “... Names sell and if you ain’t got names you ain't selling.”

Busch will start second, behind Chase Elliott, in Sunday’s NASCAR Cup Series event, the final race before the Atlanta Motor Speedway track is repaved and remodeled.

Heat forced C.J. McLaughlin to leave his 66 Toyota about halfway through the final stage. He was treated and released from the infield care center.