Jim France leading change at NASCAR from the shadows 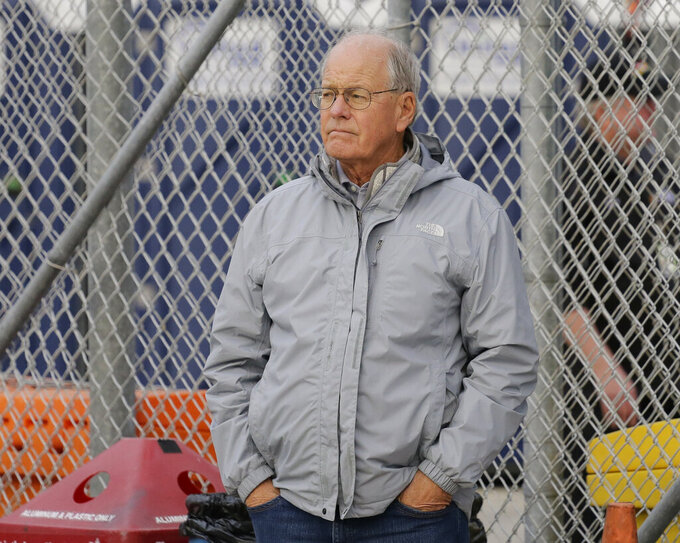 In this Saturday, Feb. 9, 2019, photo, Jim France, executive vice president of NASCAR, stands on pit road as he watches auto racing at Daytona International Speedway, in Daytona Beach, Fla. France replaced his nephew as head of NASCAR in August and has remained behind the scenes as he tries to stabilize the family business. (AP Photo/Terry Renna)

DAYTONA BEACH, Fla. (AP) — Jim France is running NASCAR the same way he lives his life — quietly, in the background, away from the spotlight he never craved.

The youngest son of NASCAR's founder carved his own path in the family business and left the leadership roles to his father, Bill France Sr., and then to his older brother. Jim France ran sports cars, served on NASCAR's boards and was content when nephew Brian France replaced Bill France Jr. as chairman of NASCAR in 2003.

Brian France made radical changes to the playoff system, approved a new car and stage racing, pulled NASCAR out of some of its traditional markets for big city exposure and, along the way, managed to alienate a chunk of the series' aging fan base. He showed little interest in calls for a condensed season, shorter events, weekday races and a greater variety of tracks even as NASCAR spent much of the last decade unable to stop a slide in attendance and television ratings or an exodus of top sponsors.

Then Brian France was arrested last August in New York, hundreds of miles from Chase Elliott's first Cup Series victory that same day, on charges of aggravated driving while intoxicated and criminal possession of a controlled substance. He immediately took a leave of absence and uncle Jim France stepped in as interim chairman and CEO.

Jim France has been at almost every NASCAR race since, available for drivers and teams and walking pit road, sometimes summoning officials to look things over. The "interim" label has been dropped from his title and it is clear Jim France is at long last running the show.

"I think Jim is doing a good job, just in being around," said 2015 champion Kyle Busch. "He's always got a pen and a notebook, he's in the trenches, he's asking questions and he's listening."

Still, he has offered no public insight as to how he plans to end NASCAR's slump and has given no interviews during his six months at the helm.

France was highly visible last month during the Rolex 24 at Daytona sports car race. He was late to a news conference scheduled to promote IMSA's 50th anniversary season and took three pre-screened questions after a moderator warned he would not discuss NASCAR.

There was a brief moment in his remarks, while discussing Ben Kennedy's emergence in the family business, when Jim France seemed to be talking in broader terms.

"This is what we do, and we've got the next generation coming," he said. "We plan to keep it a family."

This comes a year after reports suggested the France family was looking to sell NASCAR, reports that have not been specifically addressed by the current leadership, including Lesa France Kennedy, an executive vice president and the CEO of International Speedway Corp.

NASCAR late last year began acquiring the remaining public stock in ISC, which owns a majority of the NASCAR-sanctioned tracks. Layoffs began after the start of the year and many longtime employees, some who had started with the company under Bill France Jr., were let go.

NASCAR could, at minimum, be seeking investors. The silence has only fueled speculation.

"I think what Jim has probably done is he's sat back for a long, long time," said three-time NASCAR champion and current Fox Sports analyst Darrell Waltrip. "When he was put in the position that he's in, he knew that there needed to be sweeping changes. When the rumor went around that NASCAR could be for sale, there were probably a lot of questions about, 'Well, what am I buying?'

"I think what Jim is trying to do is trying to get everything under one umbrella where you can quantify, 'Am I buying the sanctioning body? Am I buying racetrack real estate? (Race) dates? What am I getting if I was to buy NASCAR?'"

The Daytona 500 on Sunday opens the new season and a new rules package will be introduced a week later at Atlanta Motor Speedway. The package is designed to slow the cars, keep them closer together and improve the competitiveness on the track.

There is a new car in development, NASCAR is actively courting additional manufacturers and series officials are taking a hard stance with drivers and teams to play by the rules. If a winning car fails post-race inspection it will now be disqualified and stripped of the victory. NASCAR also plans to fine drivers who skip their commitments to talk with reporters, another big change after years of drivers using the motorhome lot as a refuge.

NASCAR at last also seems open to altering its 38-race schedule that stretches nearly 11 months, adding more short tracks and road courses for fans who have begged for a fix to the stale climate.

It took Jim France taking over and then promoting Steve Phelps to president of NASCAR to get most of the initiatives rolling.

"Jim France wanted change and we will support him," said Hall of Fame team owner Roger Penske. "Phelps coming in, and he and Jim are making changes, they have looked at their overheads. I think they understand that the costs continue to escalate and we've got to turn it around and spend money that's rational.