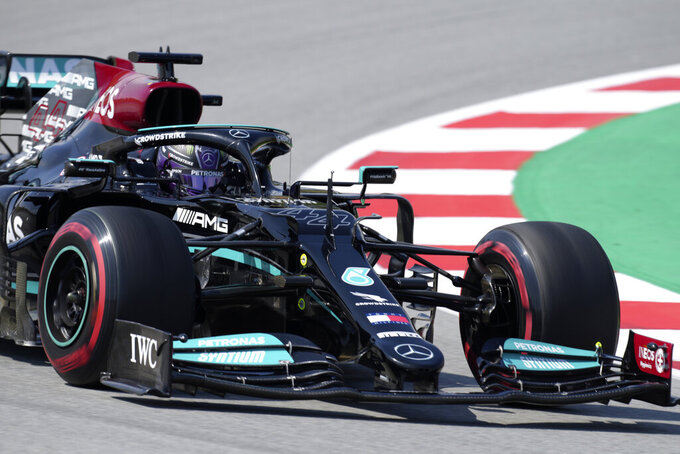 Mercedes driver Lewis Hamilton of Britain takes a curve during the second free practice for the Spanish Formula One Grand Prix at the Barcelona Catalunya racetrack in Montmelo, just outside Barcelona, Spain, Friday, May 7, 2021. The Spanish Grand Prix will be held on Sunday. (AP Photo/Emilio Morenatti)

MONTMELÓ, Spain (AP) — Lewis Hamilton did what he does best on Friday, and Max Verstappen didn’t.

Hamilton clocked the fastest time in the second practice session for the Spanish Grand Prix, while Verstappen finished a distant ninth.

Hamilton, who leads Verstappen by eight points in the Formula One standings, set the best time in the second session with a lap of 1 minute, 18.170 seconds. Mercedes teammate Valtteri Bottas was .139 seconds behind in second after the Finn had set the fastest time in the first practice session.

“It’s been a good start to the weekend, the track is awesome and our balance is similar to what we had in the last race,” Hamilton said. “It looks close, but I think we’ve got good pace.”

Verstappen was .615 off the pace. The Red Bull driver missed some time on the track while his team worked on the car, and his last lap was cut short when he damaged the right tip of his front wing.

“How competitive we are going to be tomorrow is always going to be a question mark on a Friday, but from our side we are quite happy,” Verstappen said. “Of course, you always want to improve and do better, so we just have to make sure tomorrow that we are up there. But I’m looking forward to it.”

Ferrari driver Charles Leclerc had the third-best time, followed by Alpine pair Esteban Ocon and Fernando Alonso, who is back in Spain for his first race since 2018.

Hamilton looks to have the edge for Sunday’s race, too. No driver dominates the curves and straight away of the 4.6-kilometer (2.9-mile) Barcelona-Catalunya Circuit like the British driver, who has won the race for the past four years.

On Saturday, Hamilton will be aiming for his 100th career pole. On Sunday, he will be looking to equal Michael Schumacher’s six wins in Montmeló.

Verstappen, however, is the last driver to win other than Hamilton to win on this track. He became F1’s youngest race winner at the age of 18 when he won the Spanish GP in 2016.

This season, Verstappen could have been even closer — or perhaps ahead of Hamilton — in the standings if he had not run afoul of track limit violations that cost him points in Bahrain and Portugal.

Red Bull’s other driver, Sergio Pérez, finished behind Verstappen with the 10th best time on Friday.

McLaren driver Lando Norris, the surprise of the season in a distant third place, had the 12th best time behind Sebastian Vettel in his Aston Martin.

“It’s amazing to see the progress that McLaren, Ferrari and Alpine are making, not just Red Bull, and that puts pressure on us,” Hamilton said.

The two sessions under sunny skies near Barcelona only saw one red flag when Alfa Romeo reserve driver Robert Kubica spun out on a curve and got stuck in the gravel.

“I paid quite high a price for what I’d say is a small mistake,” Kubica said after his first spin in a F1 car in five months.