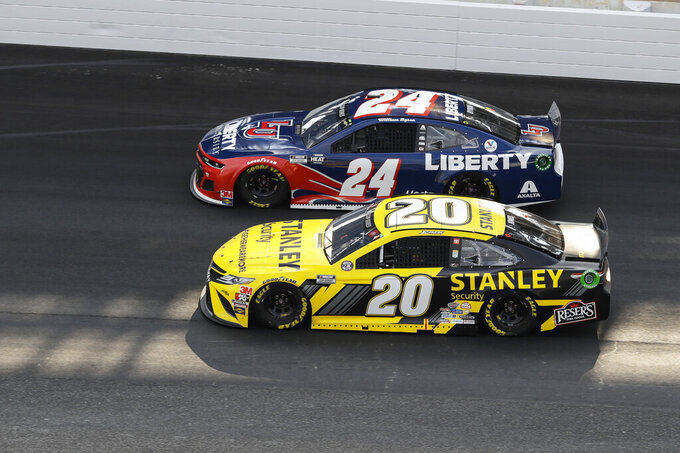 “We appreciate all Erik has done for Joe Gibbs Racing over the past several years,” Joe Gibbs said Thursday night. “He joined us as a teenager and has accomplished so much in his time here and we remain focused on the remainder of this season and earning him a spot in the playoffs.”

The 24-year-old was discovered by reigning Cup Series champion Kyle Busch when Jones beat Busch in the Snowball Derby late model race in 2012. Jones was 16 at the time and the victory opened the door for Jones' rapid rise into NASCAR's national series.

The Furniture Row agreement didn't work, though, and Jones moved into the Gibbs camp as one of its four drivers in 2018. Through 131 Cup starts over five seasons, Jones has two victories, both in the No. 20 Toyota for Gibbs.

He goes to his home track of Michigan International Speedway this weekend ranked 18th in the Cup standings and trying to work his way into playoff contention. Jones is also in a contract year but Gibbs has long has a backlog of young drivers and will likely replace Jones in 2021 with Christopher Bell.

Bell, also in the Gibbs pipeline, drives this year for Leavine Family Racing in another Gibbs alliance. But that team said Wednesday it is closing at the end of this season.

Jones won the Southern 500 for Gibbs in 2019 to earn a spot in the playoffs. He opened this season with a victory in the exhibition Busch Clash at Daytona International Speedway.

“I greatly appreciate the opportunity that JGR provided me with over the last four years and I wish the team nothing but success and good fortune,” said Jones. “JGR gave me a solid foundation from which to go out and compete at the highest level and I look forward to building on that in the years to come.”