COVID concerns have Cup drivers worried ahead of playoffs 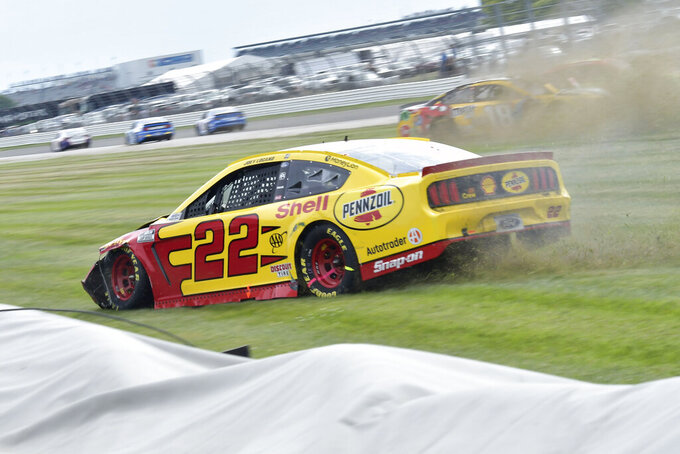 Joey Logano (22) goes through the grass toward a tire wall after crashing on a piece of curbing during a NASCAR Series auto race at Indianapolis Motor Speedway, Sunday, Aug. 15, 2021, in Indianapolis. (Randy Crist/The Indianapolis Star via AP)

BROOKLYN, Mich. (AP) — Joey Logano was taking every possible precaution to keep COVID-19 from eliminating him from NASCAR’s impending playoffs.

He said he watches where he goes and who he’s with and this week canceled three public appearances. He also went a step further and got vaccinated.

Corey LaJoie became an example of what can happen to unvaccinated NASCAR drivers: He missed Sunday’s race at Michigan because the rules state that competitors who haven't gotten jabbed but are exposed to someone who tested positive for COVID-19 must quarantine for seven days.

The playoffs begin in two weeks and if a title-contending driver is simply exposed to a person with the coronavirus, that will end his championship chances.

The vaccine is suddenly a topic in NASCAR, though many drivers don’t want to discuss it.

“That’s like me asking you if you’ve had a vasectomy,” said Aric Almirola, one of 14 drivers who already has clinched a playoff spot.

Two spots remain open and regardless of whether they’ve qualified, most of the top 20 drivers opted not to discuss their vaccination status Sunday.

William Byron was an exception. He confirmed he got jabbed earlier this year in part because he wanted to prevent putting his mother, Dana, at risk while she is treated for a brain tumor. Besides, Byron said, most hospitals require visitors to be vaccinated or quarantined.

But Logano, the 2018 Cup champ, made the most compelling case in favor of vaccination.

“There’s one thing I learned when we won (the championship): it affects so many people’s lives with bonuses and other stuff,” he said. “So if I get COVID and miss the race, then I’m taking away food from other people’s families.”

Missing any of the 10 playoff races could knock a driver out of title contention.

NASCAR does not have a vaccine mandate for its competitors. It used stringent protocols and a “bubble” to become one of the first major sports league to resume competition just three months into the pandemic, and the first to complete its 2020 season last November.

Series officials started loosening those restrictions this season and fully reopened garages to guests in late May.

The IndyCar Series still required anyone entering Gasoline Alley during May’s Indianapolis 500 to be fully vaccinated or tested daily. The result: There’s a 90% vaccination rate throughout the entire paddock.

NASCAR began retightening its rules this week as the number of virus cases has surged due to the highly contagious delta variant. Reporters were required to wear masks, inside or outside, when interviewing drivers and the series’ trademark hauler limited inside occupancy to only four people because of social distancing rules.

Some teams also have jumped on board by limiting contact in their suites.

Rather than issue a vaccination mandate, though, NASCAR adopted a different set of rules for those who are innoculated and those who are not.

Proponents of the rules are hard to find.

“I look at all of that stuff as very personal, very choice-driven and nobody needs to know what people’s choices are,” two-time Cup champ Kyle Busch said. “But now everybody’s asking for vaccination status cards and everything and where you go, so I guess HIPAA doesn’t exist any more,” he said, referring to the federal law restricting release of medical information.

While LaJoie did not test positive, he explained on Sirius XM NASCAR radio that a person inside the studio where he tapes a weekly his weekly podcast did.

That was enough to force LaJoie out of this race and ignite the debate.

Most drivers said Sunday they believed a negative test should be good enough for NASCAR to greenlight a competitor. Austin Dillon noted there are many ways to isolate drivers from teams in racing, including the use of a helmet.

Still, not everyone is concerned. Kyle Larson, a five-time Cup race winner this season and the points leader, said he hasn’t changed anything yet.

“I’m here doing media availability, so all is normal,” he said before trying to win Sunday's race, his fourth of the week.

But in a sport where caution can be costly, Logano believes there’s only one option for the playoffs when it comes to COVID-19: playing it safe. That’s why he got vaccinated.

“I think it pushes you whether you want to or not,” he said, noting how severe the consequences could be if he’s merely around someone who tests positive. “If that happens two weeks from now, your whole season is gone.”