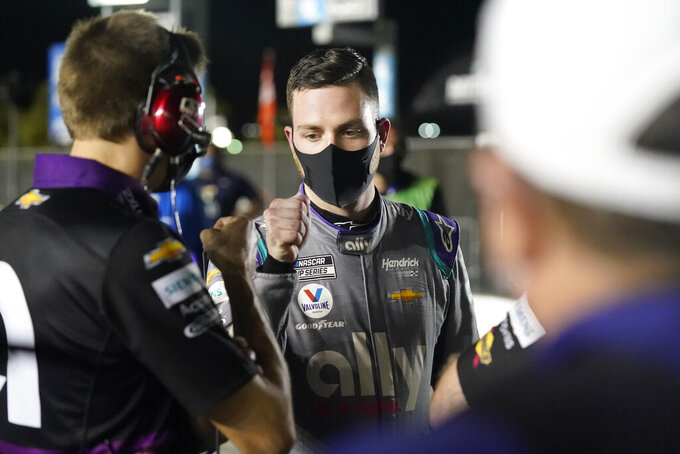 Alex Bowman, right, gets a fist bump from one of his crew members after winning the pole position for the NASCAR Daytona 500 auto race during qualifying at Daytona International Speedway, Wednesday, Feb. 10, 2021, in Daytona Beach, Fla. (AP Photo/John Raoux) 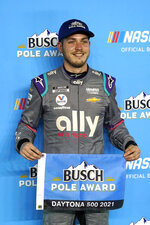 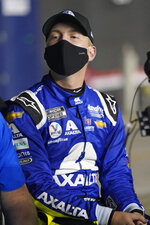 “I think it means a lot to Mr. H — he wants to win everything, like every category, he wants to be top of the list,” Bowman said. “Here it really just comes down to who built the fastest race car. And I think it’s important for Hendrick Motorsports to come up and prove that they’re the ones that did that.”

Bowman posted a lap at 191.261 mph to earn the top starting spot for the second time in his career. It’s the fourth consecutive year Bowman will start from the front row, but he's got a completely new look this time.

Bowman in the offseason was moved from the No. 88 into the No. 48 vacated by seven-time NASCAR champion Jimmie Johnson. He inherited sponsor Ally, which has committed to backing Bowman and helping him develop his brand.

“It's really hard to sit here and be like, ‘I did it and I did this and that and that’s why we are on the front row for four consecutive years,'” Bowman said. “It's more about the people that make it happen. I floored it, but I'm pretty sure everybody else did, too. I'm just appreciative to have a fast car.”

Greg Ives, Bowman's crew chief, has put one of his cars on the front row for five consecutive years dating to Dale Earnhardt Jr. in 2017. Ives has never had a car start lower than third since he became a Cup crew chief in 2015.

“We put a lot of time and effort into our speedway program. It’s a show car. It’s the pinnacle of the hotrods that we bring out of our race shop,” Ives said. “There’s a lot of pride in every piece, every car, just from the paint job all the way down to the last nut and bolt.”

Bowman drove his Chevrolet more than 1 mph faster than teammate Byron, who qualified second with a lap at 190.219 mph. Only the front row was set Wednesday, the first time Daytona 500 qualifying has been held at night under a condensed Speedweeks schedule.

“Hendrick always gives us great cars to come down here and qualify well and also race well, so you never know which guys are going to have the speed out of the four of us,” Byron said of the four-car Hendrick stable. Chase Elliott was 11th and Kyle Larson 15th to complete Hendrick's lineup.

It's the ninth consecutive year Chevrolet won the pole.

The 40-car field is determined through both time trials and a pair of Thursday night qualifying races. NASCAR sold 36 charters that guarantee those owners slots in the field, which leaves eight drivers vying for four “open” spots in the Super Bowl of stock-car racing.

Two spots were earmarked to the fastest “open” cars in time trials. David Ragan and Ryan Preece earned those berths.

Preece had a charter last year with JTG-Daugherty Racing, but the team no longer holds its rights and there’s concern the car won’t attempt to make every race if it doesn’t have early success.

Preece said he wasn't nervous before attempting his lap, but did panic when the qualifying session was delayed for a power issue and Preece noticed he was wearing the wrong firesuit. Preece said he ran half-a-mile before his qualifying lap to change his suit.

Derrike Cope, the 1990 Daytona 500 winner and oldest driver in the field at 62, could not get his car started and did not make a qualifying lap. His car is locked into the race, though, because it has a charter.

The No. 62 driven by Noah Gragson for Beard Motorsport failed pre-qualifying inspection three times, did not get to attempt a qualifying lap, and lost a crew member.

Beard has to forfeit a team member as penalty, but Gragson can race Thursday night and attempt to qualify for his first Daytona 500.

Bubba Wallace, fastest in Wednesday' afternoon's practice, briefly sat on the pole in his new 23XI Racing entry owned by Michael Jordan and Denny Hamlin. Byron bumped him first, then Bowman topped Byron. Wallace wound up fourth on his first day in his new car.

“I’m pumped and I know that all the resources are there. Everything is in place,” Wallace said. “My motto is, ‘No more excuses.’”

Hamlin, who is trying to become the first driver to win three consecutive Daytona 500s, was 12th. He said it was emotional to see the team he helped build get its car on track.

“I’ve always said for a long time, for the last couple months, when I see the car on the track, that’s kind of when it will be real for me, and it definitely was,” Hamlin said.