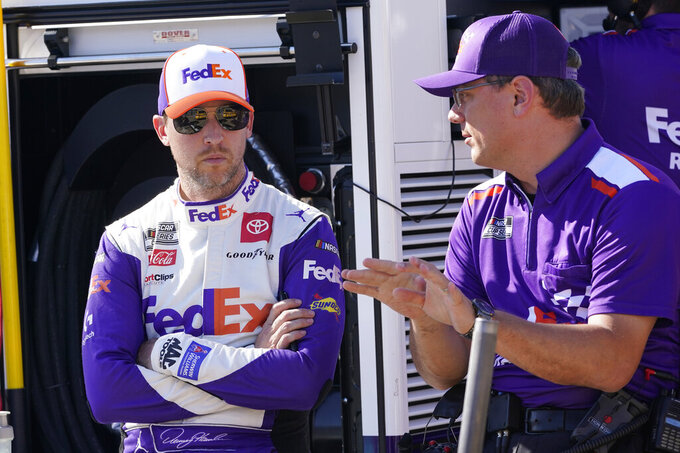 RICHMOND, Va. (AP) — Ryan Blaney and Martin Truex Jr. are the favorites as they battle for position to make NASCAR's playoffs, but in a season when there have already been 15 race winners, they are far from the lone contenders.

Blaney is second in points, just 19 points ahead of fourth-place Truex, but neither has won a race — the virtual automatic ticket to a spot in the postseason. Three races remain before the 16-driver field is set, starting with Sunday afternoon at Richmond Raceway. Two more unique winners could leave a race winner out of the field for the first time under the playoff format.

Other non-winners include 2012 series champion Brad Keselowski, Bubba Wallace, last weekend’s runner-up at Michigan, and 14th-place Erik Jones. After Richmond, the series moves to the road course at Watkins Glen and finishes the regular season at the superspeedway that is Daytona.

Truex appears to have an edge on Richmond's 0.75-mile oval, having won three of the last six races here, but Blaney led 128 laps in the spring and has two consecutive top-10 finishes on the D-shaped layout.

Truex doesn't plan to change anything in his approach.

“We go race the best we know how. And, you know, hopefully you put ourselves in a position to win and do all the right things,” he said. “It’d be disappointing with the season we’ve had to not make it.”

Blaney also declined to lament the fairness of the playoff format and said he hopes to continue the improvements he's made in his last two races here.

“I was proud of the progress we made here in the spring, the progress we continue to make at this racetrack, and I think we’ve built on it even more. Hopefully it shows, you know, in the race.”

Truex and Blaney both reached the second round of qualifying Saturday, but Kyle Larson won the pole with a lap at 117.177 mph. Truex will start sixth, Blaney 10th.

The race winner most in danger of being bumped is Kurt Busch, who will miss his fourth consecutive race because of a concussion sustained in qualifying at Pocono on July 23. Busch has dropped from 14th to 20th while sidelined.

The 15 winners include five first-timers, and Kevin Harvick said the win-and-you're-in idea makes it exciting for race winners, but the notion that Blaney or Truex could be knocked out of the playoffs while near the top of the point standings is problematic.

“I think there has to be more weight put on all 26 weeks and the things that you do from a fairness to a team standpoint,” he said,

Kyle Busch still doesn't have a contract with Joe Gibbs Racing for next season, but the two-time series champion says while his immediate future is up in the air, he's got a much better handle on his long-term plans.

“I would like it to not have to go through this again,” Busch said of contract negotiations. “I’ve got six, seven, maybe eight more years. If I play all this out perfectly, (son) Brexton and I will share a truck when he turns 16 years old, when he’s 16 and 17. And then it’s his when he’s 18 and I’m done, I’m out.”

Truex (2017) and possibly Kurt Busch (2004) aren't the only former champions who could miss the playoffs.

Keselowski has struggled since leaving Team Penske after last season to take an ownership role with Jack Roush and RFK Racing. He's 28th in points with just three top-10 finishes. His standing includes a 100-point penalty he incurred in March for modifying a single-source part on the Next Gen car.

There were 16 different winners last season, but only 14 before the playoffs began. Denny Hamlin and Bubba Wallace both notched victories during the postseason. ... Larson won 10 times, and the championship, last season. He's won just once this year. ... Kyle Busch leads active drivers with six Richmond victories. Denny Hamlin has four, Harvick and Truex three each and Keselowski, Joey Logano and Kurt Busch each have two.