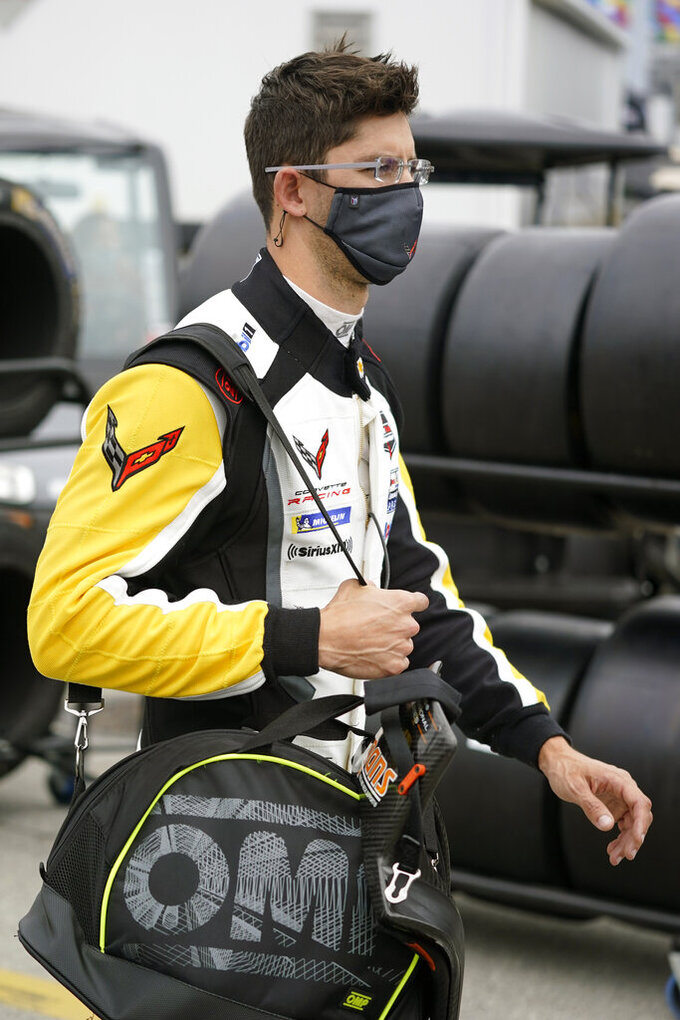 Jordan Taylor walks back to his garage after a practice session for the Rolex 24 hour auto race at Daytona International Speedway, Saturday, Jan. 23, 2021, in Daytona Beach, Fla. (AP Photo/John Raoux)

Antonio Garcia tested positive Sunday for COVID-19 during the Rolex 24 at Daytona and was pulled from the winning Corvette Racing team with seven hours remaining in the twice-round-the-clock endurance race.

General Motors waited until the race concluded at Daytona International Speedway to announce the Spaniard had tested positive. GM did not say when Garcia was tested, only that he did so to be cleared to return to Spain after the race as part of IMSA's protocols for international participants.

Garcia said in a statement he had COVID in late December with symptoms, but isolated and cleared both Spanish and CDC protocols to travel to the United States.

He was tested before he arrived at Daytona more than a week ago to begin preparations for the race. Garcia spent nearly eight hours driving in the 24-hour race and was last in the car Sunday morning. He had a brief media availability Sunday morning, presumably before he learned he'd tested positive.

GM said Garcia did not have symptoms Sunday but the driver had to leave the track as part of IMSA protocols. IMSA allowed the team to continue the race with Jordan Taylor and Nicky Catsburg and the two closed out the GT Le Mans class victory and a 1-2 finish for Corvette.

“This is both one of the best days of my career but also one of the most frustrating and disappointing," Garcia said in a statement distributed by Corvette Racing. "It’s painful not to be able to celebrate with Jordan, Nicky and the rest of the team. We worked so hard over the past months and weeks to achieve an endurance win like the Rolex 24.”

Garcia, who is 40, has three class wins in the 24 Hours of Le Mans and is a longtime Corvette factory driver. The Rolex win Sunday was the third of his career, and he and Taylor are the reigning GT Le Mans class champions.

“It was bittersweet to end the day like we did with Antonio having to leave the track," Taylor said. “I was super upset and disappointed for him when I got out of the car after what I thought was my last stint and was told he couldn’t get back in the car. He lives for these events, especially this one.”

IMSA is owned by NASCAR, which does not conduct COVID-19 tests for its participants but operates in a bubble of sorts at the race track. International drivers were given access to a testing service to assist in their travel to and from the event and Garcia was cleared to travel to Daytona and participate in two full weekends on track.

Catsburg said he tested negative Saturday but will be tested again before he returns to Europe.

“I feel safe and I never felt under any threat from his positive results,” said Catsburg.

Garcia was the second driver to test positive for COVID-19 during the Rolex weekend. Alegra Motorsports pulled Michael de Quesada from its entry Saturday morning before the race.

Mathieu Jaminet was replaced by RWR Eurasia last week when he tested positive, and Black Swan Racing withdrew when owner/driver Tim Pappas tested positive. Both Jaminet and Pappas presumed they had been exposed at the 24 Hours of Dubai before traveling to Daytona two weeks ago.

Renger van der Zande had to quarantine during Chip Ganassi Racing's test session in Sebring, Florida, earlier this month due to contact tracing.

Taylor said there was almost no interaction between drivers beyond passing the car off between them during the race.

“The protocols we have are super serious, the drivers don't really get to interact even in a 24-hour," Taylor said. "Antonio, I saw him before the race and that was the last time, and even then, we're always social distancing, we're always taking the correct protocols.

Wayne Taylor Racing won the overall Rolex 24 title with a lineup that included Ricky Taylor, but Jordan Taylor said Garcia's positive test would spoil the family celebration with his father and older brother.

“I'm fine to go sit in my house by myself for as long as it takes and just caress my Rolex for a while," said the Florida native.

The Rolex 24 is the opening event of the North American motorsports season and NASCAR and IMSA held it with limited spectators at Daytona. It was a test run for the Daytona 500, which opens NASCAR's season Feb. 14.