Yuki Tsunoda back home for Japanese Grand Prix at Suzuka 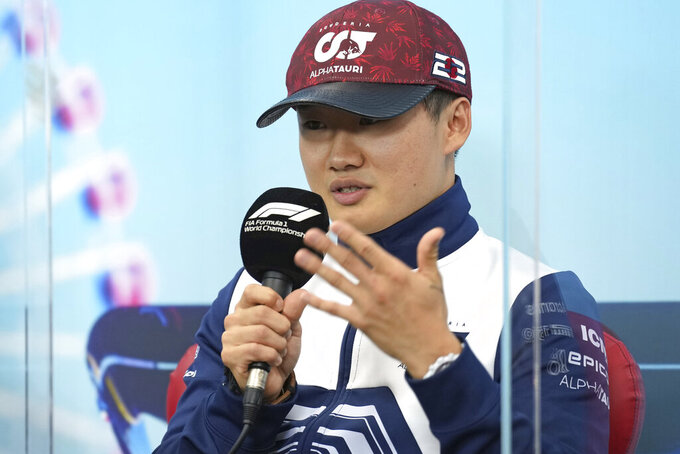 AlphaTauri driver Yuki Tsunoda of Japan speaks during a news conference, ahead of the Japanese Formula One Grand Prix at the Suzuka Circuit in Suzuka, central Japan, Thursday, Oct. 6, 2022. (AP Photo/Eugene Hoshiko)

SUZUKA, Japan (AP) — There's no place like home for Yuki Tsunoda, Japan's only Formula One driver who will be an overwhelming fan favorite in Sunday's Japanese Grand Prix.

Tsunoda will be wearing a special helmet designed by a fan, he's all over social media because of a karaoke session in Japan with AlphaTauri teammate Pierre Gasly, and he has even taught defending Formula One champion Max Verstappen a few words of Japanese.

“Yuki is a faster driver than I am,” Verstappen says in Japanese in a funny Twitter post. It’s unclear if the Red Bull driver— who can clinch his second straight season title on Sunday — knew what he was saying.

Images of Tsunoda's face are also up on posters all around the track area.

“It's definitely cool,” Tsunoda said Thursday “Currently, I don't feel like it's pressure. It really makes me feel supported and gives me extra energy.”

Tsunoda isn't yet in Verstappen's class, but he's a rising talent and one of only two Asian drivers in F1 along with China's Zhou Guanyu. Tsunoda has earned 11 points this season — all in the first six races. Zhou has six points with Alfa Romeo,

Verstappen has 341 points, 104 ahead of Charles Leclerc of Ferrari, and 106 clear of his Red Bull teammate Sergio Perez. Five races remain in the season, including the Japanese GP.

“I think, realistically that Max is going to be a champion — if not this weekend it's going to be very, very soon,” Leclerc said.

Tsunoda should have an advantage at Suzuka. He learned racing there as a graduate of the so-called Suzuka Racing School, and said he's driven on the track in central Japan since 2016.

He also acknowledged that those laps came in cars that were 40 seconds per lap slower than an F1 car.

Tsunoda described the cancellation of the Japanese GP last season, due to COVID-19, a low-point in his career. “I was quite devastated,” he said.

What a difference a year makes.

“Of course, it was my dream to become an F1 driver, but to be able to drive in front of the loud cheers of so many Japanese fans is a dream come true for me,” Tsunoda said.

“Four years ago I was watching the race from the second turn as a spectator at Suzuka,” he added. “I never thought that I would be able to participate four years later in a F1 race at Suzuka.”

Zhou — to match Tsunoda — may get a chance to perform at home next year. The Chinese Grand Prix in Shanghai is back on Formula One's planned schedule for 2023, but it's unclear if China's stringent COVID-zero policy will let it take place. The last race there was early in 2019.

“Of course, it’s great to see the Chinese Grand Prix back on the calendar,” Zhou said. “Still you know, we have to do a bit of quarantine back home when you go back. Hopefully the situation gets reduced and gets better.”

Both Zhou and Tusnoda have signed extensions with their teams for next season, reflecting the importance to sponsors and teams of having driver representatives two of Asia's most important countries.

“It’s great because — from my side — it just gets a lot of pressure off my shoulders and there’s one thing less to think of," Zhou said, echoing Tusnoda about the contract deal.

“It's great to see the full name back on the car,” said Verstappen, who recalled a family connection to the automaker. “It makes it extra special that they are back on the car just before their home Grand Prix.”