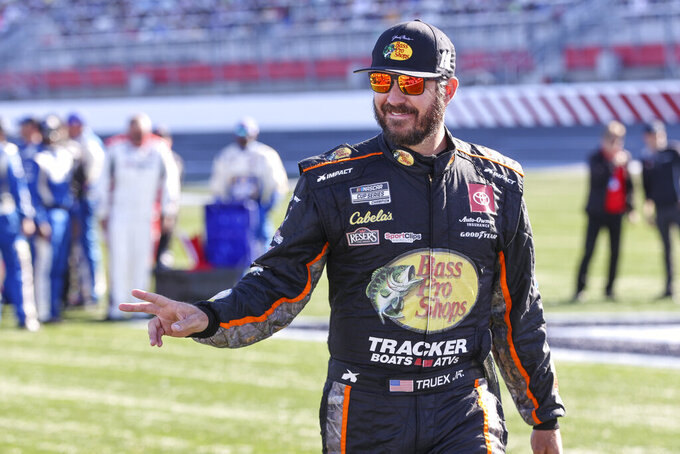 FILE - NASCAR Cup Series driver Martin Truex Jr. walks to his car before a NASCAR Cup Series auto race at Charlotte Motor Speedway in Concord, N.C., Sunday, May 30, 2021. The NASCAR championship will pit Rick Hendrick against Joe Gibbs as both team owners put a pair of drivers in the final four. Chase Elliott and Kyle Larson will represent Hendrick in a pair of Chevrolets. Gibbs will field Toyotas for Denny Hamlin and Martin Truex Jr. (AP Photo/Nell Redmond, File)

PHOENIX (AP) — Martin Truex Jr. stood on pit road moments after his first victory at Phoenix over a Cup career stretching nearly 20 years and quickly put a target on a more meaningful race at the track.

“I wish it was November,” Truex said. “Hopefully, we can come back in November and have a shot at the championship.”

Eight months later, Truex is back in the desert and, just as the Joe Gibbs Racing driver hoped, does indeed have a shot at the NASCAR Cup Series championship.

Truex didn’t quite call his shot and guarantee his spot in the field, but the 2017 champion had good reason to feel like he’d back among the four drivers racing for the title Sunday at Phoenix Raceway. This is the fifth time since 2015 that Truex races with the championship at stake and, with two previous runner-up finishes, he has as good a shot as any of the other three drivers to win it all.

Always a threat on the track, Truex is the most unassuming championship contender in Cup.

Denny Hamlin is fueled by raw emotion from dust-ups with other drivers and, like his fellow 23XI owner Michael Jordan, finding any slight to use as motivation. Kyle Larson’s return from suspension for a racial slur into the driver to beat has been the story of the season. With a second straight title in sight, Chase Elliott attends World Series games and screamed himself hoarse rooting for the Atlanta Braves.

About the only time a light shines on Truex outside of racing is when he walks the runway to raise money for charity.

“Luckily, I haven’t been in any confrontations lately,” Truex said Thursday. “It’s always good to not have enemies when it comes to a race like this.”

A year after his worst season since he blossomed into a perennial contender, Truex quietly went about his business and won four races. The 41-year-old New Jersey native prefers fishing and hunting in his down time rather than creating off-track headlines. Hamlin and Larson had the bulk of the media attention when the four drivers simultaneously spoke ahead of this weekend’s finale.

Spending time in the championship spotlight, though, sure beats the alternative — not racing for the title at all. Truex’s four wins marked the fifth time since 2016 he’s reached that total, including in 2017 when he won a career-best eight times. But last season, Truex stumbled in the first season he was paired with crew chief James Small. He had only one win driving the No. 19 Toyota and finished seventh in the points standings last season.

The first real sign he was on the rebound came in March when he blew past Joey Logano on the final restart and pulled away to win for the first time in 31 career races at the mile track.

“That the was best car I ever had here my whole career,” he said. “The car felt really good and did a lot of good things. If we can make that happen again, and hopefully have even more speed, we’re going to be tough to handle.”

Truex won the second playoff race at Richmond and drove a battered car last week at Martinsville into the fourth and final slot in the playoff field. While his win in the spring gave his repeat bid a boost, Truex has traditionally struggled at Phoenix and has only five top-fives with four DNFs in his career.

Truex, who signed a contract extension before the Daytona 500, had three career Cup Series wins in his first 10 full seasons before his career took off in 2016 at now-defunct Furniture Row Racing. He has 28 of his 31 career wins since 2016 and is a perennial championship contender. Truex raced with FRR for the title in three of the last four seasons — he won in 2017 and was runner-up to Logano in 2018. He finished second again in 2019 in his first season with JGR.

Truex held the lead in 2018 with 12 laps to go when the championship race was at Homestead-Miami before Logano caught him down the stretch and his 2019 bid was marred by a tire mix-up in the pits that cost him his shot at catching Kyle Busch. The 312-mile race on Sunday means time is short to try and overcome late problems that may arise.

“The last two we’ve been in, we’ve finished second and probably had the best car,” Truex said.

JGR teammate Hamlin has two wins and time is running short for the veteran to win his first Cup championship. Larson has nine wins driving for Hendrick Motorsports and teammate Elliott has two.

“I feel like the best four teams are in the final four,” Larson said.

With a win, Truex would join Kyle Busch as the only active drivers with two championships.

“We know we have a great shot at it. But we don’t have the weight of the world on our shoulders,” Truex said. “We’ve done this before. We’ve been here before. We understand what it takes.”