Sign of the times: Vettel furious as Hamilton wins in Canada 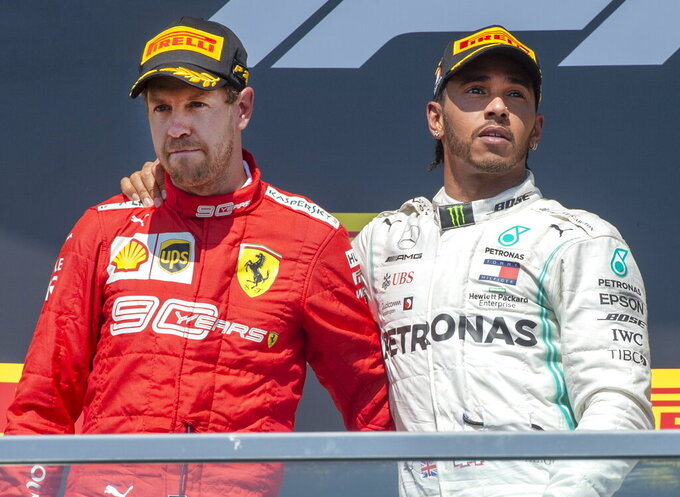 Ferrari driver Sebastian Vettel was red with rage at being stripped of a much-needed win at the Canadian Grand Prix on Sunday.

So the four-time Formula One world champion took matters into his own hands — literally.

After getting out of his car with his helmet still on and stomping back to his garage, Vettel then made his way to the post-race grid.

The Montreal crowd watched in amazement as Vettel theatrically grabbed the big No. 1 sign parked in front of race winner Lewis Hamilton's Mercedes car and moved it to where his Ferrari should have been in the empty No. 2 slot.

Then Vettel did the opposite with the No. 2 sign, hauling it over and dramatically plonking it in front of Hamilton's car.

The crowd cheered, as if witnessing a moral victory.

"Obviously I'm angry, as you can imagine," Vettel said. "I gave everything I had today and more."

Vettel had started from pole position and crossed the finish line narrowly ahead of Hamilton.

But Vettel had been given a five-second time penalty for an incident which happened with a little more than 20 laps to go. Despite Vettel taking the checkered flag, that penalty gave the five-time F1 champion Hamilton his fifth win in seven races and 78th overall.

Vettel, meanwhile, has not won in 15 races — a dismal run at the most storied team in F1.

His mistake was basic, unfair time penalty or not.

He went into the grass with Hamilton pressuring behind him, and then swerved back onto the track, forcing Hamilton to brake suddenly to avoid crashing into the barriers to the right of the track.

But amid the anger Vettel did have a point.

F1 carved its reputation in decades of daredevil acts and used to be famed for such high-speed drama but here it was deemed preferable to fine Vettel for an unsafe re-entry back onto the track.

Vettel took a swipe — or rather a full-blown lunge — at governing body FIA, saying the reasoning of the stewards went against the spirit of motor racing.

"It is not making our sport popular. People want to see us race, and it was racing. Just a shame when we have these funny decisions," Vettel said. "I just wish I could be as good as I am ... but in the old drivers' time. We should be able to say what we think, but we can't. I disagree with where the sport is now. It's not the one I fell in love with."

Strong words from Vettel, who finished ahead of his Ferrari teammate Charles Leclerc with Mercedes driver Valtteri Bottas in fourth place and taking a bonus point for the fastest lap.

In the standings, Hamilton is 29 points clear of Bottas and already 62 ahead of Vettel heading into the French GP in two weeks' time.

An exasperated Vettel said on team radio "they're stealing this race from us" — and the stewards' decision clearly festered for the remaining laps — but it was another Vettel blunder following multiple mistakes in losing the past two championships to Hamilton.

Vettel's barren streak dates back to the Belgian GP last August, while his longtime rival Hamilton is well poised in his bid for a sixth F1 title to move within one of Michael Schumacher's all-time record.

Hamilton and Schumacher have both won the Canadian GP a record seven times.

Hamilton showed a touch of class on the podium, grabbing Vettel's arm and pulling the German alongside him on the top step. Hamilton was asked for his view and some of the crowd jeered when he said "all I can say is I didn't make the decision."

Vettel intervened quickly and told the crowd not to boo Hamilton, but to jeer the stewards' decision itself.

"We have very great respect for each other," Vettel said. "I heard some fans booing when Lewis got his trophy. I will defend Lewis 100 percent here because it wasn't him."

Mercedes has now clinched seven straight wins this season — and nine in the past 10 races overall — and Ferrari has not won since former driver Kimi Raikkonen's victory at the United States GP in October last year.

Once again, Vettel seemed to have the race under control only to lose his composure.

It is the third straight season he is making panicky errors.

He span his car with Hamilton behind him in Bahrain earlier this season, went into the barriers when leading the rain-soaked German GP by nearly 10 seconds last July; and crashed from pole at the Singapore GP two years ago.

This time, the mistake was made on a bone-dry track and in perfect weather conditions.

The excuses are running out fast for Vettel, unfair decisions or not.