Kirkwood tries to impress driving for Foyt in 1st Indy 500 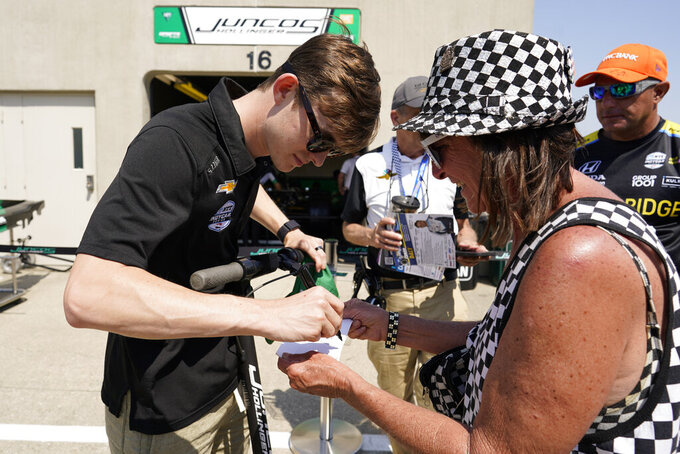 Callum Ilott, of England, signs an autograph for a fan during practice for the Indianapolis 500 auto race at Indianapolis Motor Speedway, Friday, May 20, 2022, in Indianapolis. (AP Photo/Darron Cummings)

INDIANAPOLIS (AP) — Kyle Kirkwood won at every level during his slow climb through the ladder system to a seat in the top open-wheel series in North America.

Now the Floridian will make his Indianapolis 500 debut driving for none other than A.J. Foyt, one of the greatest drivers in history. Foyt won the Indy 500 four times and, along with Mario Andretti, is the only driver to win at both Indy and the Daytona 500.

Kirkwood, one of six rookies in the field, will pilot Foyt's famed No. 14 in “The Greatest Spectacle in Racing."

“Everyone tells you how legendary this place is, but you don't understand until you see it," Kirkwood said. "You come to Indianapolis Motor Speedway and see A.J. and see him interacting with fans, and understanding how far back his legacy goes, and I now realize how special it is to drive that No. 14 car and represent him at this special place.”

The 23-year-old has had a long climb to make it into IndyCar, and now that he has arrived, his stock is skyrocketing. Although his best finish is 10th through five IndyCar races — Kirkwood has crashed out twice — he has taken mediocre A.J. Foyt Racing cars and made them look competitive.

Kirkwood starts 28th on Sunday, next to Foyt teammate Dalton Kellett and in the same row as two-time Indy 500 winner Juan Pablo Montoya.

When the race ends, Kirkwood will turn his attention to a big week in Detroit. Vasser Sullivan has asked Kirkwood to drive in the IMSA sports car sprint race at Belle Isle, the first time Kirkwood will be used by the Lexus team in a role other than endurance driver.

“It’s been a while since I’ve been in the car and I’m looking forward to competing in my first sprint race,” he said. “I will be doing double duty in Detroit, racing in both IndyCar and IMSA, and that means more track time for me.”

The double-duty weekend helped Kirkwood draw suitors across the industry. He was developed by Andretti Autosport, but the team didn't have an open IndyCar seat for him this year. Kirkwood has also been a key part of Vasser Sullivan and he's a favorite of Lexus parent company Toyota.

Andretti is expected to have an open seat next year that could allow the team to pull Kirkwood back in house, but Kirkwood doesn't want to lose his sports car relationship with the Vasser Sullivan organization.

He's got a big race Sunday to set the tone for a frenzied free agency period in which Foyt is unlikely to keep Kirkwood.

Could Vasser Sullivan be in the mix? The team pulled out of IndyCar this year to focus on its Lexus sports car program, but team co-owner James Sullivan said they are working on a return.

“Vasser Sullivan will 100% be returning to IndyCar. We have a big responsibility in graduating with LEXUS to GTD Pro, and quite frankly it deserves, and requires, our undivided attention at the moment," he said.

Callum Illot is a reserve driver for Formula One team Alfa Romeo and was in its uniform earlier this month at the inaugural Miami Grand Prix.

But the British driver then hustled back to Indianapolis for his full-time job as IndyCar rookie for Juncos Hollinger Racing, a one-car team that qualified 19th for Illot's Indianapolis 500 debut.

Illot has settled in to the IndyCar Series and its friendly paddock and confirmed he's not presently pursuing any F1 opportunities.

“I'm not actively looking for anything in F1. If something comes up, brilliant, but it's not something I'm chasing at the moment,” Illot said. “It hasn't been so kind to me and I think (IndyCar) has a big growing interest and people are definitely talking a bit more and I'm a bit more well known."

The contract extension Pato O'Ward announced Friday with Arrow McLaren SP has “potential opportunities” for the Mexican driver in Formula One.

But what exactly that means is not clear.

Nor is it clear if O'Ward will achieve his childhood dream.

His extension with McLaren's IndyCar team is through 2025 and O'Ward, who turned 23 this month, had hoped to be in F1 within the next two seasons. Now he's not so sure.

“I think that deadline is there just because of age,” O'Ward said. "I think once you're 25 or 26, that window closes quite a bit. My dream of becoming a racing driver came about through Formula One, and that's something that is never going to leave.

“But right now I am fully focused on what we have to do. I am enjoying myself so much right now, so just drive the race car, win races. If I get a shot at driving those special (F1) cars, that would be awesome. But I’m just really grateful to be in the position that I’m in now."

Marco Andretti has a familiar voice in his career calling the shots at the Indy 500. Team owner Michael Andretti returns as the strategist for his son’s 17th attempt at winning the race.

“The two of us work a lot better nowadays then when I was a rookie and didn’t think dad knew what he was talking about,” Andretti said. “Now he definitely doesn’t because I have more starts than him here.”

Marco Andretti won the Indy 500 pole in 2020 but faded to 13th. He stopped racing full time but returned for last year’s Indianapolis 500. This year’s race is the only one on his IndyCar schedule.

“This is my bread and butter at this place and this is the one that pays,” he said.

“You could wake me up out of my sleep and I’ll go drive the speedway. I love it here,” he said. “I think this is the first year that I was actually cold for a year because we finished 2020 going into ’21, and that race was in August in ’20. Yeah, this was as cold as I’ve been, and I don’t feel behind anybody or anything.”