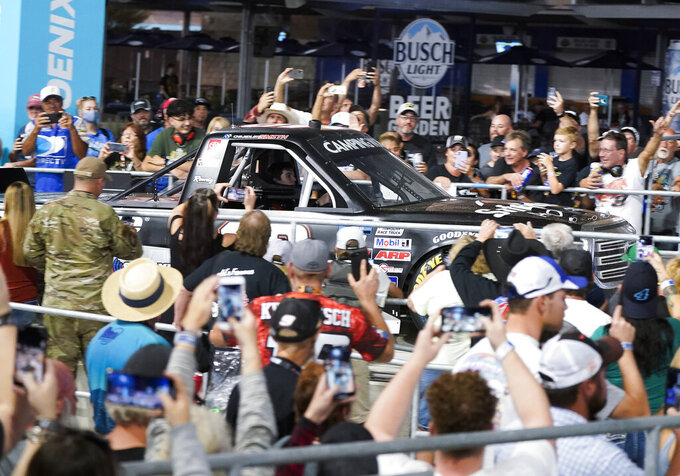 Rhodes finished third at Phoenix Raceway behind race winner Chandler Smith and Stuart Friesen. But he was the first championship contender to cross the finish line and claimed his first NASCAR championship.

Rhodes won for ThorSport Racing, a Truck Series team since 1996 based in Ohio. The team this year returned to Toyota, which claimed the first of three national series championships being awarded this weekend at Phoenix.

Rhodes won the fourth drivers championship for ThorSport — the team won in 2013, 2014 and 2019 with Matt Crafton — but it was the first owner championship for Duke and Rhonda Thorson. The couple fielded their first truck in the series with driver Terry Cook at the Milwaukee Mile on July 6, 1996.

Rhodes needed a late pass of fellow title contender Zane Smith to win the title. He chased Smith for two dozen laps before getting past him for the title-deciding position with eight laps remaining.

“That was the hardest last 40 laps I’ve ever driven in my life. I was doing things with my race car that were dumb, but we had nothing to lose,” Rhodes said. “Bookends for the season, I am so proud of my ThorSport team.”

The championship was the first for crew chief Rich Lushes, who had never finished higher than ninth — with driver Myatt Snider in 2018.

Smith finished fifth, behind outgoing Truck Series champion Sheldon Creed, and was runner-up for the title. He sat dejected on the pit road wall after the race.

“I just needed for my truck to turn, man," Smith said. "But still an insane year, really. We were eight laps away from winning a championship.”

The Rhodes title in his six full season was a bit of an upset in that five-race winner John Hunter Nemechek was the favorite in another Toyota fielded by Kyle Busch. But Nemechek had an early tire issue in the first stage that dropped him two laps behind the leaders and it took him the entire race to make it back on the lead lap.

His break came with the fourth and final caution and Nemechek cycled back to the lead lap, but in the bottom third of the field. Busch paced nervously beside the pit box as Nemecheck tried to pick his way through traffic for the final 40 laps.

“I got run in to the first corner, got in to the fence, somebody else ran in to us on the left side and this thing is killed pretty much, but had a left front tire go flat, went down two laps, got both of our laps back, but just needed more laps, I guess," Nemechek said. “Felt we had the best truck tonight, playoff-wise for sure. Drove from pretty much last to seventh there and running down Ben and Zane for the championship, just not enough. That’s what’s frustrating.”

The slight consolation was that Kyle Busch Motorsports still celebrated its 10th win of the season with Smith's race victory, his second of the year.