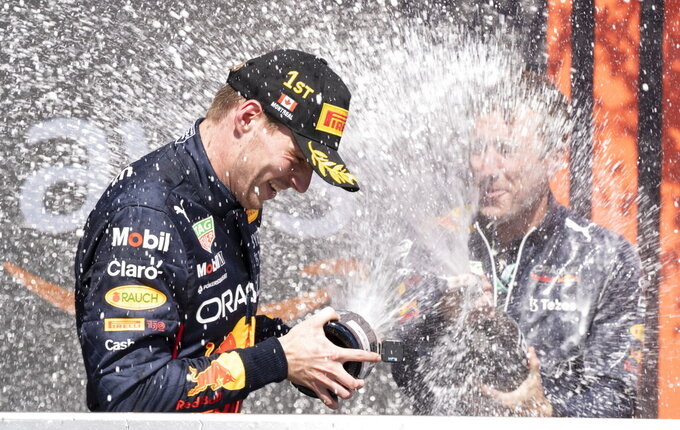 Red Bull Racing Max Verstappen, of the Netherlands, is sprayed with champagne by members of his team after winning the Canadian Grand Prix in Montreal on Sunday, June 19, 2022. (Paul Chiasson/The Canadian Press via AP)

Fast facts: Suarez became the 12th different winner through 16 races, enhancing the possibility with 10 regular season races remaining that not all race winners will automatically qualify for the 16-driver playoffs. ... Five of the top 12 drivers in the points standings have yet to win a race this year. ... Chase Elliott leads the standings by 16 over Ross Chastain, 23 over Kyle Busch and 25 over non-winner Ryan Blaney. ... Denny Hamlin, one of four two-time winners, remains the lowest winner in the standings; he's 21st, 211 points behind Elliott.

Last race: A.J. Allmendinger led only six of 75 laps but beat Myatt Snider by 2.879 seconds for his second victory of the season — both on road courses — in the series' debut at Portland International Raceway.

Fast facts: Allmendinger's victory came after he started last because of pre-race changes to his car, and after he went a lap down. ... Allmendinger's points lead increased to 43 over Ty Gibbs and 44 over Noah Gragson. ... The top eight drivers in points have accounted for 12 victories through 14 races. ... Only 21 of 38 cars finished on the lead lap on the 1.97-mile circuit in the Portland debut.

Last race: Todd Gilliland passed John Hunter Nemechek on the 140th of 150 laps and pulled away after a restart on Lap 147 to win on the dirt in Iowa, winning his first start of the season and for the third time in his career.

Fast facts: Gilliland became the sixth non-regular in the series to win through 13 races. ... Nemechek regained the point leads, vaulting from fourth. He leads Zane Smith by five, defending series champion Ben Rhodes by 10 and Chandler Smith by 14. ... Zane Smith (3) and part-timer Corey Heim (2) are the only multiple winners thus far this season.

Last race: Defending series champion Max Verstappen won from the pole, his fifth victory in six races and sixth overall, in the series' return to Canada after a two-year hiatus because of the pandemic.