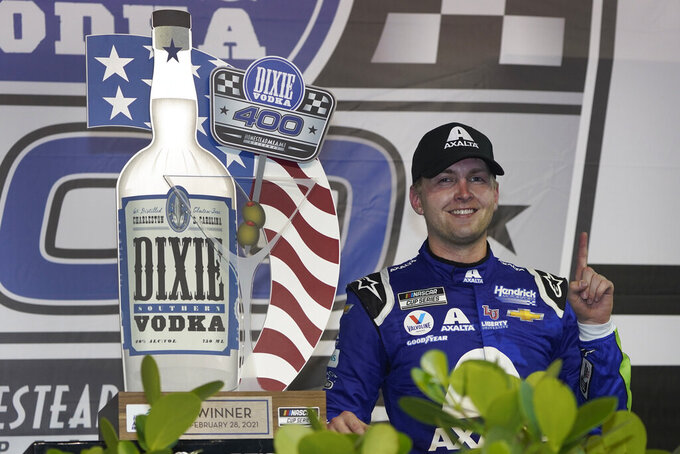 Last race: William Byron pulled away as three cars battled behind him at Homestead-Miami Speeday to win for the second time in his career.

Fast facts: Byron is 13th in the points race after three races. ... Points leader Denny Hamlin and Kevin Harvick are the only drivers with two top-five finishes. ... Harvick and Daytona 500 winner Michael McDowell are the only drivers with top-10 finishes in all three races. ... Byron's victory was the 264th for Hendrick Motorsports, four behind Petty Enterprises for most all-time in the top series.

Last race: Myatt Snider cashed in on the second overtime restart and held off Tyler Reddick at Homestead-Miami Speedway.

Fast facts: Snider is second, behind defending series champion Austin Cindric, in the points race after three events. Ty Gibbs, who won on the Daytona road course. is 16th in points. ... Reddick's second-place finish didn't stand because he failed the post-race inspection. ... Snider's first career victory came in his 36th start in the series.

Last race: Ben Rhodes made it two wins in two races with a victory on the Daytona road course.

Fast facts: Rhodes, John Hunter Nemecheck and Sheldon Creed are the only drivers with top-10 finishes in both races run this year. ... Rhodes is just the third driver to open the season with back-to-back victories in the series. His second victory was the 200th for Toyota in the series.