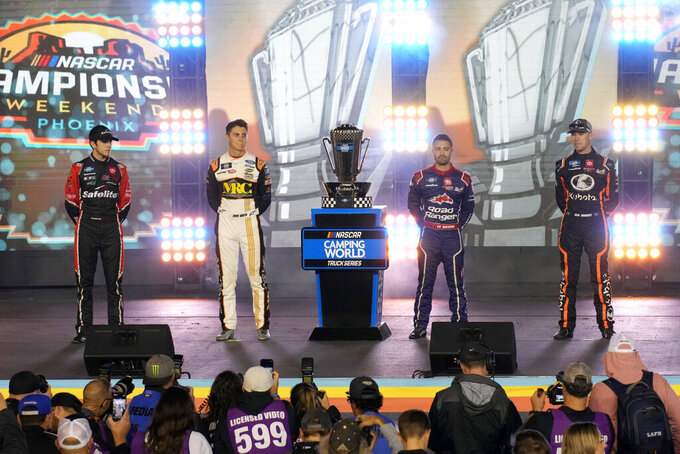 AVONDALE, Ariz. (AP) — It took overtime in his third attempt for Zane Smith to finally win a NASCAR championship.

Smith finished second in the championship finale the last two years, and left Phoenix following his 2021 defeat without a job. He was picked up by Front Row Motorsports and delivered the Ford team its first Truck championship.

“Third time's a charm,” Smith said. “I was crying that whole lost lap. For so long I've wanted this moment, all my life. That's all I've got.”

Smith won the first two stages but a slow pit stop ahead of the final stage dropped him into traffic and forced him to work his way back to the front. Then a series of cautions took the race out of Smith's control.

He took four tires on a later caution and it dropped Smith to 11th in the field. Rhodes, meanwhile, took two tires and left pit road leading the four title contenders.

Rhodes took the lead with seven to go, the same lap Smith made his way to second on four new tires. Then a spin by championship contender Ty Majeski as the playoff drivers ran first through fourth sent the race to overtime.

Smith chose to restart on the inside behind Rhodes, and Chandler Smith in third quickly moved up to the open spot on the front row for the restart. Zane Smith immediately made it three-wide to take the lead and win his fourth race of the season, and finally a title.

“I wasn't going to let it go down like that,” Zane Smith said of potentially finishing second for a third consecutive year.

“I was wrecking or winning this thing, There was no other option.”

Rhodes finished second in near defense of his title.

“I'm going to mope all the way back to Kentucky," said the Toyota driver.

Chandler Smith finished third in his final race with Kyle Busch Motorsports and Toyota. Busch is moving his trucks to Chevrolet next season and Chandler Smith will race in the Xfinity Series for Kaulig Racing and Chevy.

Majeski fell to 20th after spinning trying to make a pass for the win.