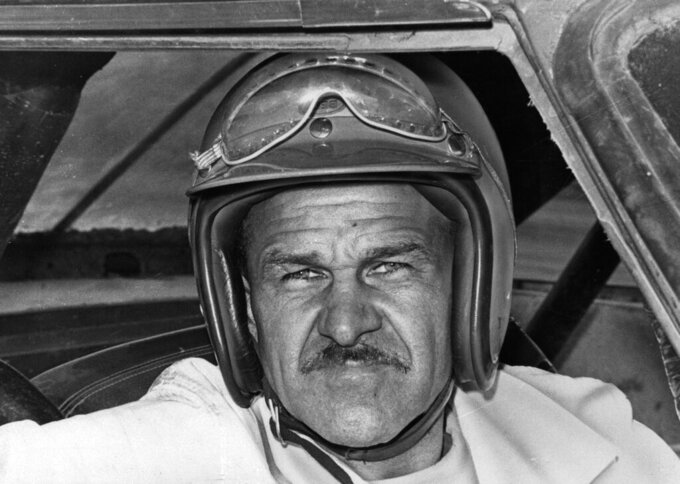 FILE - In this Aug. 1, 1969, file photo, Wendell Scott sits in a race car, location not known. NASCAR will celebrate the legacy of NASCAR Hall of Fame driver Wendell Scott and present the Scott family a trophy commemorating the driver’s historic race victory at Speedway Park in Jacksonville, Fla. in 1963. A native of Danville, Va., Scott was the first African-American driver in NASCAR to win a race in the sport’s top series. (AP Photo/File)

DAYTONA BEACH, Fla. (AP) — Wendell Scott told friends and family members for years he would one day get his trophy.

It's finally here. Nearly 60 years late, about 100 miles from the site of his historic victory and one day shy of what would have been Scott's 100th birthday.

NASCAR will present Scott's family a custom trophy commemorating his historic 1963 victory before Saturday night's race at Daytona International Speedway. Scott was the first and remains the only Black driver to win a race at NASCAR’s top level.

“Wendell Scott's legacy as a man is rooted in community, in outreach and the work that we’ve been doing for so many years," grandson Warrick Scott said Friday. "This moment crystalizes that all things are possible. In this moment in time diversity is a really big topic and Wendell Scott built an ultimate bridge for diversity, not just within this sport but within the minds and ideologies of different people who didn’t know how to share space together.”

Scott passed Richard Petty with 25 laps remaining at Speedway Park in Jacksonville on Dec. 1, 1963, in the Jacksonville 200.

Buck Baker, who actually finished second, was declared the winner and received the trophy in victory lane. Race officials discovered hours later that Scott was the actual winner and had lapped the entire field twice. But he was not credited with the victory for another two years, and his family has long pushed for a proper celebration.

“It matters because my father earned it and it was something he had to labor on," son Frank Scott said. "He always wanted to get his trophy and he predicted that he would get his trophy one day. He said, ‘I may not be here with you all, but one day I’ll get my trophy.’

"It’s important because I see the growth in NASCAR and I see the growth in diversity that didn’t used to exist, and I think that’s something that this will lay a really solid foundation to build on. Not saying they don’t have a foundation now, but ... we got it right. When you learn better, you do better. It’s been a while, but we’re enthusiastic about it. We’re not getting stuck in the past.”

Scott retired because of injuries suffered in a 1973 crash at Talladega Superspeedway and the Danville, Virginia, native died in 1990 of spinal cancer.

He was inducted into the NASCAR Hall of Fame in 2015, two years after the city of Danville awarded Scott a historical marker. The statement on the marker praises Scott for “persevering over prejudice and discrimination, Scott broke racial barriers in NASCAR." In a 13-year career, Scott notched 20 top-five finishes.

Wallace is currently the only full-time Black driver in NASCAR and has occasionally commemorated Scott's contributions to the sport through paint schemes and partnerships with Scott's family.

Wallace is in his fourth full season in the Cup Series and drives this year for 23X1 Racing, a first-year team owned by both Denny Hamlin and Michael Jordan. He has six career wins in the Truck Series, but is winless in 137 starts at the Cup level.

NASCAR picked the regular-season finale for the presentation because of its proximity to Jacksonville and because it comes on day before what would have been another landmark event for Wallace.

“As many of you all are aware, that historic moment wasn’t celebrated in the way that it should have been," said Brandon Thompson, NASCAR vice president, diversity and inclusion. "It is certainly one of the most iconic and monumental moments in American stock car racing history and dare I say even motorsports history as he became the first Black driver in NASCAR to win and the only Black driver to date to win a race.”