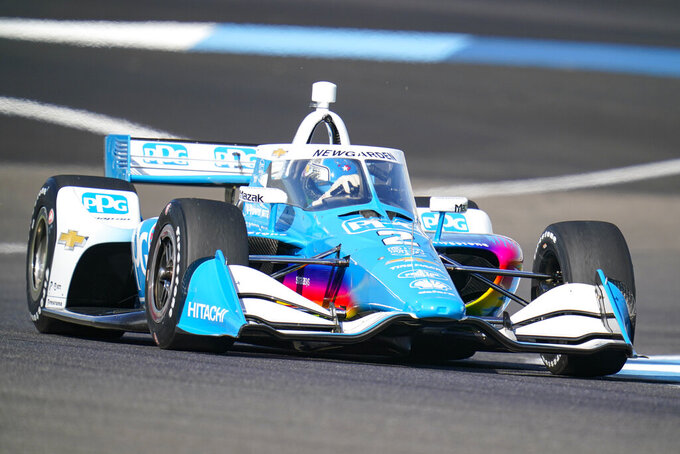 INDIANAPOLIS (AP) — Josef Newgarden has been IndyCar's most consistent winner over the last eight seasons.

His 22 trips to victory lane are a series high. He has won two or more races six straight years and is chasing his third league championship in six seasons.

But when the 31-year-old Tennessean arrives in Indianapolis each May, those impressive feats take a backseat to another agonizing litany of questions about the most famous three words missing from his resume — Indianapolis 500 champion.

A 500 win certainly would cement Newgarden's claim as one of his generation's greatest drivers. Until that day comes, though, the series' one-time heartthrob continues to relive all the heartaches he's endured at the Brickyard.

Despite consistently ranking among the month's fastest drivers, working for the most successful team in series history and calling a handful of 500 champions teammates with Team Penske, Newgarden has continued to fall short.

He's never won the pole, never driven into victory lane and has only one front-row start. Heck, his best May didn't even come with Team Penske. In 2016, he started a career-best second and finished a career-best third driving for Ed Carpenter.

Roger Penske hired Newgarden the following season and he's won at 11 of this season's 15 venues with two notable spots among the missing — his hometown of Nashville and Indy. He has never started or finished higher than fourth for Penske.

"You look at this place and it chooses you and you’ve just got to be ready when it does,” Team Penske President Tim Cindric said. “It’s the same questions all the time until you do win. You see it in NASCAR, too, with Kyle Busch or Tony Stewart at the Daytona 500.”

Newgarden, like Busch, is fortunate. He’s still in the prime of his career and still a feared competitor.

But everyone understands IndyCar success is measured by wins at Indy.

Mario Andretti won the 500 in 1969 but started 24 more without winning a second title. Hs son, Michael, and grandson, Marco, each started 16 more 500s without a win. Michael Andretti's 42 career wins are No. 4 on the series' career list.

In Newgarden's 10 Indy 500 starts, the first with Sarah Fisher's team, he's had three top-10 finishes and five finishes of 12th or worse.

Other drivers understand the pressure, of course. Will Power of Australia also had a sterling resume but was 0 for 10 at Indy before finally winning in 2018.

“It was painful for me because I had won so many races, poles, I had won a championship,” Power said. “I was actually disappointed coming into ’18 with my career because I know you’re not regarded as a successful driver unless you’ve won this race.”

Yet Dixon would almost certainly give up some of those numbers to put a second Baby Borg in his trophy room.

“You always have unfinished business here," said Dixon, the 2008 winner. “I love this place. It can be cruel sometimes, but I feel very privileged to be here and be with a team like this."

A breakthrough win next weekend would change Newgarden's life.

He'd grab headlines, hit the interview circuit, maybe even reinforce his image as America's top IndyCar driver. But most of all, Newgarden would no longer have to answer all the questions about those three most elusive words.

“I don't know what a win would mean, I've never experienced it," Newgarden said. “But I see it. When you talk to 500 winners, you know what it means.”