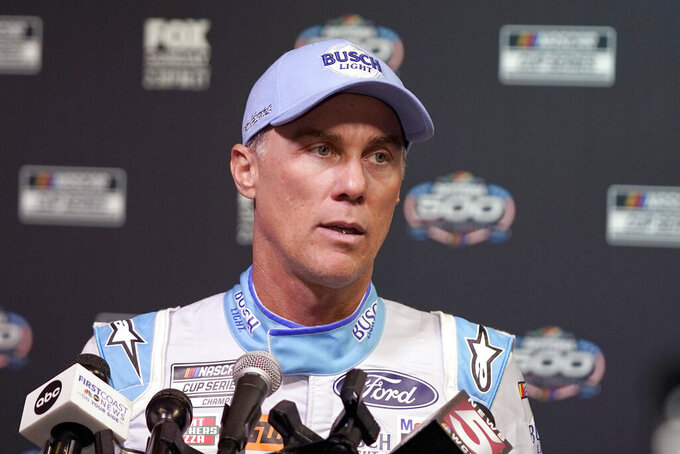 FILE - Kevin Harvick is shown during NASCAR Daytona 500 auto racing media day at Daytona International Speedway, Wednesday, Feb. 16, 2022, in Daytona Beach, Fla. Kevin Harvick is a fading star trying to keep pace in a NASCAR that is more and more suited for younger drivers. But he heads to Martinsville Speedway coming off a second-place finish that showed Harvick still has plenty in his tank. (AP Photo/John Raoux, File)

CHARLOTTE, N.C. (AP) — Kevin Harvick, by all measurable statistics, is a fading star trying to keep pace in a NASCAR that now seems more suited for younger drivers.

He's 46 years old, after all, and in his 22nd full NASCAR season. Harvick went winless all of last year — he actually hasn't won since late in the 2020 season — and his 9-year-old son has his own thriving racing career.

A slow start to the season hasn't helped.

It's been NASCAR's younger drivers who have been fastest to adapt to the new Next Gen car, with Harvick among the veterans still trying to figure it out. He and Stewart-Haas Racing finally hit on something last week at Richmond to score their best finish through the first seven races; Harvick ran second to Denny Hamlin.

The Hamlin win snapped a 12-race streak dating to last season of race winners aged 30 or younger, and the 1-2 finish with Harvick showed that NASCAR's veterans still have plenty in the tank. As he heads to Martinsville Speedway for a Saturday night race at the Virginina short track, Harvick warned not to count out the No. 4 team: Harvick is committed to SHR, NASCAR and winning a second Cup Series championship.

“I like where I race. I like Stewart-Haas Racing. I like the atmosphere. I like the people," Harvick said. "That’s really the biggest reason that I like to do it, especially this year. You’re with a group of people where you’re constantly problem solving. You’re trying to fix it faster than everybody else and come to something that is better than everybody else so you can win races.

"I like the core group of guys that I started here with. That’s why they all came here, and I guess I would feel like I’m abandoning them if I didn’t go a couple more years. For me, I still enjoy that challenge. I enjoy where this series is, and learning about the new car is not a bad thing to do as you go forward into the future and do something different.”

Harvick is in his ninth season driving the No. 4 Ford for SHR, the team that led him to his only Cup title in their 2014 debut season. He's an annual title contender, though, and went door-to-door with Hamlin all of 2020 in what was shaping up to be an epic title battle.

Although Harvick won nine races that season, he was eliminated from the title-deciding race the week before the championship. Last season was off across the board for SHR, and even though he was winless, Harvick still finished fifth in the final Cup standings.

This year hasn't been awful, but Harvick simply wasn't as competitive as typically expected through the first six races of the season in NASCAR's new car. But Harvick said he and crew chief Rodney Childers expected early growing pains and worked hard during the offseason to troubleshoot in advance.

“We’ve put in a lot of time this year; the simulator, we’ve been to two tests so far," Harvick said. "We knew coming into this year that we had some habits we were going to have to break, thought processes that you were going to have to break, to really understand this car, and I think we’ve done a pretty good job of that with all the adversity we’ve gone through so far this year.

"Martinsville will just be more of that same process, and that’s going to be our aggressive process until we get to victory lane.”

At 0.526 miles, Martinsville is the shortest track on the schedule and its tight corners and limited 12 degrees of banking lends to a physical race. It's also NASCAR's oldest speedway and entrenched in the sport's history.

However, it's so much of a challenge that Harvick said: “I definitely would tell you it’s not a racetrack that I would say, ‘This is where I want to go.’ It’s just not been a place where I’ve had streaks of success."

Indeed, he's won at Martinvsille in all three of NASCAR's national series. But his 2011 victory is his only Cup win in 41 starts at the Virginia short track. From what he's seen of the Next Gen so far, Harvick expects a good deal of bumping and banging Saturday night.

He knows the Next Gen car can withstand the contact and, had he gotten close enough to Hamlin on Sunday at Richmond, Harvick admitted he'd have tried to move Hamlin for the win.