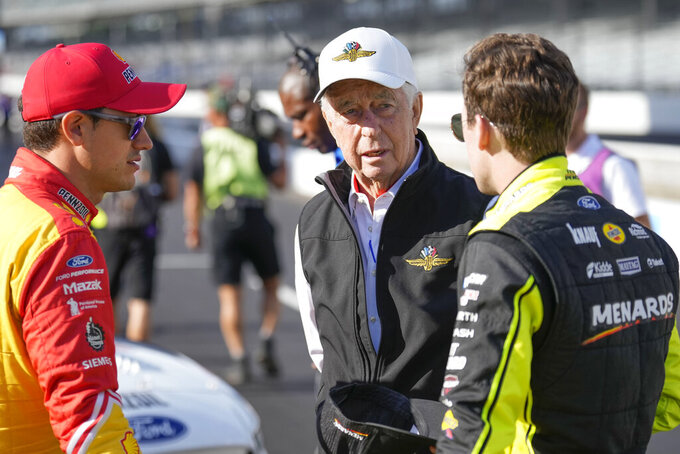 It all seemed so promising at the start of the NASCAR season for Ford and its teams, particularly Jack Roush's rebranded organization with new driver/owner Brad Keselowski.

Joey Logano of Team Penske won the exhibition Busch Clash at Los Angeles Memorial Coliseum in January ahead of NASCAR's shift to Daytona International Speedway and the start of the season.

It was there that Keselowski, who left Penske for an ownership stake with Roush, took the longtime NASCAR team owner back to victory lane for the first time since 2017. Keselowski drove the rebranded Ford for RFK Racing to a victory in a Daytona 500 qualifying race. About 90 minutes later, Chris Buescher took Roush back to victory lane with an RFK sweep of the two qualifying races.

Three days later, Penske rookie Austin Cindric won the Daytona 500 to give Ford wins in the first four Cup events of the year.

And now? With just a month remaining before NASCAR's playoffs begin, Ford is bringing up the rear in the manufacturer battle. Three drivers have combined for four Ford victories through 22 points races, and Logano has two of the wins. His victory in June in St. Louis was the last Ford win, and at fourth in the Cup standings, Logano is the highest-ranked Ford driver.

Cindric and Chase Briscoe for Stewart-Haas Racing have the only other two wins for the blue oval bunch as NASCAR shifts into their backyard at Michigan International Speedway.

“Four wins is not enough. It’s not acceptable,” said Mark Rushbrook, global director of Ford Performance Motorsports. "We need to get more wins. We need to have drivers further up the standings and hopefully at least four if not more drivers into the playoffs.

“It’s certainly going to be hard with where we are with only four regular-season races left. It’s been a struggle with the new car, the new package with getting our head around it, and how to set it up properly going to the track and optimizing it.”

Chevrolet has been the dominant brand this season with 13 wins — Chase Elliott has a series-high four victories — and Toyota has five victories.

Keselowski returns to his home track feeling confident about RFK's recent progress. The native of Rochester Hills believes the team is on “a little bit of an upswing" and thought he and teammate Buescher were fast on the road course at Indianapolis last week.

“We seem to be getting better every week, and the team’s starting to click and we’re starting to figure out some of the missing pieces,” Keselowski said. “We’re going to give it all we got. I’m in this for the long haul. I want to keep pushing as hard as I can to get this company to where RFK — both cars — can win races and contend for championships.”

Keselowski has been in a deep hole since March when the No. 6 team was slapped with a 100-point penalty for modifying a single-source part on the Next Gen. It was the harshest penalty on NASCAR's new car until late last month, when NASCAR disqualified Denny Hamlin and Kyle Busch following their 1-2 finish at Pocono Raceway, then docked 100 points from Michael McDowell for another infraction on the Next Gen.

The penalties were a relief to Keselowski because it showed him that NASCAR is treating all teams equally. But he wants more enforcement.

“The reality is that the garage is going through a reset with respect to kind of cutting out the games, and that’s a good thing for us as a sport,” Keselowski said. “I personally think the sport needs more penalties, and that NASCAR needs to be handing them out like candy right now to get control of the garage.

"We’ve been playing a lot of games for a lot of years, and the games have to stop. The games cost a lot of money. The easiest way for NASCAR to stop those expenses is to stop the games.”

That message was delivered throughout the RFK shop after Keselowski was penalized.

“We went through our entire company and said ‘No more games. Nothing goes on in these cars, period,'” he said. "There’s a lot of people inside our own company that didn’t like it, but the reality is NASCAR is setting precedents that needed to be set, that we support being set, that are important to the future of our industry and its viability.”

And even though he's not expecting great things for RFK on Sunday, where the Next Gen will make its Michigan debut with a new tire compound from supplier Goodyear, Keselowski won't stop pushing.

He really wants to win at his home track, where he is 0-for-24, and has personal streaks on the line as well. Keselowski has won at least one race a year every season since 2011, but is winless so far, and he needs a victory to extend his streak of playoff appearances to nine consecutive years.

He's not sure what to expect out of Sunday's 400-miler at Michigan.

“I don’t know what to tell you to expect with the new car, different tires, very little practice," Keselowski said. "It could be complete and utter chaos. It could be the best race ever. It could be somewhere in between. I don’t know. I think that’s in some ways part of the fun of Next Gen is the complete uncertainty every week, what’s going to happen.”

Ryan Blaney sits second in the points standings and is the defending winner at Michigan. But he doesn't have a points-paying win yet this season and needs one to lock down his spot in the playoffs. ... A victory would make Blaney the 11th driver to win consecutive races at Michigan. ... Richard Childress Racing heads into the race with two wins in five races from Tyler Reddick, including last weekend at Indianapolis. RCR will field a car Sunday for Austin Hill to make his Cup debut. Hill will do double-duty and also run Saturday in the Xfinity Series race. .... Chase Elliott is the early favorite, per FanDuel.