Force beats out NHRA royalty in the Four-Wide Nationals 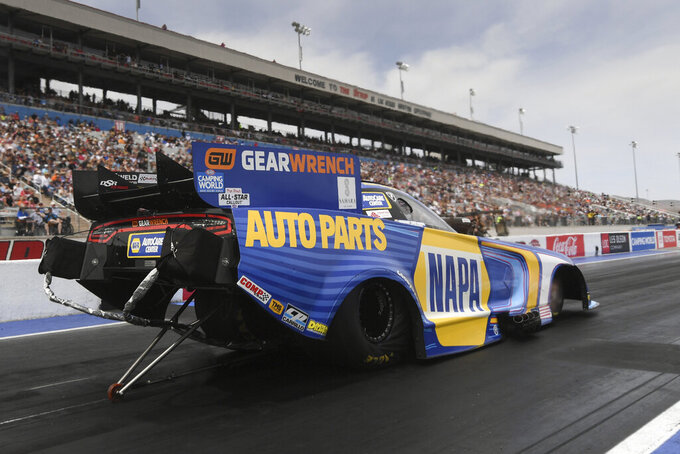 In this photo provided by the NHRA, Ron Capps gets ready for a run in Funny Car at the NHRA Four-Wide Nationals drag races at The Strip at Las Vegas Motor Speedway on Sunday, April 3, 2022, in Las Vegas. (Marc Gewertz/NHRA via AP)

LAS VEGAS (AP) — Brittany Force beat out three other world champions to pick up her first NHRA win of the season at the Four-Wide Nationals at The Strip at Las Vegas Motor Speedway on Sunday.

The 2017 world champion had a run of 3.718-seconds at 338.00 mph in the championship quad of Top Fuel, topping four-time defending world champ Steve Torrence, Tony Schumacher and Antron Brown.

“This is huge for our team,” Force said after her 12th career win. “It was not easy out there and we faced tough competition all day, but we’re excited to get a win like this. You look at that final quad and to get that win, that’s really something to be proud of.”

Erica Enders won the Pro Stock for her second win of the season and ninth in Las Vegas, which is the most in NHRA history. She went 6.668 at 206.32 in her Chevrolet Camaro.