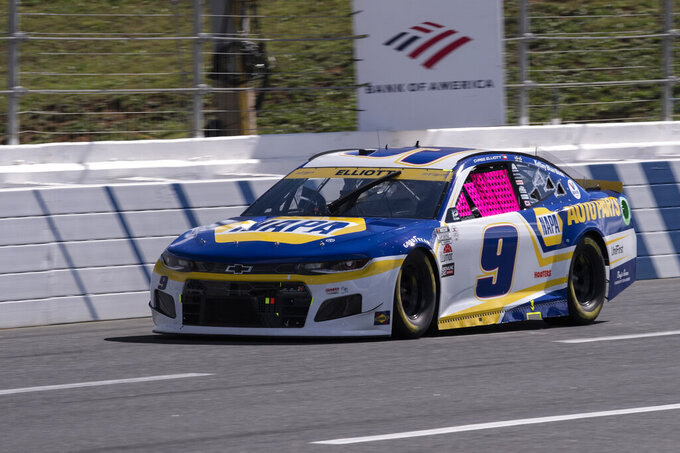 CHARLOTTE, N.C. (AP) — It only took about a day after Chase Elliott wished Kevin Harvick “a merry offseason and Happy Christmas” for NASCAR's reigning champion to get the zinger on merchandise on his official website.

The holiday-themed gear even has its own tab in the online store.

It's the kind of trolling that typically would infuriate Harvick and incite another round of retaliation in his raging feud with Elliott.

Elliott need not worry: NASCAR squashed this rivalry in a conference call with both teams before the drivers even arrived at Texas Motor Speedway for Sunday's opening race of the third round of the playoffs. In a short message delivered to the drivers, their crew chiefs, car owners and manufacturer representatives, NASCAR this week warned of severe consequences if Elliott and Harvick continue their fight.

Alan Gustafson, Elliott's crew chief, indicated the NASCAR intervention was to protect the integrity of the playoffs.

“The message that NASCAR has delivered is they tried to do the best job they could do in allowing it to happen and they’re over it,” Gustafson said on SiriusXM NASCAR Radio. “I commend them for allowing us to race, but I think they’ve had enough. They made that pretty clear.”

Elliott is trying to advance to the championship finale to defend his Cup title. Harvick was eliminated last week when he wrecked himself as Elliott closed in on his rear bumper.

Harvick had wrecked Elliott earlier in the race at Charlotte Motor Speedway as payback for Elliott costing him a win three weeks earlier at Bristol. After the crash last Sunday at Charlotte, which briefly put Elliott in danger of playoff elimination, Elliott was told by his crew to wreck Harvick if given the chance.

He didn't have to do a thing, though, because as Elliott and Harvick headed into the tricky first turn on the hybrid road course/oval, Harvick inexplicably drove straight into the wall. He later indicated the first crash was deliberate payback for Bristol, but Harvick walked away when asked if the feud was over.

Elliott then delivered his verbal jab, team owner Rick Hendrick called on NASCAR to intervene, and NASCAR ultimately shut it down.

The cease fire was met with disdain on social media by fans thirsty for more bumping and banging between two of NASCAR's top stars, but it was welcomed by some of the drivers still in title contention.

Joey Logano, himself involved in his own share of past feuds, was right in front of Elliott when Harvick wrecked him at Charlotte. He said drivers have to be aware of who is mad at who on the track.

“I’m just trying to avoid it, you know? Or at least be aware of the situation,” Logano said. “We follow and understand what the drama is on the racetrack because you can be caught in the crossfire.”

Tony Stewart, co-owner of Harvick's car, refrained from offering his opinion on the spat with Elliott and noted “I respect both of those drivers and me talking about it does nothing to help my organization or me as an owner.” But he acknowledged the frustration of Harvick, who had a series-high nine wins last year but has yet to reach victory lane in 2021.

Harvick has never gone winless since joining Stewart-Haas Racing in 2014, the year of his only title, and only twice in his entire 21-year Cup career.

“It's probably one of the worst years he's ever had, and this has been a frustrating year for all of us in the organization, but for him I guarantee it's been frustrating because this is not the standard that he's used to and that he expects and that he commands,” Stewart said.