Column: 7 desperate drivers have NASCAR season on the line 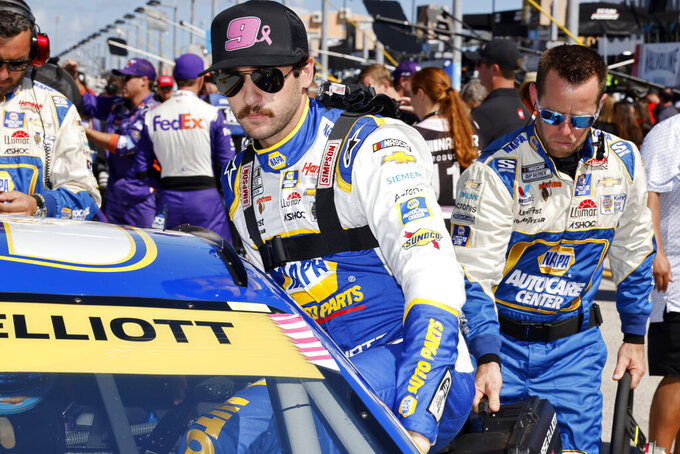 Joey Logano has little stress headed into Martinsville Speedway, where his results won't make a difference in his march toward the NASCAR championship.

The rest of the field?

There are still three spots open in the title-deciding finale and seven drivers head into Sunday's race at NASCAR's smallest and oldest track with a chance. Only 58 points separate Ross Chastain in second from Chase Briscoe in eighth, and a victory can earn a driver an automatic berth into the winner-take-all finale at Phoenix Raceway.

Logano is already locked into the championship race via his victory at Las Vegas two weeks ago. The remaining seven playoff drivers will be fighting for every point possible on a 0.526-mile track that proved in April to be impossible to pass on.

Elliott knows firsthand. He started from the pole at Martinsville in the spring and led 185 laps. But he lost the lead to Hendrick Motorsports teammate William Byron and that was it for Elliott, who finished a perplexing ninth as he stalled out in traffic the rest of the race.

In fact, only four total drivers led laps in the Next Gen car's debut at Martinsville, and Ryan Blaney and Austin Dillon combined to lead a whopping six of the 403 laps. The show belonged to Byron and Elliott, who combined to lead the remaining 397 laps (98.5%). That pushed Hendrick Motorsports to 10,000 laps led at the track in Rick Hendrick's home state of Virginia.

So what does it mean?

Track position is crucial and the Next Gen car, created in part to level the playing field, has left little separation from the front to the back of the grid. The new 18-inch Goodyear tire on the cars has created even more grip, which has alleviated the potential for driver mistakes.

With the chance to race for the Cup championship on the line, drivers are going to have no choice but to be very, very aggressive.

But NASCAR has made it clear over the last three weeks that it is watching closely and won't tolerate any sort of race manipulation or retaliation. Bubba Wallace was suspended for Sunday's race at Homestead-Miami Speedway for deliberately crashing Kyle Larson a week before, and Cole Custer and Stewart-Haas Racing have a Thursday appeal scheduled of their $200,000 fines for allegedly assisting Briscoe's advance into the third round of the playoffs.

Denny Hamlin, co-owner of Wallace's car, wrecked Elliott once at Martinsville to trigger a heated post-race exchange. After the message sent by NASCAR the last several weeks, drivers will have to carefully consider what's acceptable this Sunday.

“They drew a very good line,” Hamlin said of NASCAR. “They did the right thing. Now it’s about can we be more consistent with that for the future? What is the determining factor of crossing that line?”

Blaney, who led five laps at Martinsville in the spring but still thought he had a car capable of winning, sits sixth behind Hamlin below the cutline along with Christopher Bell and Briscoe. Bell and Briscoe both believe they are in must-win situations to advance to the Phoenix finale, but Blaney believes he can qualify on points.

He also knows now he must do it within NASCAR's boundaries.

“I personally think it is good that NASCAR is putting the law down, the hammer down on things that they think are wrong and that they want to act,” Blaney said. “That is the only way you can kind of police it. You have to do those things. At the end of the day, it is their call.

“If they see something that they don’t like, I expect them to act on it, and they have the last couple of weeks. It doesn’t change the approach of the way I do anything. In my mind, you never think about, ‘If I do something malicious with intent, or something like that, that you can get away with it.’”

Martinsville in 2015 was the site of one of the more recent egregious acts of retaliation. Matt Kenseth, feuding for weeks with Logano, returned his wrecked car to the track to intentionally retaliate against Logano — a move that cost Logano a spot in the championship race and earned Kenseth a two-race suspension. Kenseth was the last driver suspended for on-track action before Wallace last week.

With the season on the line for seven drivers come Sunday, it might make for desperate measures in the waning laps.

“Sports tests your morals and tests your character a lot of times,” Logano said. “Sometimes it is tough to balance all that in the heat of the moment. You sometimes make decisions that you’re not proud of later on, but you learn lessons every time. I’ve made mistakes and made dumb decisions inside race cars that I regret. But I’ve learned from every one of them, and I feel like I know where my line is now.”