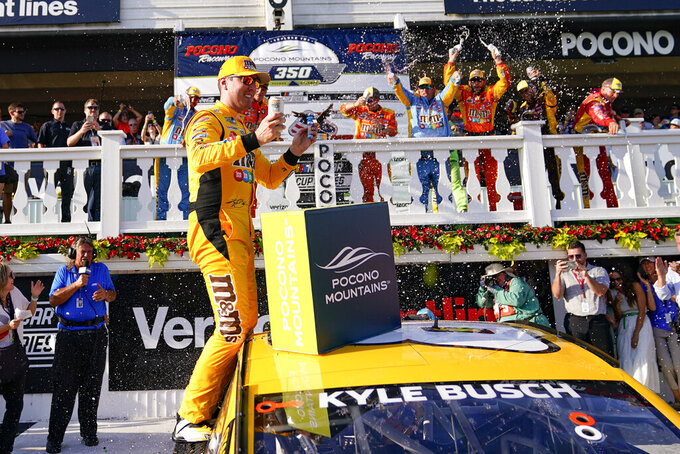 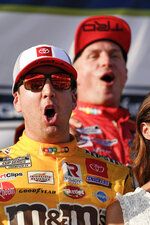 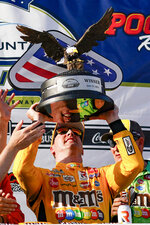 LONG POND, Pa. (AP) — Kyle Busch had a Joe Gibbs Racing team member slide in his Toyota through the window and he tried to figure out how to mend a fried stick shifter welded in fourth gear.

It's rare a NASCAR driver has a passenger in the car, so Busch made small talk on the pit stop with car chief Nate Bellows.

The Toyota never really did get fixed. There were 115 miles to the Pocono finish, Busch had a fried clutch, only one gear and had to rush his car chief out of the car. But he had a full tank of gas, so he hit it.

Busch came through in the clutch — even when he raced without one — and busted Hendrick Motorsports’ winning streak and denied the organization a shot at NASCAR history when he raced to his second victory of the season Sunday.

“Put as much as gas in it as we can, pack that thing full, we're going to run it out the rest of the day,” Busch said.

Busch stretched his fuel in his broken Toyota and outlasted late leaders William Byron and JGR teammate Denny Hamlin as they saw their shot at the checkered flag disappear over the final few laps when they ran out of gas.

Sometimes they're won by a car that could use a push to victory lane.

“We're going down the front straightaway and I'm like, damn, `I wish I could clutch it,'” Busch said. “I didn't have one. I probably could have done a better job saving fuel but I was just lifting off the gas instead of being able to clutch it.”

Busch was on the brink of snapping Hendrick's winning streak with a runner-up finish to Alex Bowman in Saturday's Pocono twinbill opener. He couldn't get the help he needed Saturday with the right push. But he got the critical pit road assist Sunday and then drove the final 46 laps on the 2 1/2-mile oval knowing another stop in the pits would end his race.

“It took some brute force to hold that thing back, to hold it in,” Busch said.

Busch raced without a care early and sang a few bars of “Fly Like An Eagle” over the radio. His 59th career Cup victory will go down as one of Busch's greatest hits. NASCAR's career wins leader in all series has 100 in Xfinity and 61 in Trucks.

Sorry Steve Miller, Busch said his karaoke song of choice is “The Real Slim Shady,” a fitting choice for the M&M's driver.

Kyle Larson, whose blown tire on the last lap cost him a win Saturday, was second for Hendrick Motorsports. Hendrick had won six straight Cup races, capped by Bowman’s third win over his last 10 races.

Hendrick was trying to become the first team since NASCAR’s modern era began in 1972 to win seven straight races.

Bowman started the streak in May at Dover and Chase Elliott followed the next week at Texas. Larson then ripped off three straight points victories at Charlotte, Sonoma and last week at Nashville — and squeezed in the $1 million All-Star race for four wins, total — all while Hendrick Motorsports became the winningest organization in NASCAR history.

Brad Keselowski was third, Kevin Harvick fourth and Bubba Wallace was fifth in his best finish of the season for Michael Jordan’s 23IX team.

The checkered flag went to Busch, in a fortuitous way, thanks to the transmission woes that forced him to pit and top off his tank.

“We would have never been in that position if we didn't have the trans stuck,” Busch said. “We got all we could get out of it with everything that was going on.”

Larson met with 40 students at the Urban Youth Racing School and he announced plans to race in the school’s go-kart race in August in Philadelphia.

The Philly-based program that creates opportunities in racing for minorities developed a deeper relationship with Larson after he was suspended last season for using a slur during an iRacing event. Larson often calls or Zooms with the students and bought the school racing simulators.

“Just having that relationship where they can pick up the phone and call me if they have questions about iRacing or something is pretty neat,” Larson said. “It’s a closer friendship, relationship with them. I think all of them look up to me and I think that’s great to be there for them whenever they need me.”

UYRS founder Anthony Martin said Larson and other NASCAR drivers will compete Aug. 7 in a go-kart grand prix near the school’s location in Philly.

“A lot of our students have never been to a race before, so to actually come see it up close, be a part of it, smell the gas, hear the sounds are very important,” Martin said. “Actually being here is a lot different than seeing it on television.”

NASCAR heads to Road America in rural Wisconsin, one of the new road course events on the 2021 schedule.