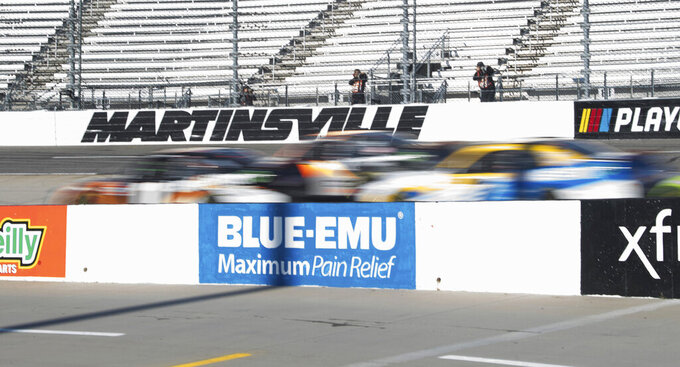 Burton, eliminated from the playoffs in the round of 12, became the youngest winner in Martinsville history at 20 years, 22 days. It broke the mark set by his father, Jeff, in 1990 when he was 23.

“It’s amazing to win here at what is one of my home tracks and do what my dad did," Burton said. "My race team worked their tails off on this car expecting us to have to fight to get into Phoenix to win a championship, and we got knocked out, but we’ve proven people wrong.

"We won two in a row in this round and we’re going to go try to make it three at Phoenix.”

It was Burton's fourth win of the season and, just like last week, spoiled the championship picture.

Burton's back-to-back wins prevented Noah Gragson and Ross Chastain from advancing to next week's Xfinity Series championship race at Phoenix. The title will instead be decided between Chase Briscoe, Austin Cindric, Justin Allgaier and Justin Haley.

The Xfinity Series is crowning its first new champion in three years; Tyler Reddick was promoted to Cup after winning the last two crowns.

Gragson a week ago at Texas was cruising to the checkered flag and an automatic berth in the finale when Burton hurtled past him and snatched the win. It put Gragson in a must-win situation Saturday at Martinsville, where the Xfinity Series raced for the first time since 2006.

But Burton was fairly dominant in his Toyota for Joe Gibbs Racing and wasn't challenged at the end. Allgaier finished second with enough points to advance into the championship race, while Gragson finished third and below the cutline.

Gragson said he thought he would have passed Burton on the final restart if JR Motorsports teammate Allgaier wasn't in second.

“He’s going for a championship in a points and I don’t want to ruin his chances,” Gragson said. “Because he’s a teammate, you don’t want to bulldog your way up there.”

Allgair, who admitted to nerves because of the rowdy Truck Series race Friday night, said he was content to finish second because it was enough to advance him to the finale. He's a two-time Xfinity Series winner at Phoenix, which he believes puts him at an advantage.

“I knew Harrison was going for the win,” Allgaier said. “I knew we just needed to do what we needed to do to get to that final.”