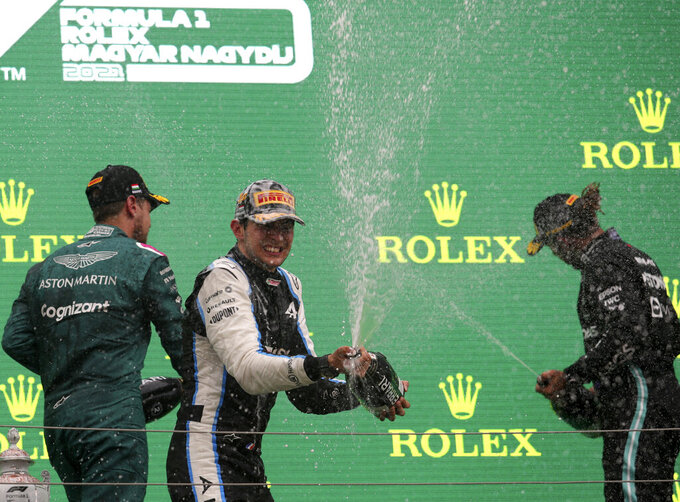 Last year: William Byron won his first career NASCAR Cup Series race in overtime to get into the playoffs.

Fast facts: There is one playoff spot open in Sunday's race. Tyler Reddick can get in with 31 points while Austin Dillon needs help. Both can clinch with an outright win, and the same goes for a host of other drivers. ... Kyle Larson can clinch the regular-season championship with 32 points ... Two teams were fined $10,000 each after postrace inspections found unsecured lug nuts at Michigan: The 23XI Racing Toyota driven by Bubba Wallace and the No. 51 Petty Ware Racing Chevrolet driven by Cody Ware. The No. 42 Chip Ganassi Racing team (Ross Chastain) was also penalized for the Chevrolet losing an axle during the race.

Last race: A.J. Allmendinger outran Brandon Jones in the third overtime to win for the third time this season and the eighth time in his series career.

Fast facts: Four races remain to set the 12-driver field for the playoffs. ... Allmendinger and rookie Ty Gibbs have each won three times, but Allmendinger has done it in 22 starts, Gibbs just 12. ... Allmendinger is 35 points behind leader Austin Cindric. Justin Algaier is third, 150 points back.

Last race: Sheldon Creed won both stages and led 142 of the 163 laps to win the playoff opener at World Wide Technology Raceway at Gateway.

Fast facts: Seven-time series champion Lewis Hamilton leads Max Verstappen by eight points after 11 of 23 scheduled races. ... Verstappen has a series-high five victories and Hamilton has four. Both have eight podium finishes. ... Sergio Perez and Ocon are the only other race winners so far.