NASCAR's Logano has lots of reasons to be smiling right now 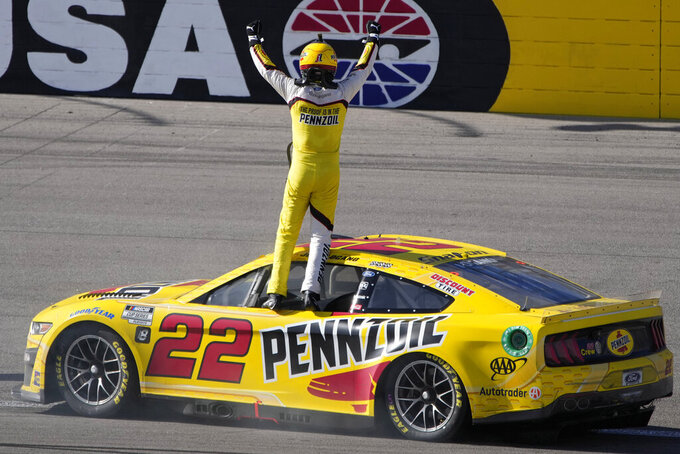 HOMESTEAD, Fla. (AP) — Joey Logano has an omnipresent smile. It’s always there, usually accompanied by him laughing about something. His perpetually upbeat persona has even become a running joke in NASCAR circles over the years.

These days, he’s got even more reasons to be happy.

Logano is essentially taking a 400-mile weekend drive on Sunday at Homestead-Miami Speedway with as little pressure as one can have when behind the wheel of a car that’ll reach a speed around 170 mph. He’s already secured one of the four spots for NASCAR’s winner-take-all playoff finale at Phoenix in two weeks, meaning he can relax, a little anyway.

“We still want to win, there’s still a trophy to grab, we still want to continue to keep the momentum that we have in our race team and we don’t want to lay down on race day,” Logano said Saturday. “I will say that our preparation has been geared more towards Phoenix over the next two races — because we should do that, because that’s the advantage we earned.”

“They just do a great job of getting to where they need to be,” Blaney said of Logano and his group. “Even if they aren’t in the best spot the day before or even at the start of the race, they do a great job of getting better. So, I obviously commend them for that. They’ve really shown strength this year and showed a lot of strength last week and earned themselves a spot in Phoenix. It’d be nice to join them.”

Logano will start 17th in Sunday's race, right in the middle of the pack. He isn’t exactly on vacation over the next two weeks, and has already been part of a ton of meetings to start the process of getting ready for Phoenix.

But he's also been getting some extra sleep in the last few days and spent his Friday night in South Florida at a hockey game between the Florida Panthers and Tampa Bay Lightning. He left after the second period to get some of that coveted sleep and wasn’t aware that the Lightning won 3-2 in overtime.

There’s a few of those in NASCAR right now, too.

Payback talk might be as popular as playoff talk in NASCAR entering this weekend after a season filled with high-profile incidents — most recently, Bubba Wallace getting suspended for Sunday’s race after intentionally wrecking reigning Cup champion Kyle Larson last weekend in a dangerous act of retaliation.

Logano, who won the 2018 Cup Series title, has stayed out of that fray.

“I’m good,” Logano said. “Shoot, no one’s mad at me. We’re in the championship four and I didn’t tick anyone off. How great is this?”

And yes, he was smiling when he said that.