Keselowski ready for NASCAR career as owner, driver in 2022 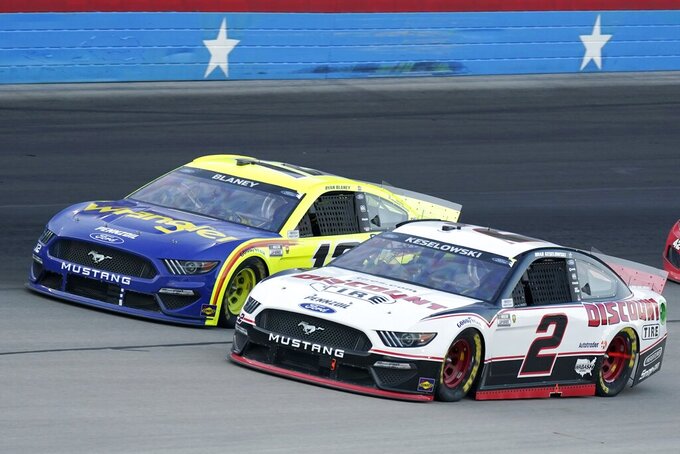 LOUDON, N.H. (AP) — Admitting it was “hard to walk away” from a NASCAR career almost all spent driving for Roger Penske, Brad Keselowski is bullish on a fresh start in 2022 — as a driver and an owner.

Keselowski is set to race for Roush Fenway Racing in 2022 and the team scheduled “a major announcement” Tuesday at the NASCAR Hall of Fame to make the signing official. About 75 miles away from Fenway Park, Keselowski said Sunday at New Hampshire Motor Speedway the time was right to break from Team Penske after nearly 12 years in the No. 2 car, 34 Cup victories and the 2012 championship.

“Certainly everybody has aspirations that where they go to work, things will work out where you could stay forever and continue to grow,” Keselowski said. “Life has other plans. There’s no bitterness about that.”

One sticking point with Penske was Keselowski’s desire to hold an ownership stake in a Cup team. Keselowski fielded his eponymous team in the NASCAR Truck Series for a decade and the desire to have a piece of a team in the elite Cup Series never went away. He’ll get that chance at RFR.

Keselowski had a prolonged contract negotiation a year ago that netted him only a one-year extension and salary cut. Penske said last week he would have extended Keselowski’s contract for two to three years had ownership not been part of the negotiations. Keselowski, a perennial championship contender, has one win this season, 35 in his career and joins a once-proud team that hasn’t won a Cup race since 2017.

Keselowski wants to right the ship on a foundering team long past its championship heyday.

“I think right now there’s a lot of demand out there for proven drivers that can win races and that demand remains,” Keselowski said.

Penske said last week the move was simply “a business decision.” The 37-year-old Keselowski insisted there were no hard feelings.

“He’s been really good to me over the years,” Keselowski said. “Sad to leave that situation. Excited about the path forward.”

His departure led to a shakeup at Penske that will see 2020 Xfinity Series champion Austin Cindric, the 22-year-old son of Team Penske president Tim Cindric, slide into the No. 2 Ford in 2022. Cindric, meanwhile, was to replace Matt DiBenedetto in the No. 21 Ford for Wood Brothers Racing. That seat will now go to Xfinity Series driver Harrison Burton. Wood Brothers and Penske operate as partners.

DiBenedetto, winless in 233 career starts, was crushed he didn't get to keep his ride and posted a nine-minute video on social media where he vented his frustration at losing the 21.

DiBenedetto knew since last year he would lose the seat after the season to Cindric. But the domino effect of Keselowski leaving Penske and Cindric taking the 2 car instead raised DiBenedetto’s expectations that he would keep his ride.

“With Brad obviously leaving, OK, opportunity,” DiBenedetto said Sunday. “I was like, cool, opening there. Let’s go build this team.”

He got the call last week: Take your tools elsewhere.

“Our team was never clicking,” DiBenedetto said. “We worked hard to try and get it there. It just wasn’t. Nobody’s at fault. I’ve got to have a good relationship with my crew chief. It’s all got to click. It just wasn’t there.”

With open seats scarce in 2022, DiBenedetto said he had no bites yet for next season.

“Real nervous,” he said. “This news was hard. Driving for the Wood Brothers is special. They’re family. This timing just works out so horribly wrong. We just finally got our team where it needed to be. It took longer than it should have. I was honest about that. I’ll take some fault for it.”

Team Penske driver Ryan Blaney said Burton and Cindric were coming into the series at the right time with NASCAR set to usher in a new car for 2022.

“It’s probably the best time to be a rookie and come in,” Blaney said. “Everybody’s kind of starting over. I don’t think the learning curve is near as high as a rookie coming in this year and trying to learn these cars. Everyone’s going to be learning the new ones.”