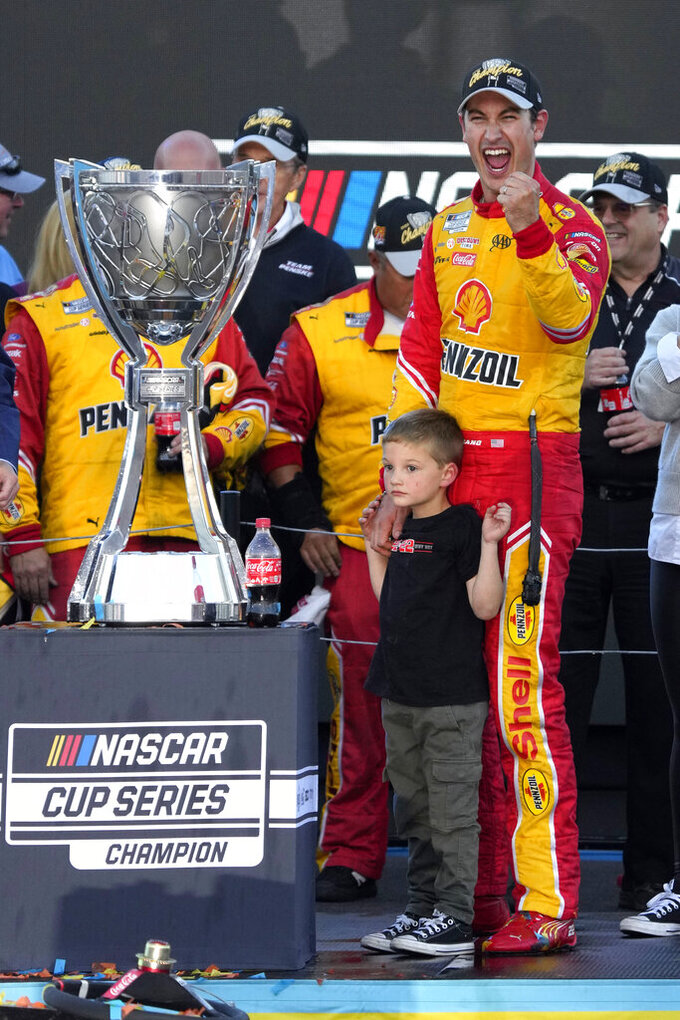 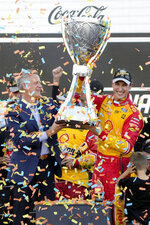 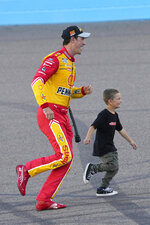 From the first NASCAR race with the new Next Gen car, the Daytona 500, the IndyCar championship and now the NASCAR Cup title, it's been about as close to a perfect season as possible for Roger Penske.

Joey Logano won his second NASCAR championship on Sunday with a victory in the winner-take-all finale at Phoenix Raceway — a win that gave Penske the Cup title and IndyCar title in the same season for the first time in 31 attempts.

“It’s about time,” Penske said. “Joey did a great job, and for us to have two championships in the same year, that’s what we’re here for. That’s the goal we have every year. I think we’ve been close, but we got it this year.”

It was the fourth win of the season for Logano, who opened the year with a January win in an exhibition race at Los Angeles Memorial Coliseum in the debut of the Next Gen car. Less than a month later, rookie teammate Austin Cindric won the Daytona 500 on Penske's 85th birthday.

Will Power added the IndyCar championship to the Team Penske trophy case in September and Logano's dominating run Sunday closed out the banner year for the organization.

“I knew going into this thing that we’re going to win the championship. I told the guys we were the favorite from Daytona, and we truly believed it, and that’s the difference,” Logano said. “I had a good team with a bunch of confidence, and we had all the reason in the world to be confident. I’ve never been truly this ready for a championship race, and yeah, we did it, man. I can’t believe it."

Logano was met after the win by his wife and 4-year-old son, Hudson, the oldest of his three children and only one to make the trip to Phoenix. Logano took Hudson by the hand and ran up the banking to collect the checkered flag.

His son skipped back down the track, waving the flag and holding his champion father's hand. Logano had promised Hudson he'd win the championship.

“We’ve had so many conversations over the last couple weeks before bedtime. First was ‘Daddy is going to get a pole, and he’s going to meet me out here and we’re going to win the race,’ and I couldn’t be a liar to my son,” Logano said.

Logano then drove Hudson inside the No. 22 Ford to the championship stage.

“I always wanted to do that with Hudson. He’s such a little car guy," Logano said.

Logano at 32 was the oldest driver in the championship four, as well as the only one who is married with children. The Next Gen equaled the competition this season and the Cup Series celebrated 19 different winners, including five first-timers and two drivers making their first appearance in the championship race.

Even with the parity, Logano never doubted this would be his season.

“Getting the bookends, the first and the last race, means a lot,” Logano said. “It’s just a really special year for us with our third baby, and 22 in ’22, I told you so!”

It is the third Cup championship for Penske, who won with Brad Keselowski in 2012 and Logano's first title in 2018. Logano joined Kyle Busch as the only active drivers with multiple Cup titles.

Logano won the pole and was never really challenged on Sunday as his Ford led 186 of the 312 laps, and he was not the highest running title contender for only one lap. He's the first Ford driver to win two Cup titles since David Pearson in 1968 and 1969.

It is the second Cup championship for crew chief Paul Wolfe, who won with Keselowski in 2012 and admitted to texting rival Ford crew chief Rodney Childers for strategy advice during the race.

“I was texting him throughout the race, ‘What are you guys thinking? What would you do?’” Wolfe said. “I have thoughts, but all the other crew chiefs might think something different. It’s good to have another perspective. There’s guys in the garage you can trust and there’s guys you can’t. I think Rodney and I have a great relationship, and I appreciate that.”

Ross Chastain finished third in his championship race debut, and Christopher Bell was 10th in his debut. Bell raced hours after Joe Gibbs Racing learned vice chairman Coy Gibbs, son of the Hall of Fame team owner, died in his sleep at 49.

“You wake up this morning and you're racing for a championship, you're happy, you're elated, and then your world comes crashing down," Bell said. “Whenever you get news like that, it definitely puts it in perspective that there's much more to this outside of racing.”

Chase Elliott was spun by Chastain early in the final stage, his Chevrolet hit the wall and he was immediately out of contention. It snapped Hendrick Motorsports streak of two consecutive Cup titles.

NASCAR's most popular driver won a career-high five races this year and the regular-season championship, but Elliott lost his shot at a second championship when he cut across the front of Chastain and Chastain refused to lift. The contact sent Elliott spinning into the wall, he dropped to 30th and down a lap during the repairs, and finished 28th.

“I feel like it was just hard racing and I had position," Chastain said. “I got to the left of (Elliott) and saw an erratic move that he made to turn left to cover it, but I was already there. It’s not how I want to race them or those guys.”

Logano, who started his career with JGR and spent five seasons there before he was fired after the 2012 season, gave his regards to the Gibbs family after the win.

“I don’t know what to think, but obviously my condolences go to the Gibbs family,” Logano said. “But just an incredible day for us, and kind of mixed emotions at the moment.”