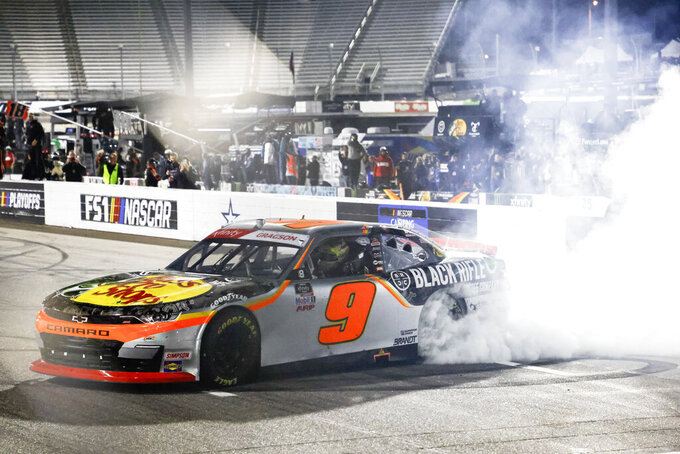 MARTINSVILLE, Va. (AP) — Noah Gragson said he'd win at Martinsville Speedway to earn a spot in the Xfinity Series championship and did just that Saturday night in NASCAR's most compelling title race.

Gragson, the confident 23-year-old from Las Vegas, had to win at Martinsville to make the winner-take-all Xfinity finale and did it in two overtimes before joining the crowd in celebration. He chugged a beer handed to him through the Martinsville fence by a spectator as he prodded the fans for more cheers.

“We’re going to the Final Four, baby!” Grangson screamed into the television camera after rambling through his post-win emotions.

Gragson beat Austin Cindric in a drag race to join the reigning champion in the Xfinity Series title race. He then burned the tires off his Chevrolet in victory celebration, and led his JRM crew as they climbed a spectator fence.

Gragson stood atop the wall along the grandstands and accepted the beer, egged on the crowd for more enthusiasm, then chugged the beer and tossed the can back toward the crowd.

Breathless after, Gragson was emotional in showing part of what has made the Xfinity Series championship race more entertaining than the Cup and Truck Series. Kyle Larson is the heavy favorite to win the Cup championship, and nobody knows what could happen in the trucks after favorite and dominant driver John Hunter Nemecheck seemed to be deliberately wrecked by non-playoff driver Austin Wayne Self.

Nemechek still advanced, but drivers up and down the grid complained about lousy on-track etiquette and amateur racing.

In the Xfinity Series, the third round of the playoffs had been a wildcard with all four slots open at Martinsville. AJ Allmendinger, Cindric clinched on points at the end of the second stage and Daniel Hemric was the fourth driver to qualify with Gragson for the final.

Justin Haley was eliminated with a brake fire then Gragson, who said he'd do anything to win, spun leader Ty Gibbs to take control of the race. Title contender Harrison Burton was eliminated when he couldn't avoid hitting Gibbs' stalled car.

But Hemric wasn't done and took the lead from Gragson with 19 laps to go. Hemric was strong enough to pull away toward the first win of his career — but a caution with six laps remaining sent the race to overtime.

Hemric picked his starting lane as the leader and chose the bottom line. Gragson said he wanted to be on the front row, too.

They were side-by-side and Gragson timed his move perfectly to clear ahead of Hemric and claim the lead.

Another caution set up a second overtime and Gragson this time took the inside lane as the leader. But instead of taking the outside line alongside the leader, Hemrick chose to start in the second row behind Gragson. The decision failed when Gragson drove away to the win.