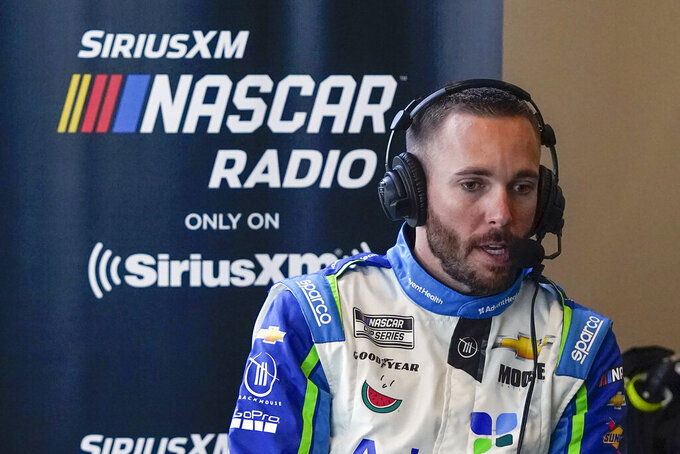 CHARLOTTE, N.C. (AP) — One quick glance at the statistics fails to accurately show the most improved NASCAR team through the first month of competition.

Neither driver has won a race. One is ranked 14th in the standings, the other 22nd.

Chastain two races ago led 83 laps — more laps led than in all 117 of his previous career starts — and he has finished third and second in his last two outings. Suarez was fourth at California and ninth last Sunday at Phoenix, and the Mexican driver has never felt more comfortable with a team than he does now.

“We are no underdog,” Chastain said. “We don’t have the legacy of winning and it’s a big deal right now. We win a stage, and we’re proud of that. I think the plan is, and the preparation we’re putting in, is to get to a point where it's just ‘Yep, OK, we won another stage but did we win the race?’ I know walking around the shop, we don’t feel like we’re lacking anything."

Trackhouse was started ahead of the 2021 season by former driver Marks, who hired Suarez with a business model to tap into the Mexican spending market and Suarez' rabid fanbase of “Daniel's Amigos." Marks brought in entertainer Pitbull for both cache and more crossover appeal to the Hispanic motorsports audience.

The first season was fine — nothing really special — but Suarez finally felt like he'd found a home.

Suarez won the Xfinity Series championship in 2016 driving for Joe Gibbs Racing and received an unplanned promotion to Cup when Carl Edwards abruptly retired at the end of that season. Suarez lasted two seasons with Gibbs before the team cleared him out to sign a bigger name; the same thing happened in 2019 when Stewart-Haas Racing dumped Suarez after one season and a near-miss of the playoffs.

Then came 2020 when Suarez signed with startup Gaunt Brothers Racing. The team failed to make the Daytona 500 and it was downhill from there — Suarez finished 31st in the final standings with a best season finish of 18th.

“Then 2020 was probably one of the most difficult years of my life and career. Then I slowly started to go where I wanted to go,” he added. “You know with Trackhouse Racing being competitive again, it definitely feels good.”

Suarez stressed the turnaround was not overnight, and same for Chastain, an eighth-generation watermelon farmer from Florida who has constantly sought a big break.

Suarez believed that they could build a competitive team with crew chief Travis Mack and engineer Jose Blasco-Figueroa.

“Do I think I had everything filled in the beginning of last year when I joined Trackhouse? The honest truth is no. Do I think that Trackhouse was going to give me the tools to find everything that I needed? Yes,” Suarez said. “I honestly think that the team that I have right now is probably the best team I ever had in Cup. I’m talking about everything. Engineers, crew chiefs, pit crew, like complete team.”

Chastain was first noticed washing a motorhome by the CEO of a potential sponsor so enamored by Chastain's work ethic that he pledged to sponsor a full Xfinity Series schedule for the driver with Chip Ganassi Racing. If it seemed too good to be true, it's because it was.

DC Solar was raided by the FBI before Chastain even got his start and he instead bounced around with Kaulig Racing in the Xfinity Series and a handful of different Cup teams. Ganassi in 2021 at last gave Chastain his Cup promotion and the team liked him and was including him in future plans until Marks came calling.

Unable to purchase the charters he needed to ensure a spot in the field each week, Marks called Ganassi and asked the owner about selling his team. It was an offer Ganassi couldn't refuse and Trackhouse swallowed a bulk of existing Ganassi employees, added Chastain in a second Chevrolet and moved into the Ganassi shop last November.

As Chastain finds his rhythm with Trackhouse, he's thriving with many of his former Ganassi crew members. But it is the leadership of Marks that has stood out to Chastain, who received job security with a contract extension and special attention from pit-crew coach Mike Metcalf, who gifted Chastain the self-help book, “It Takes What It Takes: How to Think Neutrally and Gain Control of Your Life."

The book has taught Chastain how to manage the ups and downs of his life, a race weekend and his new team.

“It’s unlike anything I’ve ever seen to where what Justin has brought in and the mentality in the shop,” Chastain says. “It’s the people, that’s the biggest thing. And it’s the same people, so I don’t know if this makes sense, but I’m telling you, there’s a change in the culture here and how Justin has infused this building and motivated people is different. And I’ve never seen a shift in attitude like I have this year. Like I said, fast cars definitely help that, but it’s been a game changer.”