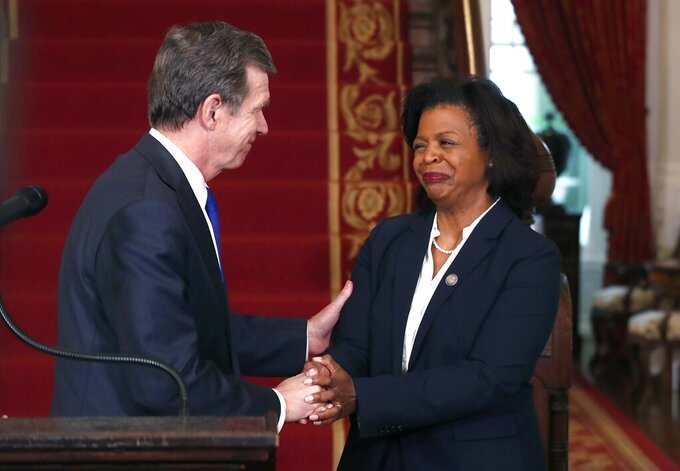 North Carolina Gov. Roy Cooper, left, congratulates Cheri Beasley after naming her as the next Chief Justice of the NC Supreme Court during a news conference at the Executive Mansion in Raleigh, N.C., Feb. 12, 2019. Gov. Cooper gave Beasley his full-throated endorsement for the U.S. Senate on Wednesday, Jan. 12, 2022 attempting to secure a smoother path for her to become the Democrats' nominee to wrest a seat held by a Republican since 2005. (Ethan Hyman/The News & Observer via AP, file)

The campaign of Beasley, the former state Supreme Court chief justice, raised more than $2.1 million for the three months ending Dec. 31, and had $2.8 million in the bank entering the new year, according to her campaign report. She and other Senate candidates filed their reports with the Federal Election Commission before a late Monday deadline.

Among Republican nominee hopefuls, U.S. Rep. Ted Budd raised more than former Gov. Pat McCrory in the fourth quarter, according to the candidates and FEC filings. Budd's campaign said it raised over $968,000, while McCrory's campaign reported $748,000.

Both campaigns had comparable amounts in the bank entering January, with Budd reporting $2.2 million in cash compared to $1.95 million for McCrory.

The two campaigns had collected nearly identical totals of about $1 million in the third quarter, while McCrory had outraised him during the previous three months. Budd, the favored candidate of former President Donald Trump, is also benefiting from an outside group's intense support.

GOP newcomer candidate Marjorie Eastman of Cary made a solid showing in her first filing, raising over $423,000 in the fourth quarter, according to her campaign filing. She had about $287,000 on hand to begin 2022.

Former U.S. Rep Mark Walker, who announced last week he was staying in the race after weighing a switch to another House bid, reported raising $146,000 in the fourth quarter and had $572,000 in the bank.

They're all running to succeed retiring Republican Sen. Richard Burr.

Beasley's campaign emphasized Monday how she's led fundraising among announced candidates for the past three quarters.

Campaign manager Travis Brimm said in a release that more people know “she is the only candidate in this race who will be an independent voice that fights for North Carolina in the Senate.”

Combined with Democratic Gov. Roy Cooper's endorsement a few weeks ago, Beasley sits as the heavy favorite to win the party's nomination in the primary currently set for May 17. Clearing the field also allows her campaign to put money away that can be used in what's expected to be a grueling and expensive general election race.

The statewide primary already was delayed from March to mid-May while state redistricting lawsuits are resolved. It's possible the primary could be pushed back even later should district boundaries have to be redrawn.

Budd gained Trump's endorsement last June and has made it a key element of his campaign so far.

“NASCAR is starting again in just a few weeks, and I’ve got what every NASCAR driver wants, all the momentum and a clear path to Victory Lane," Budd said in a news release citing his fundraising lead in the GOP race.

Washington-based Club for Growth Action super PAC reported last week it has spent over $4.3 million in the Senate race on TV and other advertising supporting Budd and opposing McCrory.

In a news release, McCrory made a thinly veiled reference to Club for Growth Action, calling it a “D.C. special interest group who’ve bought and paid for one of my GOP opponents." McCrory focused on the $3 million that his own campaign raised in 2021.

“It’s obvious that we’re the only candidate who can maintain the support necessary to win this race,” McCrory said.

A pro-McCrory independent expenditure group called Carolina Senate Fund, with its address listed in suburban Washington, raised $581,000 through December and spent $89,000 so far on anti-Budd materials.

Eastman, a combat veteran, is benefiting from Restore Common Sense Inc. , a super PAC linked to a Wilmington pharmaceutical executive. The committee has reported spending $1.2 million on pro-Eastman digital media, billboards and radio ads by mid-January. Independent expenditure groups aren't permitted to coordinate activities with candidates or their committees.

Jackson, who announced his departure from the Democratic race in mid-December, still reported raising $470,000 for the fourth quarter and had $831,000 in cash on hand.