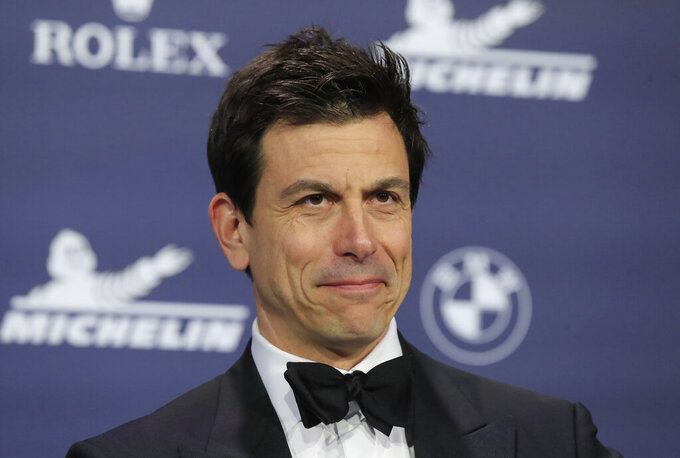 Mercedes team principal Toto Wolff is “optimistic” that new steps put in place to improve Formula One race management will prove successful, though he remains unhappy about how Lewis Hamilton lost the title last season.

Wolff spoke at the launch of the Mercedes W13 car on Friday, a day after Michael Masi was replaced as F1’s race director following the late controversy surrounding the title-deciding Abu Dhabi Grand Prix in December.

“Literally in half a minute of decision-making process (we lost the title). But we also have to move on from that," Wolff said. "We’re not going to forget it, because that’s simply not possible, but we need to look at 2022. I believe that the right steps have been taken and I'm optimistic about the changes that have been implemented.

“The last couple of years we have seen a little bit of freestyle in the interpretation of the regulations," he added. "So yes, I’m happy with what’s been implemented.”

The structural changes include a new soccer-style Virtual Race Control Room, while unlapping procedures behind safety cars will be reassessed before the first race in Bahrain on March 20.

“Certainly the role of the race director is not easy, and now we have two very experienced guys out there,” Wolff said. “The support structure (is) not only in the race directors’ room but also with a remote-control room, where the race directors can rely on feedback and input to make the decision-making process easier for them.”

But there will be no more direct communications with the race director like in the pressure cooker of Abu Dhabi, where Wolff and Red Bull team director Christian Horner were able to talk to Masi while he was weighing his decision in a televised sequence that seemed more like cinema than sport.

The world title hinged on a key decision from Masi, prompting deep confusion and seething vitriol in some quarters — with the FIA saying the sport’s image had been tarnished.

Hamilton complained at the time that it was a “manipulated” outcome, but Wolff on Friday swatted aside any suggestion of foul play.

“Nothing is fixed, I think it was ... what’s the right word? ... It was just circumstances and decisions that were unprecedented, and how they came about — certainly for us — was a shock," he said. “Three laps to the end we got a message saying that the cars were not allowed to unlap themselves. Three minutes later suddenly there are certainly two messages that come out of nowhere.”

Verstappen restarted second behind Hamilton and, on quicker new tires, the Dutchman zoomed past him in the fifth turn.

Mercedes lost both its protests that night over how the race ended and then dropped its appeal.

Wolff said there were no demands made from Mercedes to the FIA that Masi should leave, amid speculation Hamilton would have walked away from F1 if Masi had stayed in his role.

“Us dropping the appeal (being) linked to anyone leaving the FIA is not true, I don’t know where that comes from," Wolff said. “Last year was a great season, but it created a lot of polarization with decisions that were not always easy to understand."

Hamilton had been utterly dejected at the way he missed out on a record eighth F1 title to move ahead of fellow great Michael Schumacher.

He took himself off his social media platforms and only just recently returned to them. Friday's launch was the first time Hamilton had spoken publicly since Abu Dhabi.

“What he did was absolutely right, to take himself out of the microcosm of Formula One,” Wolff said. “He has come back in a great mindset, he is positive, determined and yet again adversity that was thrown at him will make him stronger.”

Hamilton, who has an F1-leading 103 wins and 103 pole positions, will now look to write more lines in the record books.

Wolff added with a smile: “It's attack mode.”