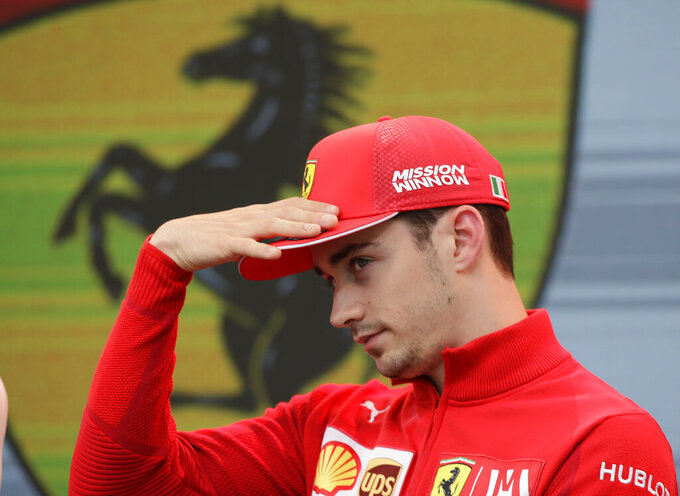 Ferrari driver Charles Leclerc of Monaco gestures during an autographs session at the Monaco racetrack, in Monaco, Friday, May 24, 2019. The Formula one race will be held on Sunday. (AP Photo/Luca Bruno)

MONACO (AP) — Sebastian Vettel's barren spell with Ferrari stretches to a dismal 13 Formula One races without a win, dating back to the Belgian Grand Prix last August.

The veteran driver still holds No. 1 status at Ferrari mainly because of his experience. At times this season he has been slower than Charles Leclerc, his young and highly-motivated colleague keen to make an impression in his first season with the team.

When asked if Vettel's performances had fallen below expectations for a four-time world champion, team boss Mattia Binotto defended him and said the problems were not down to the 31-year-old German.

"First we need a good car ... which is performing sufficiently well to win," Binotto said. "It may be frustrating for him, no doubt. But first it's our duty to give him (one) that he can perform well (in)."

The car is apparently not an issue Ferrari had anticipated. After strong performances in pre-season testing, it was touted as the team to beat, and even five-time champion Lewis Hamilton — winner of the past two championships — said so.

But Hamilton and Mercedes teammate Valtteri Bottas have won all five races this season while Ferrari has a measly three podium places. The team's last win was by Kimi Raikkonen at the United States GP last October, two months after Vettel's victory in Spa.

While Mercedes is all about smooth running, Ferrari's car is blighted by a front suspension issue, a deficit in cornering speed and such basic trouble as getting enough heat into the tires quickly enough.

Ferrari's passionate tifosi fans, who are waiting for a first drivers' title since Raikkonen in 2007, are not happy with the current standings. Vettel is fourth, nearly 50 points behind championship leader Hamilton, while Leclerc is fifth.

"After winter testing our confidence in the performance was higher than today," Binotto said with an air of resignation. "There are a lot of points to recover."

Binotto has been with Ferrari a long time and was promoted from chief technical officer to team principal in January.

He took over the role from Maurizio Arrivabene after two frustrating years in which Ferrari blew the title race, due to a bizarre combination of panicky errors from Vettel and a string of baffling strategical and technical mistakes within the team.

Now there are worrying echoes of 2016 — when Ferrari failed to win a single race and Mercedes crushed its rivals.

Although he is vastly experienced in terms of engineering and technical development, Binotto has not been in such a leadership role before — one in which the public explanations fall to him.

"Certainly we are lacking some performance compared to our main competitors ... there is much to do," he said. "There are races where we can still be strong. We will fight day by day, race by race."

But this sounds more hopeful than convincing and it is hardly the fighting talk observers expect from Ferrari — the most famous name in F1.

The Prancing Horse, as it is known among fans, has won a combined 31 drivers' and constructors' championships. Seven-time champion Michael Schumacher won five of his titles with Ferrari, from 2000-04.

Expectations of a win at Sunday's Monaco GP are understandably low, especially after a disappointing second practice on Thursday when both Ferrari drivers struggled with tire issues and were around one second behind Hamilton's best time.

Because the 3.3-kilometer (2-mile) track is a notoriously difficult overtaking circuit, getting pole position on Saturday often proves crucial in deciding the race's outcome.

"Realistically (it) is going to be very difficult," said Leclerc, who took the team's only pole this year at the Bahrain GP in March.