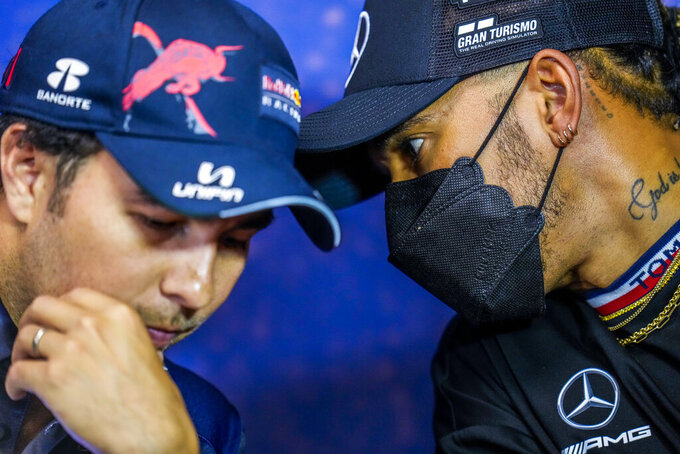 Mercedes driver Lewis Hamilton of Britain, right, talks with Red Bull driver Sergio Perez of Mexico during a press conference ahead of the French Formula One Grand Prix at the Paul Ricard racetrack in Le Castellet, southern France, Thursday, July 21, 2022. The French Grand Prix will be held on Sunday. (AP Photo/Manu Fernandez)

PARIS (AP) — Sergio Perez called for lifetime bans for abusive fans at Formula One races and seven-time champion Lewis Hamilton urged the community to band together to stamp out the boorish behavior spotlighted at recent events.

Drivers were shocked at the Austrian Grand Prix two weeks ago when fans used social media to make F1 aware of rampant harassment, sexism, racism, and homophobia in the grandstands of the Red Bull Ring. F1 condemned the behavior hours before the start of the race and said it had discussed the problems with the race promoter; F1's statement did not offer fans a mechanism to report problems during the race.

As the series shifted to the French Grand Prix, Perez and Hamilton were among the many drivers Thursday who insisted the poor behavior must be firmly addressed.

“Those fans don’t represent us as a sport, they don’t share our values and they’re not welcome here. As simple as that," said Perez of Red Bull. “We should hopefully ban them for life, don’t welcome them again. I think a few fans shouldn’t even be allowed to embarrass our sport like that."

Hamilton, who was jeered when he crashed his Mercedes during a practice in Austria, said F1 CEO Stefano Domenicali is working on a solution.

“We need to do more. I know Formula One and Stefano are really focused on doing more, and definitely taking it serious especially after the last race," said Hamilton, who added the entire industry must do its part.

“Not only us, the sport, but (media) that are coming that write and report what is happening here. Your words are powerful and you have a responsibility also to the readers.”

F1 should “continue to take a stand” against such behavior, Hamilton added, and noted soccer has taken proactive measures. Soccer tries to combat crowd abuse by broadcasting anti-discrimination messages before matches.

“I think football has done some positive things, in terms of the announcements they made before,” Hamilton said. “Every team, every company here, can do more. There must be 1,000 partners within the F1 organization, or hundreds maybe, and it’s about accountability with all those.”

French driver Pierre Gasly agreed on life bans for those caught abusing others.

“What we saw last weekend is sad and I don’t think it represents the core value of our sport and the true fans,” Gasly said. “There should be accountability for such abuses. I think this goes back to education. It’s not like it’s happening every weekend, but these abuses should never happen on track and if you behave like that you should be banned.”

Four-time F1 champion Sebastian Vettel praised those who reported the abuse, which he believes has been prevalent for years but now brought to light by a social-media savvy younger fan base.

“I think there has been a shift in fan base. I think we can all see the excitement for Formula One, a younger audience on average coming to the track,” Vettel said. “I think the abuse has probably always been there. I don't think at any time it is correct, but I think maybe you are starting to see a generation that actually stands up about it and makes a noise, and uses different platforms to communicate. It's great to see people are having the courage to speak up."

When asked if he thought the level of hostility could escalate, Vettel said it's more a case of it coming to light more.

“I think the truth, unfortunately, is that probably it has been going for on a long time at all major sports events or big events,” the German driver said. “It’s more than about time that these things are changing, because there’s just no space for such things.”

Fans in Austria cheered Hamilton's crash at the Red Bull Ring in Spielberg — where sections of world champion Max Verstappen's devoted “Orange Army” have their own grandstand. One week earlier, Verstappen and his Red Bull boss Christian Horner were booed by a pro-Hamilton crowd at Silverstone during the British GP.

Mick Schumacher and Fernando Alonso are 17 years apart and from different generations. But they agree on this: social media companies must do far better to eradicate the spread of abuse online that then swirls back at sporting events, and elsewhere.

“All kinds of abuses are not welcome. I think it’s not only us but also social media platforms that have to control that better, so there’s no space for that," the 23-year-old Schumacher said. “Address is at soon as it happened. This is something which should be unacceptable anywhere, not only in our sport, but in society.

"We’re in 2022 and we still have those issues, so it’s definitely concerning."

“This is a very good point (about) social media," he said. "It’s not just drivers, promoters or teams, it’s between everyone to make this sport a better place.”

Aggressive fan behavior should not be so prevalent at the Paul Ricard circuit at Le Castellet in southeastern France. The track is not a hotbed for fans of either Verstappen or Hamilton. But the Hungarian GP follows France, and last year Hamilton was jeered at the Hungaroring following a dramatic first-lap crash with Verstappen at Silverstone.

There is a midseason break following Hungary and the season resumes in Belgium and the Netherlands, races packed with Orange Army fans.