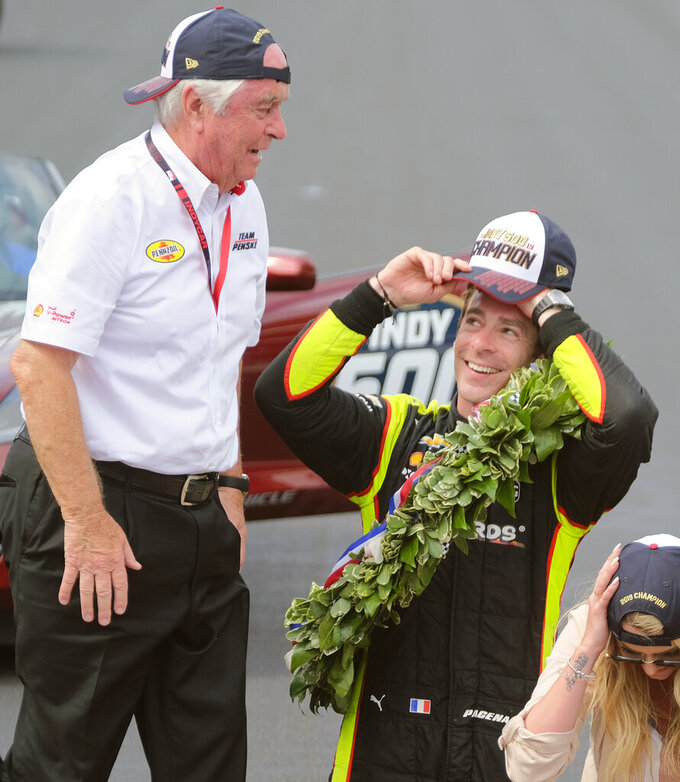 Simon Pagenaud, of France, talks with car owner Roger Penske as they celebrate on the Yard of Bricks after Pagenaud won the Indianapolis 500 IndyCar auto race at Indianapolis Motor Speedway, Sunday, May 26, 2019, in Indianapolis. (AP Photo/AJ Mast)

INDIANAPOLIS (AP) — Roger Penske celebrated his 50th anniversary in the Indianapolis 500 with his 18th victory.

Along for the ride was sponsor John Menard, like Penske celebrating nearly a lifetime of annual trips to the fabled race. Unlike his old friend, he has had little success in the one event everyone wants to win.

Menard finally reached victory lane Sunday with Penske and Simon Pagenaud, their car sponsored by his Midwest-based home improvement chain. Pagenaud held off Alexander Rossi in a frantic shootout that included five swaps of the lead in the final 13 laps.

Menard was breathless watching the action and overwhelmed when it was over.

"You ever watch that movie called 'The Candidate,' when that guy works and works and works and finally gets elected?" Menard asked. "After the election, he won, and he gazed into the mirror and says, 'What the hell do I do now?' That's the way I feel. We'll go try to win another one."

Menard was serious. He hopped on a plane and headed to Charlotte Motor Speedway to watch his son, Paul, race in NASCAR's Coca-Cola 600. He sponsors his son's car, and that actually got the elder Menard his first Indianapolis Motor Speedway victory when Paul won the Brickyard 400 in 2011.

As much as Penske loves Indianapolis, Menard also adores the place. His first trip was in 1979. He had a sign to hang over a garage — but no idea where the garage was at the sprawling speedway.

"I didn't know enough to go there on 16th (Street) and drive under, so this guy at the gate in a yellow shirt was standing there, and he goes, 'Where are you going with that sign?' And I said, 'I want to get in the garage area.' So he said, 'I'll open the gate for you.' So he unlocked the gate and let me in. I didn't have a credential. I didn't know where I was going.

"I said, 'Which way is the garage area?' I think he thought I was crazy, but we had a good time. That was the first time I was here, 40 years ago. Been trying ever since. I see a stubborn, stupid guy."

Pagenaud made it all worth the wait.

He arrived at the speedway this month with his job on the line and rumors swirling that Alexander Rossi could soon replace him at Team Penske. But the Frenchman is leaving with a pair of wins, his face soon to be engraved on the Borg-Warner trophy as the Indy 500 champion and with an assurance from Penske himself that he isn't going anywhere.

In a head-to-head duel for the ages, Pagenaud defeated none other than Rossi with a dramatic pass on the penultimate lap and held on. Even sweeter, the win came the 50th anniversary of Penske's arrival at the Brickyard.

Pagenaud was dominant all day, leading 116 of the 200 laps, and the win was cathartic. He stopped his car at the start-finish line and hopped out to share his first Indy 500 win with his fans. And once he finally made his way to victory lane, Pagenaud climbed from his car and let out a primal scream, then dumped the entire bottle of celebratory milk over his head.

Pagenaud was in a Chevrolet, and the bowtie brand was the dominant engine all May. It swept the top four spots in qualifying, won the race and took four of the top six spots. Pagenaud is the first Frenchman to win the Indy 500 since Rene Thomas in 1914. He was the 21st winner form the pole and first since Helio Castroneves a decade ago.