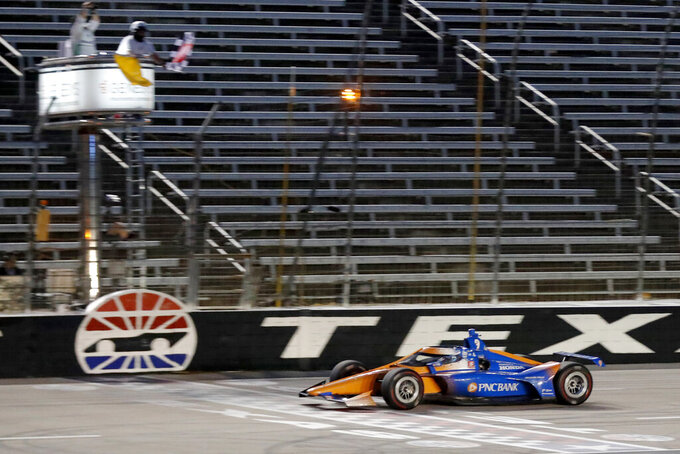 FORT WORTH, Texas (AP) — Texas Motor Speedway plans to open its massive grandstands to thousands of fans for a rescheduled NASCAR Cup Series race next month.

Gov. Greg Abbott on Friday approved a plan submitted by the track to allow spectators for for the race on July 19. The governor had previously said that outdoor sporting events could be held with 50% capacity.

Track President Eddie Gossage said it was still too early to know how many fans would be able to attend the race at the 1 1/2-mile track that has a capacity of about 135,000, including suites and the grandstands that stretch about 2/3 of a mile from end to end.

“We don't know, because it depends," Gossage said.

With social distancing protocols in place, the speedway first has to reassign seating for people who had already purchased tickets for the race that was originally scheduled for March 29 before NASCAR paused its season due to the coronavirus. Gossage described that process as like doing a jigsaw puzzle. There are already 25,000-30,000 tickets out for the race, though fans can still request credit for future tickets or refunds.

“If everybody responds and wants to be seated two by two, that requires a lot more empty seats between them. If it’s groups of fours and sixes and eights, and things like that, then it's a little denser," he said. “So I don’t know how many it will be. And we’re not focused on any number. We’re just wanting to seat everybody properly, socially distanced apart so that everybody is safe and has a good time.”

There were no fans when IndyCar opened its delayed season at Texas two weeks ago in what initially was supposed to be the midpoint of a 17-race season for the open-wheel series. No spectators will be allowed at the NASCAR Xfinity and Truck Series races at Texas the day before the Cup race.

NASCAR is set to allow up to 30,000 fans at Bristol for its All-Star race four days before the Cup race in Texas. A recent spike in COVID-19 cases in North Carolina sparked the move of that race from Charlotte Motor Speedway.

About 1,000 fans, mostly military personnel, were allowed for the Cup race last weekend at Homestead-Miami Speedway. About 5,000 fans are expected Sunday at Talladega Superspeedway in Alabama.

The announcement about fans in Texas comes as the state continues to see rising numbers of new coronavirus cases and hospitalizations since Memorial Day. A record 3,148 COVID-19 hospitalizations were reported in Texas on Friday, more than double the number in hospitals over the holiday weekend. The reported 3,454 new cases were down slightly from the single-day record 3,516 set Thursday.

"Texans are eager for sporting and entertainment events to return, and this is a great step towards that goal,” Abbott said. “As we continue to open Texas, it is essential that we do so in a way that keeps Texans safe and limits the spread of COVID-19. Texas Motor Speedway has put a tremendous amount of work, time, and energy into ensuring that this race meets all the necessary safety and health standards, and I applaud them for this effort.”

Along with social distancing in the grandstands and concession lines, there will be enhanced cleaning and sanitation in high-touch, high-traffic public areas and more hand sanitizer stations. Masks will be encouraged. While there will be no fans or camping on the infield, camping will be allowed outside the track. Fans won't be allowed to bring their coolers inside.

The track is going to 100% digital ticketing for the first time since it opened in 1997, and won’t be selling tickets on race day. All purchases, such as concessions and merchandise, will be cashless transactions.

Gossage said the track is following the guidance of the state, adding that the size of the speedway and being outdoors provides “a whole lot of space there for a lot of people to safely do this.”