Leclerc shows why he has potential to challenge for F1 title 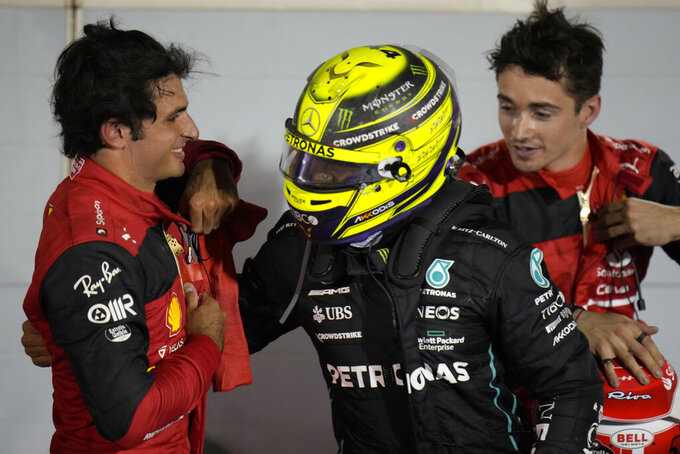 It took three laps for Ferrari driver Charles Leclerc to show why he is a potential Formula One title contender, heading into this weekend's Saudi Arabian Grand Prix.

Sure, the slick driver from Monaco won the season-opener in Bahrain last Sunday in style: from pole position and with the fastest lap.

But what really stood out was the way he went toe-to-toe with world champion Max Verstappen — his former teen rival from their karting days — and came out on top.

Verstappen overtook him three times on Laps 17-19, only for Leclerc to show poise, control and aggression to win his place back on each occasion.

There wasn't a hint of panic, despite who he was up against. Leclerc now tops the driver standings on 26 points, with teammate Carlos Sainz Jr. second on 18.

“We are in the mix to fight for the title, it’s amazing,” Leclerc said. "We are both very happy to have a car capable of winning. And we will fight for it for sure.”

Ferrari hadn't won a race since Leclerc's victory on the Italian manufacturer's home track in Monza in 2019, the year he led F1 for pole positions 7-5 ahead of Hamilton.

Leclerc was eighth overall, Sebastian Vettel was 13th, and proud Ferrari was sixth in the constructors' championship — trailing Mercedes by 442 points.

“They are still the favorites,” he said.

Yet Verstappen already has 26 points to make up on Leclerc.

Last weekend's late-race meltdown in Bahrain saw Red Bull score zero. Verstappen and Sergio Perez where in second and fourth place nearing the end but retired because of a fuel pump issue.

The season wasn't meant to start this way, with Verstappen fastest in pre-season testing.

He was clearly irritated in Bahrain, making his frustrations known on race radio — especially annoyed at being told to hold back his outlaps when he felt he could have got ahead of Leclerc.

Verstappen was more diplomatic heading into the Saudi race this Sunday, which will again be under floodlights.

“Last weekend was a tough one for all of us to take,” he said. “We win and lose as a team and we’ll come back stronger.”

The 6.18-kilometer (3.83-mile) Jeddah Corniche Circuit is hosting F1 for only the second time, a few months after the penultimate race of last season.

With Mercedes sluggish, it could be another shootout in qualifying between Ferrari and Red Bull. Like last Saturday, when Leclerc edged Verstappen for his 10th career pole.

“It’s a really quick track with high-speed straights,” Verstappen said. "I’m really looking forward to it ... it should be enjoyable.”

Perhaps not for Mercedes.

It has been struggling with weight and an aerodynamic issue called “porpoising,” which causes the racing cars to hop and bounce.

“We were clearly third quickest behind Ferrari and Red Bull (in Bahrain)," Mercedes team principal Toto Wolff said. “If you look at the pecking order today it seems a long shot to even be in contention.”

While Red Bull was undone by a reliability issue, it certainly did not lack speed. The circuit here could prove problematic for Mercedes.

“With a new car and new tires that we’re still learning how to get the most from, it will be a steep learning curve,” Wolff said.

McLaren has struggled with a similar problem. The team had a strong 2021 with five podium finishes, including a win, but in Bahrain Daniel Ricciardo finished 14th and Lando Norris was 15th.

“We just don’t really have a good enough car at the minute,” Norris said.

F1 races in Saudi Arabia two weeks after the country put to death 81 people, the largest known mass execution carried out in the kingdom in its modern history.

“When we hear this kind of news, it’s quite alarming,” F1 chief executive Stefano Domenicali said last week in an interview with British broadcaster Sky. “But I’m a true believer in the fact that sport has to make sure that human rights is at the center of our agenda, together with the country where we are going."

According to Reprieve, a non-profit organization which defends people facing human rights abuses, and partner organization the European Saudi Organization for Human Rights, a further 16 executions had been carried out by Wednesday.

When the race was held here last November, Hamilton said F1 was “duty bound” to raise awareness on human rights issues where it goes and expressed reservations about racing in Saudi.