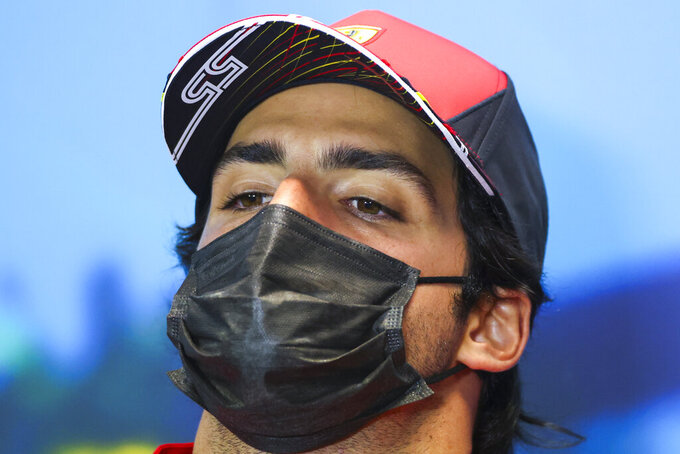 Leclerc had a time of 1 minute, 18.978 seconds on the revamped Albert Park layout, with Verstappen .245 seconds behind in his Red Bull car. Ferrari driver Carlos Sainz, who led after the first practice session, was third.

“Today has been quite positive. The grip on track was good and the bumps have definitely improved. It’s a bit smoother and it makes the track nicer as well because you can actually attack the corners a bit more," Verstappen said. “We are still a tiny bit off Ferrari, but I think this weekend we can maybe make it a little bit closer."

Local driver Daniel Ricciardo of McLaren was 10th fastest and Lewis Hamilton was 13th in his Mercedes.

There will be another practice session on Saturday ahead of afternoon qualifying for Sunday's race.

Leclerc won the opening race of the season in Bahrain and Verstappen took the second in Saudi Arabia, both in March.

In a major renovation to the Melbourne track, five corners were reprofiled at Albert Park and two were removed completely, meaning practice times were generally five seconds faster than in previous races.

The practice sessions Friday came 756 days after the 2020 race was canceled at the last minute because of the COVID-19 pandemic with spectators lining up at the gates for the first practice session on March 13 of that year.

Sainz and Leclerc were 1-2 in the first practice, but Sainz cautioned against expecting too much of his Ferrari team. That's despite Leclerc's win and a second place and Sainz a third and a second in the first two races.

“We keep saying that Red Bull and Mercedes are the favorites because we haven’t been in a title fight in the last few years,” the Spaniard said. “We are still super cautious. We know we have put together on track a great car but these two teams have been in the title fight for the last two or three years.

“They know how much they need to improve, they know exactly what they need to do. And we maybe are lacking that bit of experience."

“Even though we are leading ... we have only done two races so it’s still pretty early to think about the championship,” Leclerc said.

Leclerc said before the first practice session that he felt the track renovations might give an advantage to Red Bull.

“For our car, I would prefer to stay with the old layout but that’s only from a performance point of view,” Leclerc said. “The only reason why I’m saying that is because Red Bull seems to be very strong in the straight lines ... and there are quite a lot of straight lines in general now, so we might struggle a bit more.”

After two races, Leclerc leads the drivers' championship with 45 points, followed by Sainz with 33 and Verstappen with 25.

Verstappen hopes to improve on that after Sunday's race.

“In the long run I think everything worked well, and we’ve made some good improvements today," Verstappen said after the second session. "We are heading in a good direction and we’ll try to build from there tomorrow.”