Larson to promote Tennessee dirt race ahead of Bristol 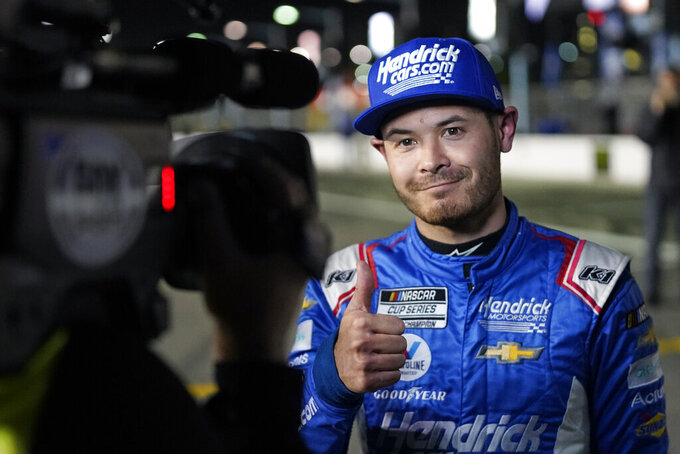 NASCAR champion Kyle Larson is partnering with sports streaming service FloSports to promote a dirt race in Tennessee that he believes his rivals can use as a tune-up for Bristol Motor Speedway.

Larson said Friday his event can be a practice session for the April 17 Cup race at Bristol, which will be covered in dirt for NASCAR for a second consecutive season.

“I want to continue to help grow grassroots racing and if I can with my NASCAR platform, I will,” Larson told The Associated Press. “I’d like to get as many Cup drivers as we can to race in the event. Bulls Gap is very similar in size to Bristol Motor Speedway, so it would be like extra practice leading into the Bristol dirt race.”

He noted that Volunteer Speedway is roughly 45 minutes away from Bristol, so fans can attend both races.

“Kyle Larson is widely recognized as one of the best drivers in the world and we are excited to collaborate with him on this race,” said Michael Rigsby, vice president of motorsports at FloSports, which will stream the race.

The partnership with Larson is part of FloRacing's commitment to assisting the growth, visibility and popularity of grassroots motorsports. FloSports last year developed the “Castrol FloRacing Night In America” series; the event will be held April 12 at Eldora Speedway, the Ohio track owned by Tony Stewart.

Larson said he's also hoping to partner with FloRacing to recreate the “Prelude to the Dream” charity race Stewart hosted at Eldora from 2005 to 2012. Larson said he'd like the race to include active and former Cup drivers.

“It’s something we’ve discussed and I’d like to plan for next year,” Larson said.