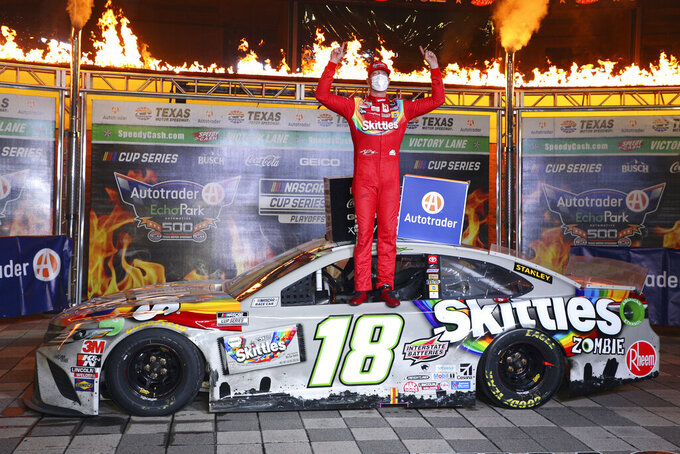 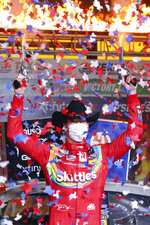 FORT WORTH, Texas (AP) — Out of contention to defend his NASCAR Cup title, Kyle Busch at least extended his season winning streak to 16 with his first victory of 2020.

He also denied a needed victory for Martin Truex Jr., his penalized Joe Gibbs Racing teammate who still has a chance to be one of the four drivers to be the new champion.

Busch won the NASCAR playoff race at Texas that finished Wednesday, three days after it started. He was 0.468 seconds ahead of Truex, and had just enough fuel left to do a celebratory burnout on the frontstretch before needing a push from a tow truck to get the No. 18 Toyota to Victory Lane.

It was 12th top-three finish this season for Truex, whose only win came at Martinsville — NASCAR's oldest and shortest track where the next race is Sunday. He also won there last fall.

Truex had to go to the back of the field when the Texas race started Sunday because of an illegal spoiler and lost crew chief James Small for the extended time in Texas. The 2017 champion and runner-up the last two seasons was also was docked 20 points, a crucial penalty since he was already below the cutoff line for the top four before that.

A win would have taken care of that.

"Coming here we had a lot of confidence and we had a strong run,” Truex said. "This time of year, second is great, it’s just not good enough.”

There are spots for three other drivers to join Joey Logano for a run at the championship in the season finale Nov. 8 at Phoenix.

Kevin Harvick, Denny Hamlin, Brad Keselowski are above the cutline going to Martinsville. Alex Bowman and Chase Elliott are both 42 points behind the cutoff, while Truex is 53 back and Kurt Busch 98.

The 57th career victory for Kyle Busch gives him at least one win in every year since 2005. The two-time Cup champion got his fourth Cup win at Texas, and his first Cup win since his championship-crowning win at Homestead last November.

“We got it and I was so nervous,” Busch said. “The last three laps. that’s like winning a championship, that’s how nervous I was.”

Busch led five times and was in front for 90 of the 334 laps at the 1 1/2-mile Texas track that was finally dried out after more than three days of misty conditions and drizzle combined with cool temperatures.

Temperatures were in the mid-40s when the race finally resumed Wednesday after being on hold for 72 hours, 28 minutes, 34 seconds. The race was red-flagged Sunday after 52 laps because of the precipitation that lingered until Wednesday morning.

Bowman finished fifth at Texas, just ahead of Keselowski and Kurt Busch. Hamlin was ninth, Logano 10th and Harvick, who had won the previous three fall races in Texas, was 16th after resuming Wednesday a lap back because of damage to his right side when he brushed the wall while leading on Sunday. Elliott finished 20th.

“I don’t know about the craziest (race), but certainly the longest. I’m glad it’s over, and I’m glad we had a great run," Keselowski said. "I’m very much looking forward to Martinsville.”

Logano secured his spot in the final four with his win 10 days earlier at Kansas to open the three-race round of eight.

Busch had just enough fuel left to do a burnout on the frontstretch and was a little slow in doing his customary winning bow.

“It's been a long time,” Busch explained about the delayed reaction and crediting his crew for leading his fuel-saving efforts. “I kept getting great leadership and mentoring. ... It ran out coming in here to do a burnout.”