Jones' Darlington win give Joe Gibbs 4 chances at a title 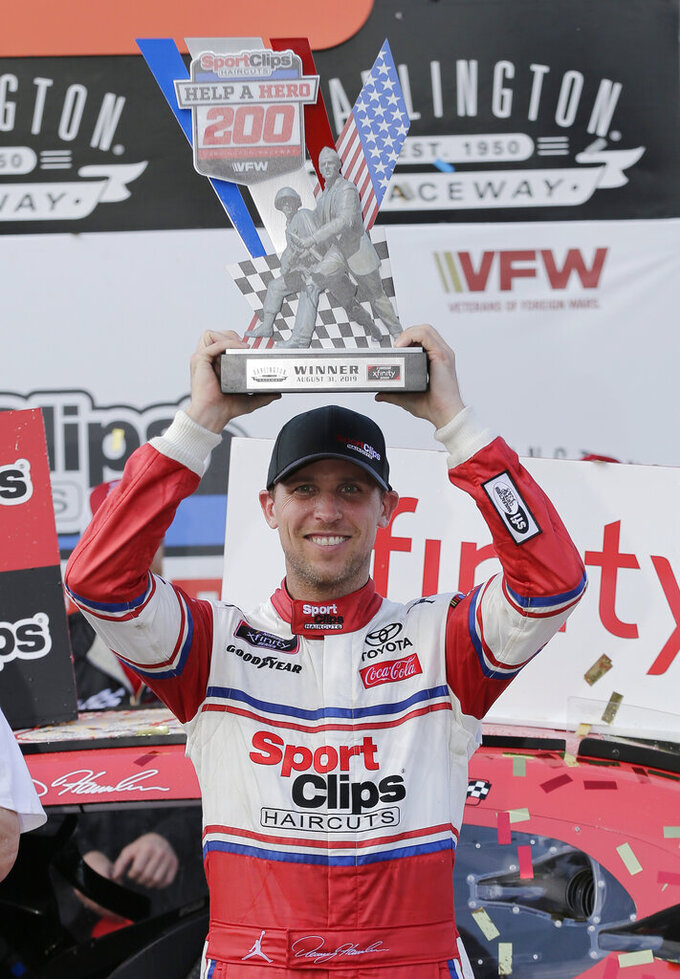 ADD HAMLIN STRIPPED OF WIN - Denny Hamlin holds up his trophy in Victory Lane after winning a NASCAR Xfinity Series auto race on Saturday, Aug. 31, 2019, at Darlington Raceway in Darlington, S.C. Hamlin was stripped of his win after he failed post-race inspection. Cole Custer was declared the winner. (AP Photo/Terry Renna)

DARLINGTON, S.C. (AP) — Joe Gibbs has had the hottest hand in NASCAR this season. Now, after Erik Jones' gritty, overnight victory at Darlington Raceway, the championship owner has four aces ready to contend for another title.

Kyle Busch, Denny Hamlin and Martin Truex Jr. have each won four times this season. The weak spot seemed to be Jones, a talented young driver carefully brought along by Joe Gibbs Racing who had yet to truly take flight in the NASCAR Cup Series.

But with Busch charging up behind the 23-year-old Jones' bumper, the youngster kept out in front to win the rain-delayed Southern 500 at Darlington Raceway in the early morning hours Monday.

It was hard sometimes, Jones acknowledged, to smile politely through early week organizational gatherings where a victory by Busch, Hamlin or Truex was celebrated.

This week, Jones gave JGR something to celebrate.

And Jones can appreciate the climb in two seasons with the organization.

"It's frustrating in a way, right," he said. "You get to the Cup Series and you think you're Superman and it's going to be really easy."

Instead, Jones was knocked around on the track at times as he figured out how to win at the sports' highest level.

He was in position to win from the pole at Bristol his rookie year of 2017 but finished second to Busch. In July 2018, Jones picked up his first Cup Series victory by outlasting Truex Jr. at Daytona. It was a long wait for his second one, and some wondered if he had the moxie to win for Gibbs.

Gibbs said earlier this summer he was excited about Jones' future.

"I think Erik can sense it," Gibbs said at Pocono in July. "And we all know with young guys, drivers have been there, once they get it, it can be something special for them. Erik's right on the verge."

Jones felt his final run at Darlington was a welcome breakthrough. He took the lead from Kyle Larson, then had to keep in front of Busch over the final 50 laps for the victory.

Jones was in solid playoff position without the win. But crew chief Chris Gayle said the team wanted to make the field the right way with a victory: "That's what feels so good to me right now."

Jones gave JGR its 13th win in 25 races this season — a show of strength that seems hard to bet against once the playoffs start in two weeks.

Hamlin had been NASCAR's hottest driver with two wins in the previous four races and was in contention before a final-stage wreck dropped him to 29th. Despite the Darlington result, Hamlin has a confidence likely to carry him far in chasing a championship.

"We like our chances each and every week against anyone," Hamlin said. "It's tough to say who's the standout right now, but we're certainly on a roll that can't be ignored."

Busch, the 2015 NASCAR champion, came from the back of the field at Darlington after an engine swap to run third. He clinched the regular-season points title at Darlington and will start in the lead for the 10-race playoff.

Truex, the 2017 NASCAR champ, joined JGR this season and has not disappointed. He has won four times and has 15 top-10 finishes.

Jones' crew chief is excited that all four JGR teams have won heading into playoffs.

"It for sure speaks to the strength of the organization," Gayle said. "Obviously, we sat around and watched the other three guys winning four races and we wanted to be a part of that. It's been an up-and-down year and there have been various things that have kept us from reaching our potential. But if you look over at the last eight to 10 weeks, there've only been a couple of races we haven't been in contention."

Gayle said he, Jones and the team talk about how close they are to regular success like their teammates.

"We're going to get those wins," Gayle said. "And more are going to come."