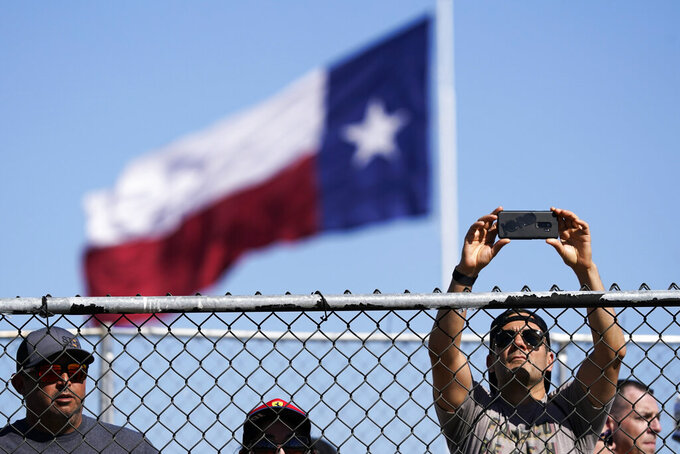 A fan takes a photo during a practice session for the Formula One U.S. Grand Prix auto race at Circuit of the Americas, Friday, Oct. 21, 2022, in Austin, Texas. (AP Photo/Charlie Neibergall)

AUSTIN, Texas (AP) — Former IndyCar champion Alex Palou had barely started his first live grand prix session behind the wheel of a Formula One car when he declared the feel and speed of the McLaren “insane.”

Friday at the United States Grand Prix saw a parade of first-timers on the Circuit of the Americas in the day's first, 60-minute session, giving the series a peek into the potential future of the drivers' grid.

Palou finished it grinning ear to ear and wanting more.

“Super happy," the Spaniard said. "It was a dream of mine."

Palou had done a test drive in a 2021 F1 car, but driving Daniel Ricciardo's current version on a live track was beyond his expectations. He drove it deep into the braking zones and corners to get everything he could out of his track time.

He also had to be careful.

“It was fast!" he said. “Then you have the traffic, you don't want to impede anybody else and you have the car that isn't yours. I was trying to take care of the car."

Formula One mandates that all teams use reserve drivers for two practice sessions this season. That put four newcomers, plus former F1 regular Antonio Giovinazzi, behind the wheel.

All brought up the rear, finishing as the bottom five in the session.

“Our program today was not to go fast," Palou said. “It was to get data.”

Palou was the biggest name in the bunch. After he won the 2021 IndyCar championship, the Arrow McLaren SP team tried to add him to its lineup for 2023. Palou was ultimately held to his existing Chip Ganassi Racing when the teams couldn't agree on a buyout.

Palou is allowed to test drive for McLaren, but he won't join McLaren's racing program until 2024. And while he said as a racer, F1 would always be a dream, he's still happy racing IndyCar.

“I still smile the same in IndyCar,” Palou said. "As a racing driver who likes motorsport, F1 is where you want to go. Throughout my career, I realized that F1 was not a place I could really achieve. I went through IndyCar and we achieved that. Funny enough, getting that IndyCar championship gave me the opportunity to be here today.

“I embraced every single second of it," he said. "I'm not chasing it. If somebody gives me a ride, I'll drive it. That's the ultimate dream. (But) I have a career in IndyCar, we've been successful and I want to get as many championships as possible.”

Sargeant shoulders a different kind of expectation and pressure. The 21-year-old could be the American driver fans in the U.S. — and major sponsors — have been longing for.

Formula One hasn’t had an American on the grid since Alexander Rossi in 2015, and hasn’t had a champion since Mario Andretti in 1978. Sargeant is currently third in the F2 feeder series.

He drove Friday in place of Nicholas Latifi, who is not being retained by Williams for 2023. The team has not yet announced a replacement and Sargeant could be in the mix.

“You have to be sensible, keep it together and do a sensible job. But it was crazy, everything would happen so quickly and so sharp,” Sargeant said.

Giovinazzi, who has 67 career F1 starts and is now a reserve driver for Ferrari, had a miserable session driving for Haas' Kevin Magnussen. The Italian had put in only a few laps when he spun and ran the car into the wall.

Ferrari topped both practice sessions, led by Carlos Sainz in the first and Leclerc leading the second. Both hope to challenge Red Bull's season champion Max Verstappen for pole position Saturday. The previous nine races have been won from the front row.

Haas driver Mick Schumacher has been put on notice that he needs to score points and not wreck his car over the final four races if he hopes to retain his seat for 2023.

The son of former seven-time champion Michael Schumacher has scored points in only two races this season, and not since Austria in July. But teammate Kevin Magnussen came to his defense this week.

“Lately he has been super hard to beat for me," Magnussen said. “I think the way he is driving right now he definitely deserves a place on the grid. But I haven’t had any influence. It is totally out of my hands and I can only just wish him well.”

Seven-time champion Lewis Hamilton of Mercedes said F1 and ownership group Liberty Media should have stepped in to help rescue the final races of the season of the financially strapped all-women W Series.

The W Series raced its third season, but dropped its final events in Austin and next week in Mexico City after a major investor fell through.

“There’s not really a pathway for those young, amazing drivers to even get to Formula 1, and then you have some people who say we’re never going to see a female F1 driver ever," Hamilton said. "So that’s not a good narrative to be putting out .... with Formula 1 and Liberty doing so well it’s not a lot for them to be able to help out in that space.”

F1 hosted a meeting Friday at the track with team principals and actor Brad Pitt, Jerry Bruckheimer and director Joseph Kosiniski for them to brief everyone on the F1 movie they are working on ... Red Bull's Sergio Perez will take a five-place grid penalty for using his fifth engine this season.